“OUR COMMON FUTURE UNDER CLIMATE CHANGE” 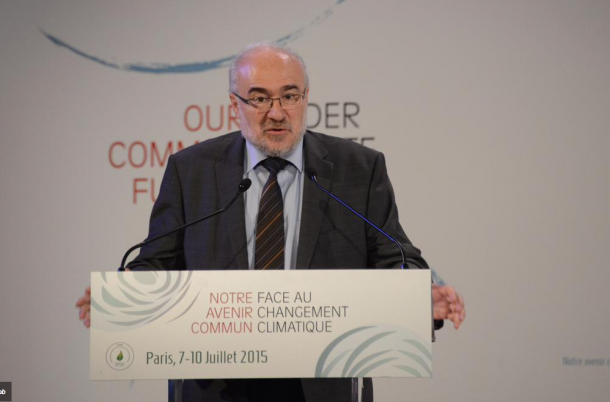 “OUR COMMON FUTURE UNDER CLIMATE CHANGE”

A major scientific conference “Our Common Future under Climate Change” opened on 7 July in Paris at the height of an intense, extensive and long-lasting European heatwave, which is consistent with the expected impacts of global warming.

The four-day conference is the largest scientific forum ahead of the climate change negotiations due to take place in Paris in December 2015. It addresses key issues concerning climate change in the broader context of global change and focusses on moving from present knowledge to future solutions.

“The world is at a critical crossroads,” U.N. Secretary-General Ban Ki-moon said in an opening message. He said that more than 40 countries, representing over half of all global greenhouse gas emissions, have so far submitted their Intended Nationally Determined Contributions to U.N. Framework Convention on Climate Change.

At the United Nations climate talks in 2010, governments agreed to a maximum temperature rise of 2 degrees Celsius above pre-industrial levels.  However, the Intergovernmental Panel on Climate Change tells us that we are heading towards average global warming of 5-6 degrees Celsius, he said.

« To bridge these gaps, it is critical to fill holes in funding, knowledge, technology, capacity and trust, » said the U.N. Secretary General.

In a keynote address to the conference, Mr Jarraud reiterated the urgency of action to reduce greenhouse gas emissions from human activities, and sounded a warning note about using geoengineering to try to limit climate change.

“The science is speaking with a clear voice,” said Mr Jarraud. “Temperatures are increasing. The water cycle is being altered. Ice and snow are melting. Sea levels are rising. Oceans are warming and becoming more acidic. Extreme weather events like heatwaves are becoming more frequent and more intense. It is the poor and the vulnerable that are paying the highest price,” said Mr Jarraud.

“Preserving our climate as a common good is becoming increasingly urgent. We still have a choice, but time is running out fast and it is critical and urgent to take action to contain the worst impacts of climate change,” he said.

Sound scientific information and climate knowledge is available to support decisions towards more sustainable patterns of productions and consumption and effective adaptation to climate change, but the response must be timely and resolute, he said.

Mr Jarraud stressed the need for better observations and more downscaled climate change scenarios and modeling to underpin climate knowledge and action, as embodied by the WMO-spearheaded Global Framework for Climate Services.

On climate or geo-engineering, Mr Jarraud said there were many different potential technologies each with a different level of complexity, uncertainty and associated risk.

“There could be unintentional consequences associated with large-scale climate engineering and the potential of these technologies should not be seen as a reason to lessen efforts to address anthropogenic climate change. Before any action is contemplated, it is important to strengthen efforts to clarify and better understand potential implications,” said Mr Jarraud.

Full details of the conference