2013 Summer Climate Outlook for the Greater Horn of Africa 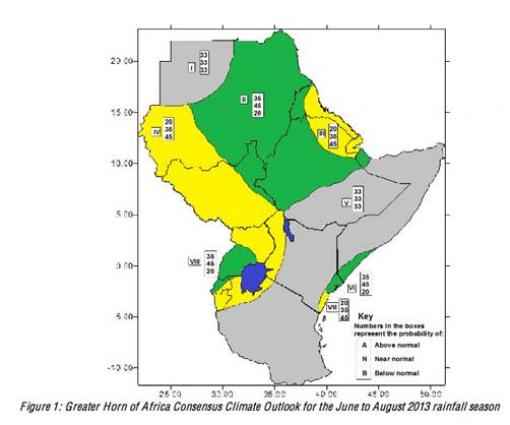 2013 Summer Climate Outlook for the Greater Horn of Africa

June to August constitutes an important rainfall season over the northern sector and western parts of the equatorial sector of the Greater Horn of Africa. The regional consensus climate outlook indicates an increased likelihood of below normal to near normal rainfall over much of the region in the forthcoming season, according to a statement issued by the Greater Horn of Africa Climate Outlook Forum. Increased likelihood of near to above normal rainfall is indicated over central parts of the northern sector as well as the coastal and extreme western parts of the equatorial sector.

Factors which are expected to influence regional climate during June to August 2013  include sea surface temperatures, especially over the Indian and Atlantic Oceans. The regional climate outlook covers seasonal timescale and relatively large areas. National meteorological services will downscale the regional outlook to provide detailed forecasts at national levels.