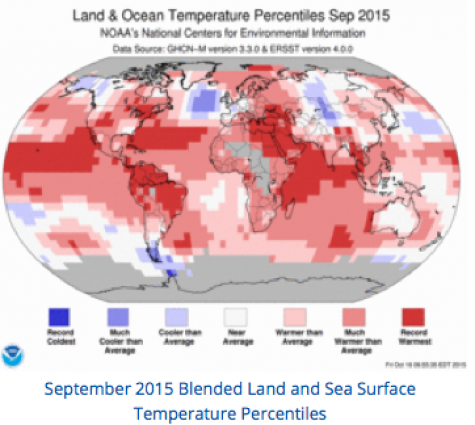 The globe just had the hottest January-September on record, as well as the hottest September.

According to the Global Climate Report from the U.S. National Oceanic and Atmospheric Administration, the  globally averaged air temperature over land and sea surface temperature for September was the greatest rise above average for any month in the 136-year historical record.

The September combined global average temperature of the air over  land and ocean surface temperature was 1.62°F (0.90°C) above the 20th century average. Record warmth was observed across much of South America and parts of Africa, the Middle East, Europe, and Asia.

With strong El Niño conditions in place, the September globally averaged  sea surface temperature was 0.81°C (1.46°F) above the 20th century average of 16.2°C (61.1°F), the highest departure for September on record, beating the previous record set last year by 0.07°C (0.13°F). This departure from average is also 0.25°C (0.45°F) higher than the global ocean temperature for September 1997, preceding the peaking up of the last strong El Niño of 1998.

WMO uses a combination of data sets to compile its annual Statement on the Status of Global Climate. The provisional statement for 2015 will be released in November 2015 to inform deliberations at the U.N. climate change conference in Paris. WMO will also release a summary of the global climate in 2011-2015.