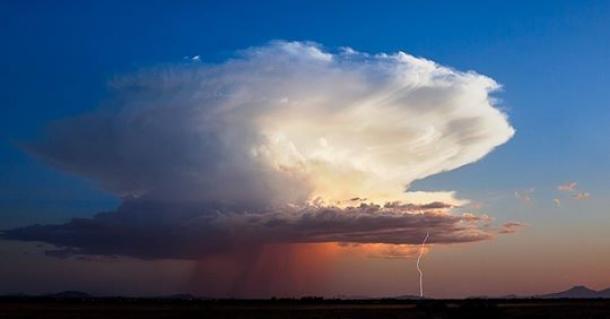 The start of 2019 has been marked by high impact weather in many parts of the world, including record heat, wildfires and rainfall in South America and Australasia,  dangerous and extreme cold in North America, and heavy snowfall in the Alps and Himalayas.

Globally, temperatures were a little over 0.4°C warmer than the average January from 1981-2010, according to the EU's Copernicus Climate Change Service. Australia continued to experience exceptionally hot conditions. Further regions with much above average temperature include the Middle East and eastern Siberia, Mongolia and northeastern China. Regions of below-average temperature were quite widespread over land and over the frozen Arctic Ocean. In Europe, temperatures were close to or just below average, it said.

The Alps experienced much above average snowfall. Along the northern parts of eastern Mediterranean and the northwest of Spain rainfall was much above average, leading to several rivers overflowing and a number of fatalities. Australia, southern Africa and eastern Brazil saw very dry conditions. Madagascar and northern Argentina saw much wetter than average conditions. The latter was severely affected by flooding, according to Copernicus Climate Change Service. 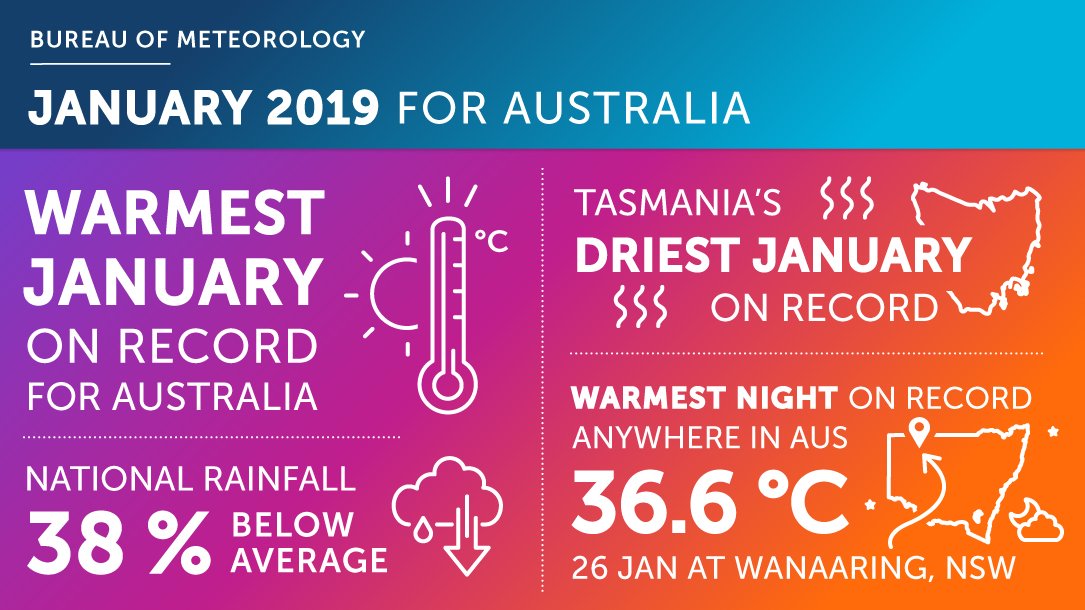 Australia faced many extremes. Parts of the state of Queensland saw record rainfall late January and early February as a result of a monsoonal trought. The town of Townsville received one year's rainfall in the space of nine days, according to the Bureau of Meteorology, prompting flooding and the evacuation of hundreds of people. The Bureau said the flood risk will continue into the first week of February.

On 5 February, the Bureau of Meteorology issued yet another flood warning for the Upper Burdekin river in Queensland. “We have done the calculations and the flow moving past Macrossan Bridge is enough to fill about 2.6 Sydney Harbours every day and still increasing!!!”

Australia saw an unusual extended period of heatwaves which began in early December 2018 and continued into January 2019. The city of Adelaide reached a new record 46.6C on 24 January. Other records in South Australia included Whyalla 48.5, Caduna 48.6°C, Port Augusta 49.1°C, according to the Bureau of Meteorology.

Large fires fuelled by extremely dry and hot conditions have been burning since mid-January in central and southeast Tasmania, the southernmost state of Australia. As of January 28, the Tasmania Fire Service reported 44 fires. The Great Pine Tier fire in the Central Plateau had burned more than 40,000 hectares. The Riveaux Road fire in the south had burned more around 14,000 hectares. News outlets reported smoke from some of the fires was visible as far away as New Zealand, and had a serious impact on air quality. The Tasmania Fire Service issued several emergency warnings to residents to relocate, as dangerous fire conditions and strong wind persist.

Many of the fires are in the world heritage area, hitting rare gondwana ecosystems only found in Tasmania which historically do not burn.

Over the past several weeks, the sea surface temperatures (SSTs) have warmed in the Tasman Sea with anomalies of +2.0˚C to 4.0˚C. Compared to the exceptional conditions at this time last year, SSTs are even warmer to the north and east of New Zealand and about equally as warm in the Tasman Sea, according to the New Zealand Institute of Water and Atmospheric Research. Given that SSTs have been significantly warmer than average for several weeks, marine heatwave conditions are likely now occurring in parts of the Tasman Sea and New Zealand coastal waters, it said.

Australia had its hottest month of December on record and its hottest December day (27 December) on record. Marble Bar, in Western Australia, recorded a temperature of 49.3 °C on 27 December.

This followed an extreme heatwave that affected the tropical Queensland coast during late November 2018. Temperatures spiked again in mid-January, topping 45°C in many places in New South Wales and central Australia on 16 January.

Heatwaves are becoming more intense, extended and frequent as a result of climate change and this trend is expected to continue.

Extreme weather in the form of heat, drought and precipitation affected widespread parts of South America in January and into February. Intense rainfall caused damage and casualties in Bolivia, Peru and northern Chile in early February, whilst heat records tumbled in southern part of the continent. 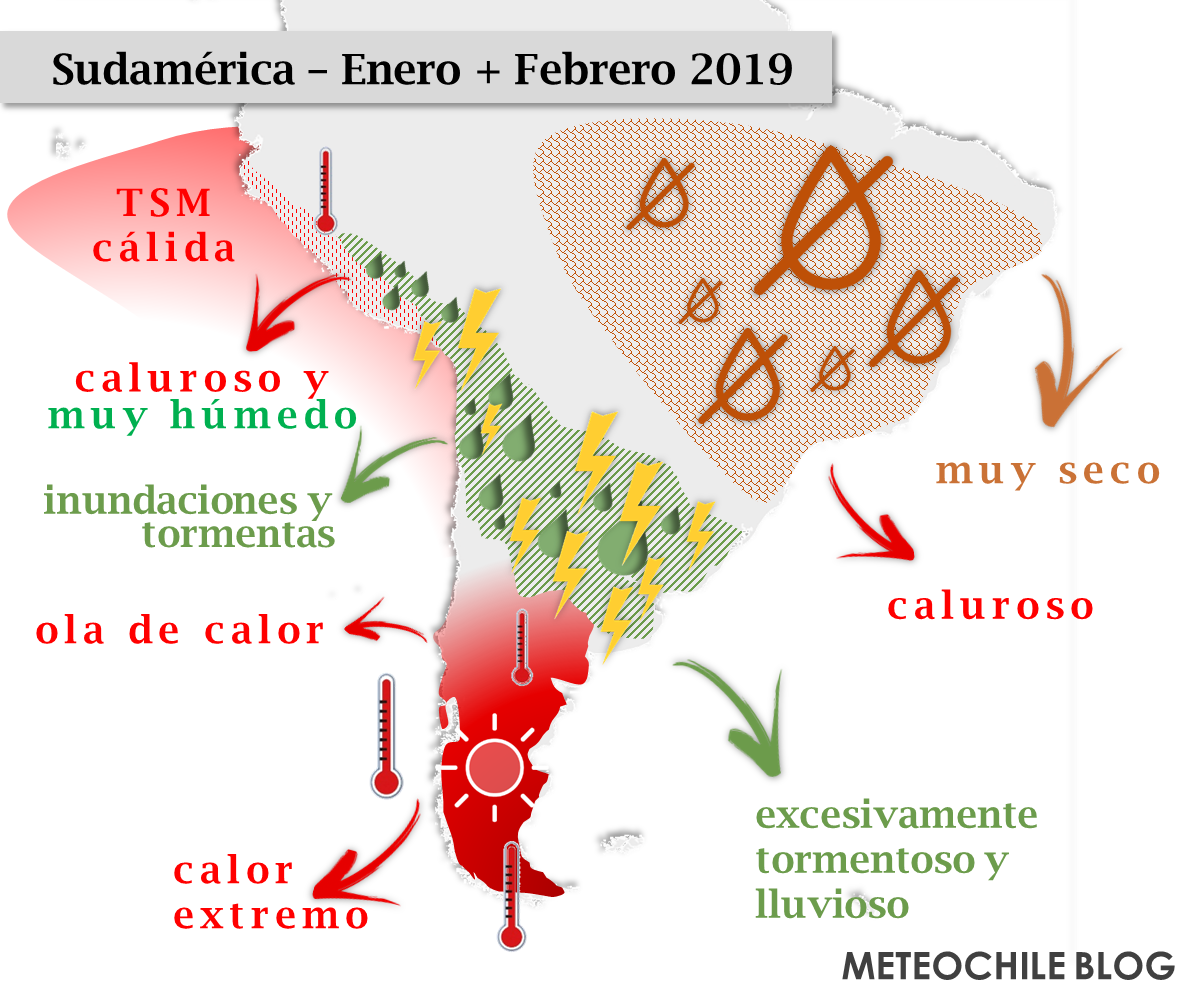 Temperatures in southern Argentina broke a number of high temperature records on 4 February, when all stations in Patagonia topped 30°C.  The temperature in Perito Moreno reached 38.2°C, and wildfires broke out in Tierra del Fuego. There was the result of an intense anticyclone on the centre-east of the country, driving warm air to all of Patagonia.

Northeast Argentina, and the adjacent parts of Uruguay and Brazil have been hit with extensive flooding, with well above the long-term expected average rainfall. On January 8, the Argentine city of Resistencia recorded 224mm rainfall. This is a new 24-hour rainfall record, much higher than the previous highest of 206mm, recorded in January 1994, according to the national meteorological service, SMN Argentina.

January 2019 was hot, following the trend recorded in recent years, 2014, 2015, 2016, 2017 and 2018, with heatwaves influencing the weather conditions in much of the country, and new historical records established. In the southeastern part of the country, state capitals have set records in Belo Horizonte (Minas Gerais) of 30.9 °C, São Paulo (São Paulo) of 31.9 °C, Vitória (Espirito Santo) of 33.3 °C. In Rio de Janeiro, a temperature of 37.4 °C was considered the second hottest since 1961. The country’s southern, where climatology has milder temperatures, recorded in Curitiba (Paraná) of 30.3 °C considered warmest since 1935 and the same occurred in Florianópolis with a record of 32.5 °C.  In Brasilia, the Federal District, in the country’s Midwest, was considered the third driest January in 57 years of measurements, with a cumulative of 70.9mm. 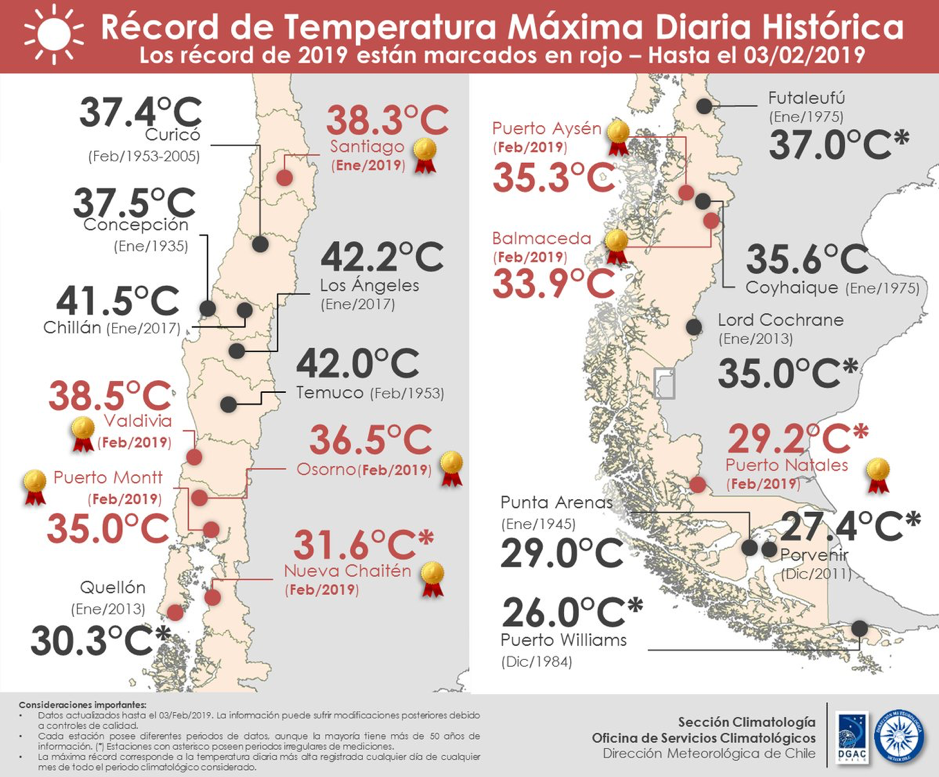 Weather extremes were seen throughout Chile, according to Meteo Chile.

Rains in the Andes led to damaging flooding as a result of water pouring into the Atacama desert,  normally one of the driest places on Earth, and causing a 60 meter waterfall that had run dry for 10 years to be reactivated by the flooding. In the south, record breaking temperatures have sparked forest fires burning thousands of hectares of land and forcing the government to declare disaster areas. More than 600 forest fires are raging throughout 9,500 hectares of land. Besides high temperatures, low humidity, high winds and drought conditions there is a man-made element to the reason these wildfires are so large.

A weather station in the capital Santiago set a new record of 38.3°C on 26 January.  In other parts of central Chile, temperatures topped 40°C, according to Meteo Chile. Heat gripped Patagonia in February, and for the first time ever, Porvenir and PuertoNatalaes in the southern tip of the country exceeded 30°C. Coyhaique reached a new record of 35.7°C and en Cochrane 36.1°C.

Paraguay also saw a number of heat records broken. On 23 January, many places saw temperatures of between 36°C and 43°C. Mariscal Estigarribia reached a new record of 44°C. One town, Pedro Juan Caballero, smashed its 1999 record by a massive 2.6°C

Tropical cyclone Desmond made landfall in Mozambique on 22 January, bringing high winds and causing flooding in the city of Beira and enhancing rainfall in Madagascar and Malawi.

Large parts of North America were gripped by an influx of Arctic air late January. Combined with gusty winds, this is producing dangerous wind chills across a significant portion of the Upper Midwest into the Northeast USA. The frigid airmass is also supporting heavy lake effect snows downwind of the Great Lakes. The US National Weather Service said that temperatures will be well below average over the Upper Mississippi Valley, Great Lakes, into parts of the Northern Mid-Atlantic. In southern Minnesota, the wind chill factor pushed readings down to minus 65°F (-53.9°C) on 30 January.  The national low temperature record was measured at minus 56 °F (-48.9°C).

The bitterly cold temperatures are caused by the influence of the Polar Vortex. This is a large area of low pressure and cold air surrounding the North Pole, with strong counter-clockwise winds known as the jet stream that trap the cold around the Pole. Disturbances in the jet stream and the intrusion of warmer mid-latitude air masses can alter the structure and the dynamics of the Polar Vortex, sending Arctic air south into middle latitudes and bringing warmer air into the Arctic. This is not a new phenomenon, although there is increasing research into how it is being impacted by climate change.

The first week of February has seen a temperature swing. Several record high temperatures were broken or tied across parts of the Eastern US on 4 February, according to the National Weather Service. This included 59°F (15°C) in Buffalo, New York, and 61°F (16°C) in Syracuse, New Jersey.

“In general, and at global level, there has been a decline in new cold temperature records as a result of global warming.  But frigid temperatures and snow will continue to be part of our typical weather patterns in the northern hemisphere winter. We need to distinguish between short-term daily weather and long-term climate,“ he said.

“Arctic has faced warming, which is twice the global average. A large fraction of the snow and ice in the region has melted. Those changes are affecting weather patterns outside the Arctic in the Northern Hemisphere. A part of the cold anomalies at lower latitudes could be linked to the dramatic changes in the Arctic. What happens at the poles does not stay at the poles but influences weather and climate conditions in lower latitudes where hundreds of millions of people live,” he said.

The eastern USA and parts of Canada saw record-breaking cold temperatures, but Alaska and large parts of the Arctic have been warmer than average. 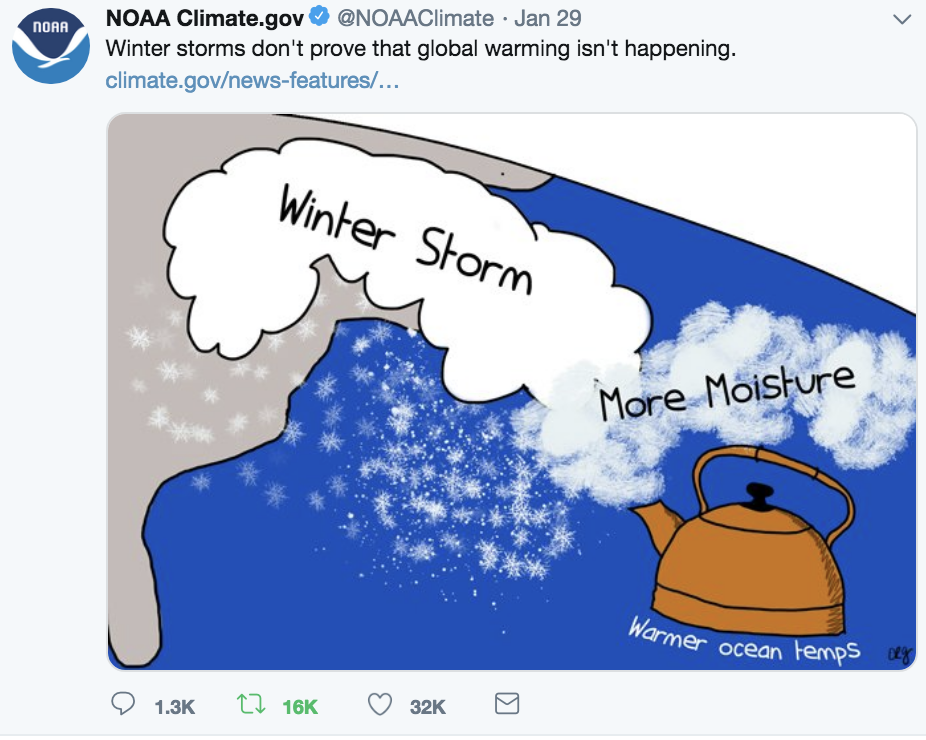 In Canada, Ottawa airport received a record 97 cm of snow on 29 January, beating the 1999 record of 93 cm, according to Environment and Climate Change Canada.

Winter snowstorms and heavy snowfall are also not inconsistent with weather patterns under a changing climate.

Parts of the European Alps saw record snowfalls earlier in January. In Hochfilzen in the Tirol region of Austria, more than 451 centimetres (cm) of snow fell in the first 15 days of January, an event statistically only expected once a century. Other resorts in Tirol also received once-in-a-century snowfalls. Eastern Switzerland received twice as much snow as the long-term average.

The German weather service or Deutscher Wetterdienst, DWD, also issued a number of top-level snow and winter weather warnings. Climate projections show that winter precipitation in Germany is expected to be more intense, according to the German Weather Service, DWD. This will necessitate adaptation measures, for instance in regulations for buildings to withstand the weight of snow.

During the month, severe winter storms have hit the eastern Mediterranean and parts of the Middle East, with particularly severe impacts on vulnerable populations including refugees.

A cold front in the third week of January that swept south through the Arabian Peninsula, bringing a widespread dust storm from Egypt to Saudi Arabia, Bahrain, Qatar, Iran and the United Arab Emirates, brought heavy rain and precipitation to Pakistan and northwest India.

The Indian Meteorological Department issued warnings on 21 January of heavy or very heavy rain and snow for Jammu and Kashmir and Himachal Pradesh, prompting warnings of avalanches amid an intense cold wave.