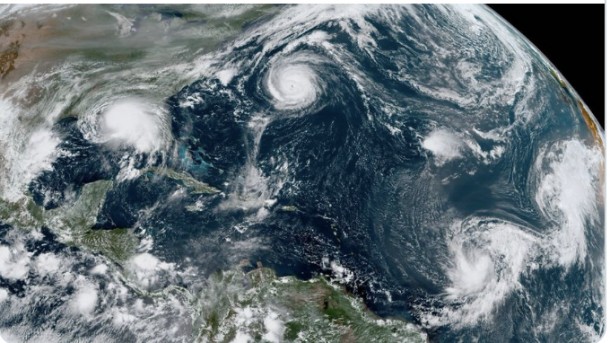 The 2020 Atlantic hurricane season is so active that it has exhausted the regular list of storm names. The Greek alphabet is now being used for only the second time on record.

Sub-tropical storm Alpha formed and dissipated over Portugal on 19 September. On 21 September, tropical Storm Beta is approaching the central Texas coast as a very slow-moving storm which is expected to produce a long duration rainfall event from the middle Texas coast to southeast Louisiana, causing flash, urban and minor river flooding.  The US National Hurricane Center warned of life-threatening storm surge near times of high tide.

On 14 September, the US National Hurricane Center issued advisories on five tropical cyclones over the Atlantic basin (Paulette, Rene, Sally, Teddy and Vicky). This ties the record for the most number of tropical cyclones in that basin at one time, last set in September 1971. 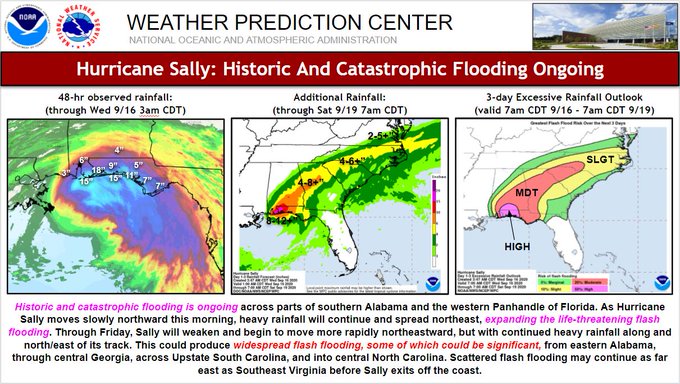 Hundreds of thousands of people were without electricity and there was at least one reported death. Images from the town of Pensacola showed trees downed, debris and boats thrown about and streets flooded. A water level station in Pensacola reported inundation around 5.5 feet (1.6 meters) above sea level, the National Hurricane Center said.

WMO maintains rotating lists of names in alphabetical order for tropical cyclones. Male and female names are alternated, and the lists are used every six years. If a hurricane is particularly devastating or deadly, its name will be retired and a new one selected.

As predicted by the US National Oceanic and Atmospheric Administration, the 2020 season has seen an exceptionally high number of named storms, reaching the letter V (Vicky) as of Monday 14 September. Vicky is the earliest 20th Atlantic named storm on record.  The old record was set by Vince on October 9, 2005. The season lasts until 30 November.

The hurricane name lists include only 21 letters out of 26, because it is not easy to find 6 appropriate names (for the 6 rotating lists) starting with Q, U, X, Y and Z. In the interests of safety, names must be easily recognizable. In addition, they have to reflect a balance between French, Spanish and English names due to the geographical coverage of the storms throughout the Atlantic and Caribbean, and respect societal sensitivities.

The use of the Greek alphabet (Alpha, Beta, Gamma, Delta, Epsilon, Zeta, Eta, Theta, etc) has only happened once before in 2005, when six names from the Greek Alphabet were used. This was a record-breaking year with devastating hurricanes including Katrina, Rita and Wilma, whose names were all retired.

The name of a tropical cyclone may be retired or withdrawn from the active list at the request of any Member State if that tropical cyclone acquires special notoriety because of the human casualties and damage incurred. It is through consensus opinion of the members (or the majority, if required) during the session of the WMO Regional Association IV Hurricane Committee immediately following that season, that the name would be withdrawn from the active list.

The  Hurricane Committee annual session in 2006 discussed the use of the Greek alphabet for hurricane naming, and whether a Greek Alphabet name should be retired as done for a regular name when it meets the criteria for retirement.

The Committee felt that the use of the Greek Alphabet was not expected to be frequent enough to warrant any change in the existing naming procedure for the foreseeable future and therefore decided that the naming system would remain unchanged and that the Greek alphabet would continue to be used.

In this connection, the Committee also agreed that it was not practical to “retire into hurricane history” a letter in the Greek Alphabet. It therefore decided that if a significant storm designated by a letter of the Greek Alphabet, in either the Atlantic or eastern North Pacific Basin, was considered worthy of being “retired”, it would be included in the list of retired names with the year of occurrence and other details, but that the particular letter in the Greek Alphabet would continue to be available for use in the future”.

Considerations for 2019 storm name retirements was not completed and will be addressed at the 2021 meeting (43rd session) of the WMO Regional Association IV Hurricane Committee, as the 2019 names will not be used again until 2025. The 2025 name list will not be updated until the 2021 meeting has been completed.