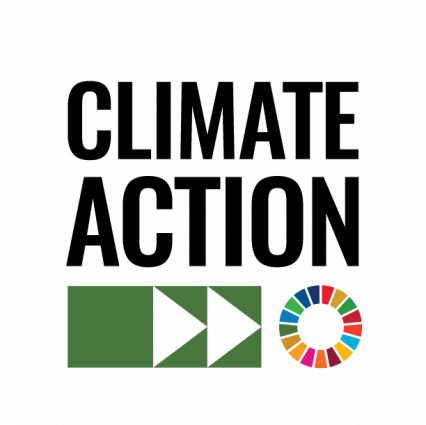 The need for climate action to underpin sustainable development and COVID-19 recovery plans features high on the agenda of the United Nations General Assembly, marking the 75th anniversary of the organization. Its theme is “The Future we Want, the UN we Need: Reaffirming our Collective Commitment to Multilateralism.”

At the opening session of the General Assembly, Chinese President Xi Jinping raised the level of climate ambition by announcing that China would aim to become carbon neutral by 2060. The week has also seen major announcements from the European Union, as well as from companies and local authorities around the world. 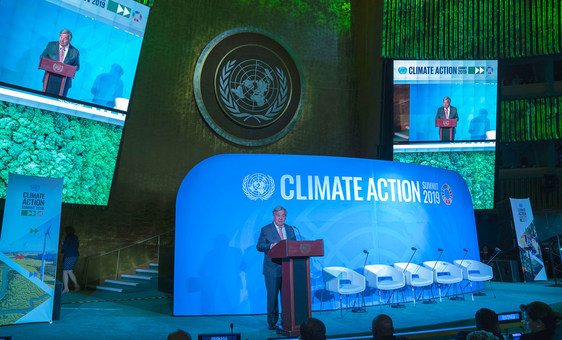 UN Secretary-General António Guterres convened a high-level Climate Change Roundtable of global leaders on 24 September  to galvanize commitment to meeting the Paris Agreement targets to keep temperature increase to between 1.5°C and 2°C.

“The damage to people and the environment is immense and growing. The recent United in Science report from the World Meteorological Organization is unequivocal,” said Mr Guterres.

“The past decade was the hottest on record. And concentrations of greenhouse gases have continued to rise. Carbon dioxide emissions from fossil fuels and forest fires reached an all-time high in 2019 and are 62 per cent higher than in 1990,” he said.

“We must urgently reverse course. And we have less than ten years to do so,” said Mr Guterres.

The Roundtable is meant to raise the debate ahead of the Fifth Anniversary of the Paris Agreement when some governments are expected to present ambitious and quality climate plans (the Nationally Determined Contributions and the Long-Term Strategies.

Invited speakers included the two governments presiding over the climate change conference of Parties (COP), President Sebastian Piñera of Chile (COP25) and Prime Minister Boris Johnson of the United Kingdom (COP26) as well as ten Heads of State and Government from the African and Asia regions, the Small Island Developing States and the European Union and some corporate leaders. It focussed on:

The Roundtable heard plans for a global event on 12 December, the fifth anniversary of the Paris Agreement, this year to rally much greater climate action and ambition.

National governments will be invited to present more ambitious and high-quality climate plans (the Nationally Determined Contributions – NDCs – and Long-Term Strategies), as well as COVID recovery plans, new finance commitments and measures to build resilience that are aligned with limiting global war 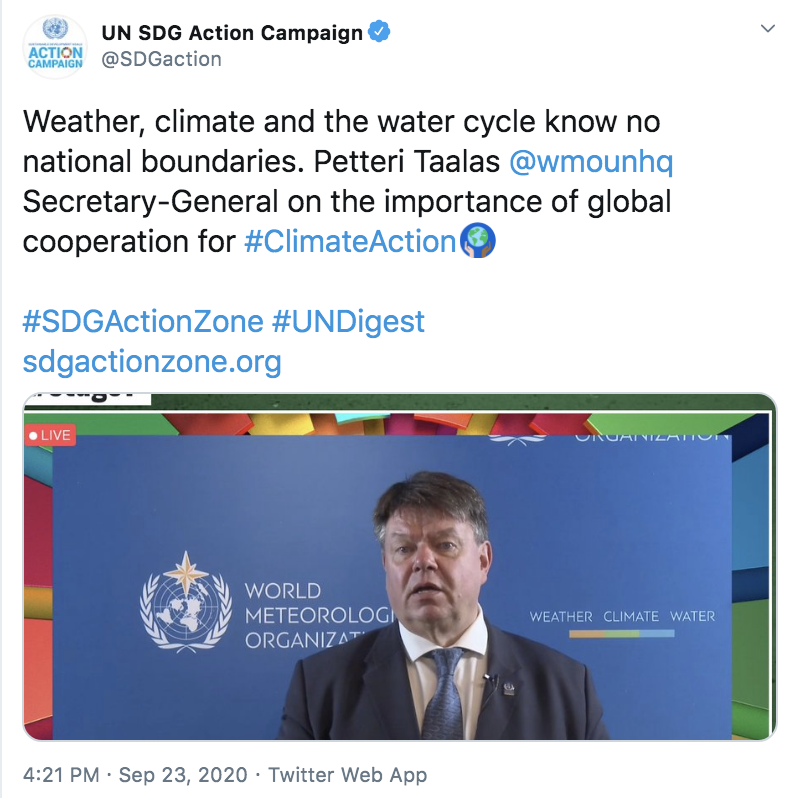 ming to 1.5°C and the driving forward the Sustainable Development Goals.

On 23 September, a Climate Action Event at SDG Action Zone organized by UN Climate Change highlighted stories of people creating change – and explain how everyone can become part of the solution.

“If we fail with climate change mitigation we will see more dramatic things than we have seen because of COVID-19. The failure of climate mitigation would see challenges which would last hundreds of years,” said WMO Secretary-General Petteri Taalas in a video message during a debate on the Sustainable Development Goals.

To mark its 75th anniversary, the United Nations launched “a global conversation” in January using surveys and polls to find out what all kinds of people were thinking about the future. UN Secretary-General António Guterres called the results “striking:”

“People are thinking big — about transforming the global economy, accelerating the transition to zero carbon, ensuring universal health coverage, ending racial injustice and ensure that decision-making is more open and inclusive,” he said. “And people are also expressing an intense yearning for international cooperation and global solidarity.”