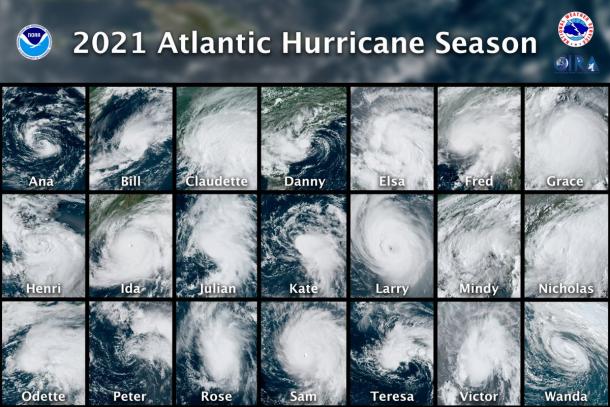 The 2021 Atlantic hurricane season officially concluded on 30 November. It was so active that, for the second consecutive year, it exhausted the regular list of names from WMO’s rotating list. Accurate forecasts and coordinated early warnings protected life and property throughout the season.

This year was the third most active year on record in terms of named storms, according to the U.S. National Oceanic and Atmospheric Administration. It marks the sixth consecutive above-normal Atlantic hurricane season. It was the first time on record that two consecutive hurricane seasons exhausted the list of 21 storm names.

WMO maintains rotating lists of names in alphabetical order to alert the public of potential hazards. Male and female names are alternated, and the lists are used every six years. If the list of names is exhausted, a supplemental list can be used. If a hurricane is particularly devastating or deadly, its name is retired and a new one selected.

This above-average hurricane season was accurately predicted by NOAA’s Climate Prediction Center  in its May and August outlooks. The U.S. National Hurricane Center, which acts as WMO’s Regional Specialized Meteorological Centre, delivered accurate and timely forecasts and operational guidance products for the entire North Atlantic, Central America and Caribbean basin.

Hurricane Ida stands out as the season’s deadliest and most damaging storm. At its peak, Ida was category 4 on the Saffir Simpson scale. Ida tracked through the Caribbean, leaving a trail of destruction in Cuba and other islands. It made landfall near the city of New Orleans on 30 August, on the 16th anniversary of Hurricane Katrina and caused widespread infrastructure damage and power outages in the US State of Louisiana.Ida transitioned to a post-tropical cyclone as it moved through the northeastern USA, breaking multiple rainfall records, causing disruption to transport systems and triggering deadly flash-flooding which caused dozens of casualties.

This season’s storm activity started early and quickly ramped up, as it was the seventh consecutive year with a named storm forming before the official start to the season on June 1, and held the earliest fifth named storm on record. By contrast, October and November were unusually quiet in terms of cyclone activity.

Climate factors, including La Niña, above-normal sea surface temperatures earlier in the season, and above-average West African Monsoon rainfall were the primary contributors for this above-average hurricane season, according to NOAA scientists.

Another contributing factor is a phenomenon known as the Atlantic Multidecadal Oscillation, which entered a warm phase in 1995 which favors more, stronger, and longer-lasting storms.

The Intergovernmental Panel on Climate Change's Sixth Assessment Report, released in August 2021, projects with high confidence that the global proportion of tropical cyclones that reach very intense (category 4-5) levels, along with their peak winds and rainfall rates, are expected to increase with climate warming at the global scale.