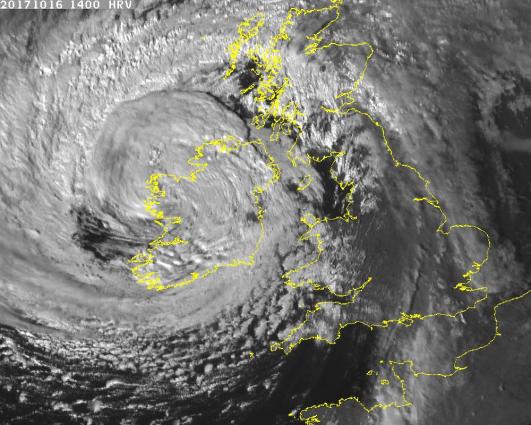 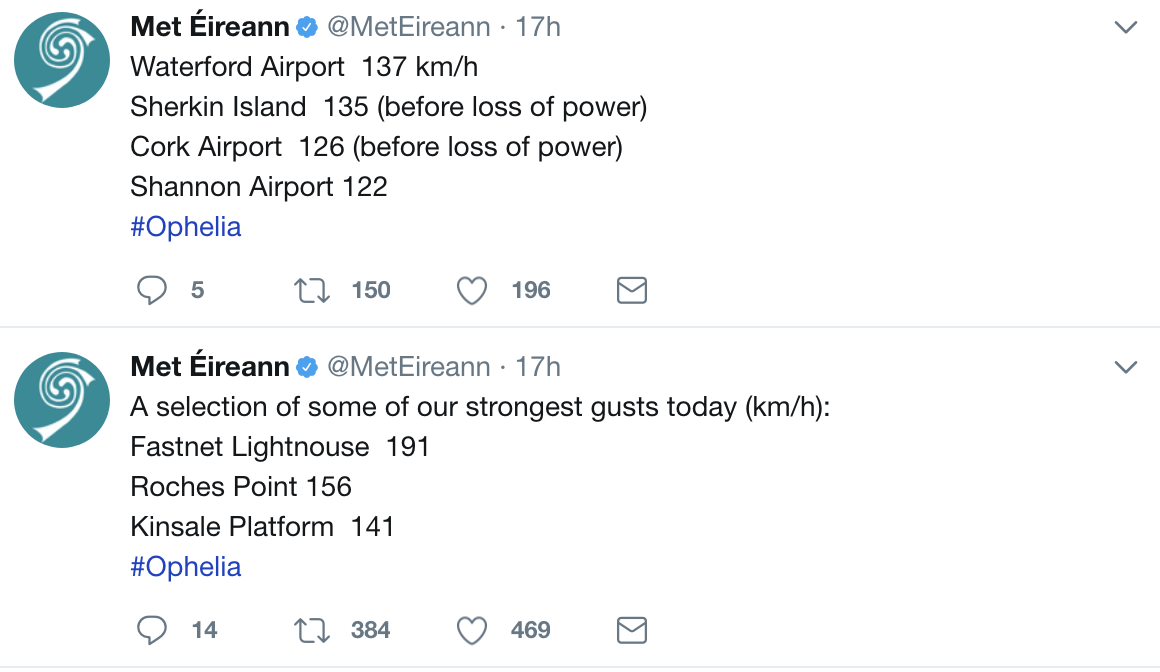 The national meteorological and hydrological service, Met Eireann, issued a rare maximum Red Alert for the entire country. It said the strongest gust of wind was recorded at FastNet Lighthouse 191 km/h.

There are reports of at least 3 deaths. The casualty toll would have been higher without the reliable and timely alerts provided by meteorological services.  The storm hit Republic of Ireland and UK exactly 30 years since the so-called Great Storm of Britain which hit southern England and killed 22 people and caused 1 billion pounds in damage.  Lessons learned from that storm led to huge improvements in severe weather forecasting in the UK and beyond.

Along with the winds there were many exceptionally high temperatures in many parts of Europe,

Temperatures in Spain on Sunday were up to 36°C, up to 13°C above normal, according to AEMET. Even in Netherlands temperatures were up to 25°C, a record for mid October.  In France a number of daily temperature records were broken on 16 October – for instance  26.1°C à Calais, 27.7°C in Colmar, and 28.5°C in Bordeaux

Strong winds and heat from Ophelia contributed to the spread of devastating fires in northern Portugal and Spain.  In Portugal there were more than 500 firest reported burning on 16 October, with reports of 37 deaths and widespread health problems due to the fires.

This in turn led to orange skies in London and other parts of UK and France as Ophelia pulled up a combination of Sahara dust and smoke from forest fires in Portugal and Spain.  On 17 October, there were images of a red sun as a result of the aerosol dust even northern Europe (including Sweden and Finland). 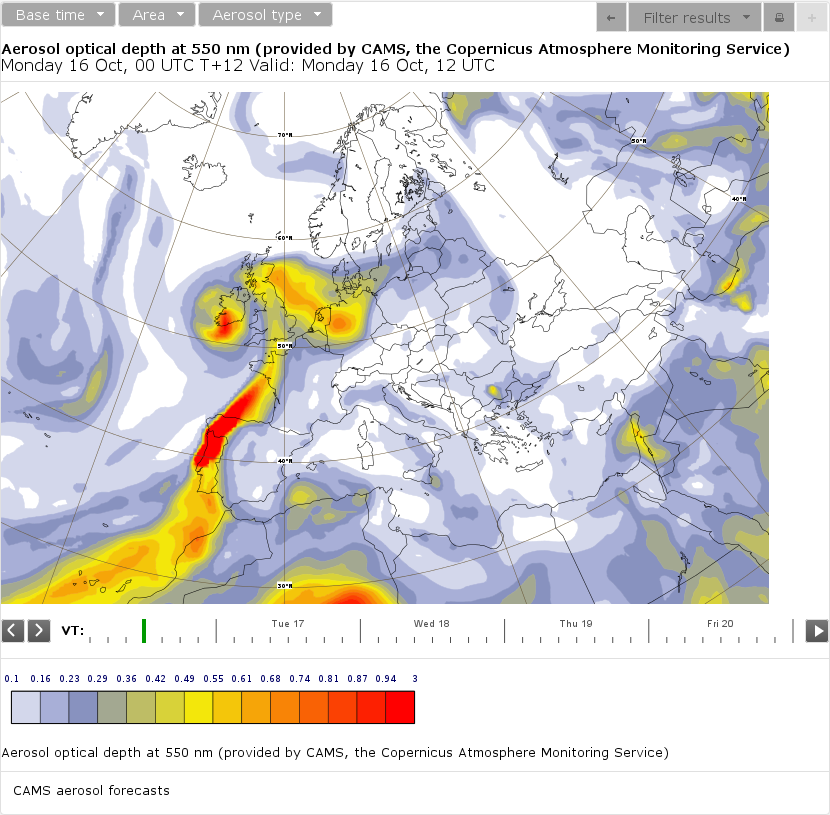 An outlook issued by the National Oceanic and Atmospheric Administration (NOAA) on May 25, 2017 stated, “The outlook reflects our expectation of a weak or non-existent El Nino, near- or above-average sea-surface temperatures across the tropical Atlantic Ocean and Caribbean Sea, and average or weaker-than-average vertical wind shear in that same region,” said Gerry Bell, Ph.D., lead seasonal hurricane forecaster with NOAA’s Climate Prediction Centre”.

There have been been 10 hurricanes (average 6.5 for 1981-2010), 154% of normal and 6 major hurricanes (above category 3), compared to average of 2 – 300 percent increase.  The accumulated Cyclone Energy (ACE)  - measure to express the activity of individual tropical cyclone and entire tropical cyclone seasons – has been 222 compared to an average of 92 – 241 percent increase.

The 2017 season has been particularly warm in the region of the Atlantic where hurricanes form with temperatures 0.5 to 1.0C above average, according to NOAA. Likewise, a wetter and stronger monsoon in West Africa and a natural cycle called the Atlantic Multi-Decadal Oscillation (AMO) have also helped boost the energy available for the massive, swirling heat engines that hurricanes become. 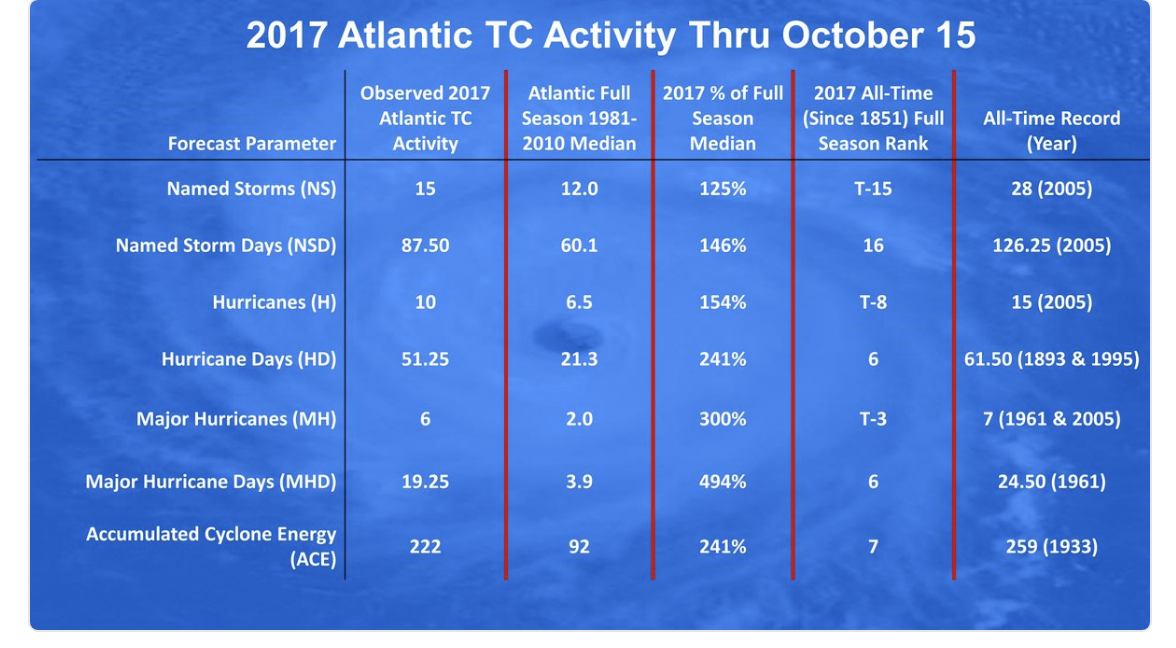 According to an article published by NOAA’s Geophysical Fluid Dynamics Laboratory, “Most researchers who study extreme events like hurricanes agree that climate change is most likely making the impacts of these events much worse. Rising temperatures lead to warmer air holding more moisture, which causes more intense downpours in a hurricane. The oceans have risen thanks to thermal expansion and glacier melt and this works to increase the dangers posed by storm surges. In terms of the factors that control the genesis and the intensification of these hurricanes, a number of these point to the fact that they will undoubtedly be slightly more severe due to the extra heat content in the ocean due to the long-term warming of the climate. The warming of the climate has increased the underlying probabilities of very heavy rain events like happened in Harvey and very high category hurricanes like Irma”.

Hurricane Irma, which devastated Barbuda, was a Category 5 hurricane for three consecutive days – this is the longest on satellite record. Irma’s winds reached 300 kilometers per hour for 37 hours -- the longest on record at that intensity. Hurricanes Harvey and Irma marked the first time that two Category 4 storms made landfall in the United States in the same year. They were followed by Hurricane Maria, which decimated Dominica and had severe impacts across Puerto Rico.