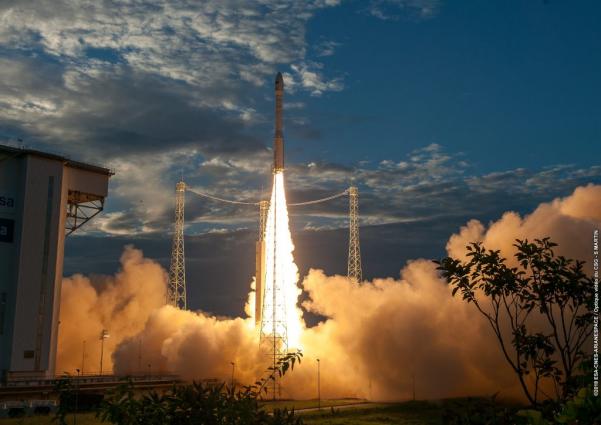 The European Space Agency’s (ESA) Earth Explorer Aeolus satellite has been launched into polar orbit. Using revolutionary laser technology, Aeolus will measure winds around the globe and play a key role in the quest to better understand the workings of our atmosphere. Importantly, this novel mission will also help improve weather forecasting.

A Vega rocket carrying the 1 360 kg Aeolus satellite lifted off from Europe’s Spaceport in Kourou, French Guiana, on 22 August. It is named after Aeolus, who in Greek mythology was appointed ‘keeper of the winds’ by the Gods.

WMO welcomed the mission as a “very significant step forward in space-based measurements for weather and climate.”

“Aeolus will provide the first vertically resolved wind measurements from space - something WMO has had at the top of its list of unmet observational requirements for more than 20 years,” said Lars Peter Riishojgaard, head of the WMO Integrated Global Observing System (WIGOS).

“The lack of global coverage of wind observations limits our understanding and prediction of weather and climate. Aeolus will provide a pioneering demonstration of the most promising technology to fill this gap,” said Mr Riishojgaard.

Aeolus will provide an eagerly anticipated first space-based demonstration of what is widely seen as the most promising technology to fill this critical gap, namely Doppler lidar.

Aeolus will give scientists the information they need to understand how wind, pressure, temperature and humidity are interlinked.

It will provide insight into how the wind influences the exchange of heat and moisture between Earth’s surface and the atmosphere – important aspects for understanding climate change.

Even though Aeolus is a demonstration mission, the operational meteorological community is planning to use its measurements in real-time routine operations, with significant forecast and analysis improvements expected as a result.

“WMO is very appreciative of the fact that ESA decided to not only develop and demonstrate this important technology, but to also make significant efforts to make its data available to the meteorological community in near-real time,” said Mr Riishojgaard, who attended the launch event hosted by ESA at its European Space Operations Centre in Darmstadt, Germany. Mr. Riishojgaard has been a member of the Aeolus Mission Advisory Group, an expert body providing independent scientific advise to ESA regarding this mission, since 2001.

“Aeolus epitomises the essence of an Earth Explorer. It will fill a gap in our knowledge of how the planet functions and demonstrate how cutting-edge technology can be used in space,” said Jan Wörner, ESA Director General.

The satellite is being controlled from ESA’s European Space Operations Centre. Controllers will spend the next few months carefully checking and calibrating the mission as part of its commissioning phase.