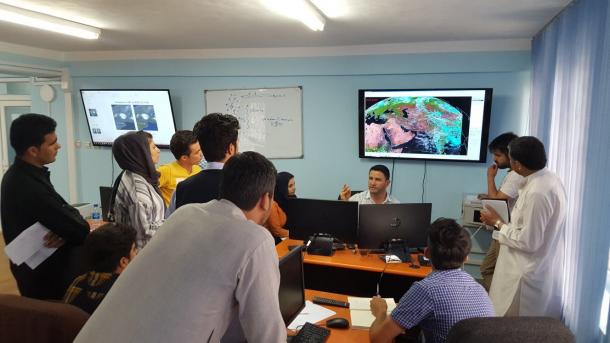 On 14 August 2017, the Afghanistan Meteorological Department (AMD) issued its first flood early warning for the country’s south and southeast regions. The following day, meteorological satellite images verified that AMD’s forecast was accurate: a devastating flood had occurred in Khost province.

While more remains to be done to determine the most effective way of delivering early warnings to Afghanistan’s vulnerable communities, this event shows how far AMD has advanced in providing accurate and timely severe weather warnings.

This progress comes with the support of the Afghanistan Early Warning Project, a joint effort between the World Meteorological Organization (WMO) and the U.S. Agency for International Development/Office of U.S. Foreign Disaster Assistance (USAID/OFDA). The project has been building the capacity of AMD to provide severe weather forecasts and early warnings, in particular for floods and flash floods. Afghanistan is highly exposed to hydrometeorological hazards, which claimed close to 15,000 lives and cost an estimated USD 396 million in economic losses from 1980 to 2015, according to the International Disaster Database, Centre for Research on the Epidemiology of Disasters (CRED).

AMD issued its first flood warning only a week after a meteorological satellite data reception, visualization and processing station was installed in the country through this project. Using this access point, AMD can now receive satellite images and products from Meteosat-8, a EUMETSAT operational geostationary satellite located over the Indian Ocean. The EUMETCast Severe Weather and Convection Detection product was a key tool for AMD for forecasting the heavy precipitation that caused the flood.

The extensive capacity and infrastructure building undertaken prior to the flood event made this milestone possible. A thorough renovation of the AMD facilities ensured that the infrastructure needed for service delivery was in place: uninterrupted power supply, a dedicated forecasting room, IT equipment with ample computing power, local and wide area networks, sufficient Internet bandwidth, and meteorological data processing and visualization software.

With these significant investments in infrastructure and training, AMD forecasters were well equipped to forecast this severe weather event and issue an early warning.

“More work lies ahead of us, but this milestone brings us closer to reducing the loss of life and property in Afghanistan with the help of accurate and timely severe weather forecasts and early warnings,” said Sayed Reza Mousawi, director of AMD.

“Improving the capacity of AMD to deliver severe weather and flash flood warnings will reap benefits for Afghanistan as well as the rest of the South Asian region,” said Johannes Cullman, director of the WMO Climate and Water Department.