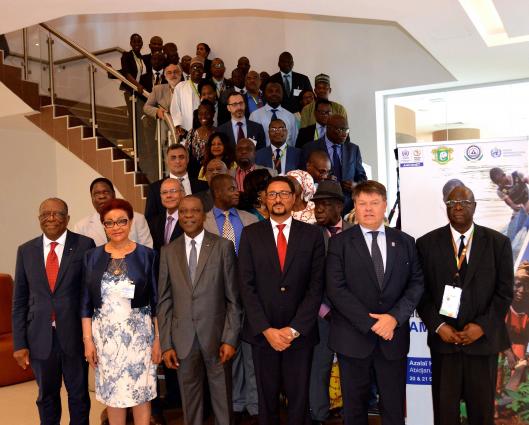 WMO is ramping up its drive to mobilize political and financial support to strengthen hydrometeorological services in Africa in order to boost climate adaptation and sustainable development.  A series of meetings and high-level discussions in the space of a week focussed on challenges and solutions - including through access to the very latest satellite technology and initiatives to improve weather forecasts and early warnings.

Ahead of the UN General Assembly, WMO Secretary-General Petteri Taalas participated in a high-level meeting on 24 September with UN Development Programme Administrator Achim Steiner and the Africa Union Commissioner for Rural Economy and Agriculture, Josefa Sacko, on how to scale up resources to help African countries adapt to climate change and associated extreme weather.

Mr Taalas travelled to New York directly from a ministerial-level forum convened by the Economic Community of West African States (ECOWAS) and the Bureau Meeting of the African Ministerial Conference on Meteorology (AMCOMET) in Abidjan, Cote d’Ivoire, from 19 to 21 September. These called for firmer political commitment, resource mobilisation and allocation, a workable funding strategy as well as increased advocacy on reliable disaster data management best practices.

“It is now the time to shift from words to action,” Amadou Kone, Minister of Transport of Cote d’Ivoire, told the ECOWAS Hydromet Forum. He was supported at the podium by Gilberto Correia Silva, Minister of Agriculture and Environment of Cabo Verde and Chair of the Bureau of AMCOMET.

“For example, in the past four years, my small country has suffered from two major droughts, floods and from Hurricane Fred,” he told the meeting of the AMCOMET Bureau.

About 70 percent of disasters in the region are caused by severe weather and climate events, as highlighted by recent devastating flooding in Nigeria.

For WMO, Mr Taalas stressed WMO’s commitment to increase resilience and climate adaptation in support of the international agenda on sustainable development.

“A very powerful way to adapt to climate change is to invest in early warning services and disaster risk reduction activities. Here we have been able to bring both political decision makers and development partners and technical expertise that WMO is providing together, and by joining our forces we can have a big impact at the country level," he said.

“Africa needs weather and climate information for planning its development. We need to move to a time when our farmers will be informed as to when to expect the rains and plan their crops. The time is now for our citizens to be updated on weather for the day through their mobiles and other devices. Early warning systems are badly needed to avert disasters,” said Josefa Sacko.

“I therefore believe that during this meeting, you will come up with long-term measures to ensure that these services are guaranteed to our people on a sustainable basis. On this note, allow me to assure you of the African Union’s commitment to support Member States in their endeavour to develop their weather and climate services,” she said.

The ECOWAS Hydromet Forum took place from 19 to 21 September. It was organized by the ECOWAS Commission in collaboration with the World Bank and the Global Facility for Disaster Reduction and Recovery (GFDRR), WMO, AMCOMET, the government of Cote d'Ivoire and other partners. The Bureau Meeting of AMCOMET, whose Secretariat is hosted at WMO, was held in parallel.

WMO launched a West Africa project funded by the Climate Risk and Early Warning System (CREWS) initiative during the Forum.

The objective of the CREWS West Africa project is to build the capacity of sub-regional institutions for operational severe weather, flood and climate forecasts in the 17 Member States of ECOWAS and the Permanent Interstate Committee for Drought Control in the Sahel (CILSS).

The CREWS West Africa project will test and promote innovative tools and solutions for agrometeorology, food security and civil protection, both for slow-onset hazards like drought and rapid-onset hazards such as floods. It will also facilitate exchange of knowledge and best practices among West African and Sahel countries, with the establishment of a Community of Practice among countries engaged or about to engage in large investments for early warning systems (Burkina-Faso, Chad, Côte d’Ivoire, Mali, Niger, Togo).

In an important step promising big future benefits with better use of satellite technology, the so-called Abidjan declaration was signed. This was in the context of the EUMETSAT User Forum in Africa, held every two years, to facilitate the use of EUMETSAT satellite data by national meteorological services throughout the continent.

Meteosat Third Generation (MTG) satellites will be launched by EUMETSAT in 2021, replacing the medium-term the Meteosat Second Generation satellites, and will provide more 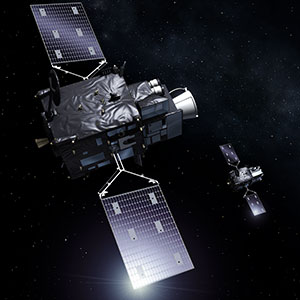 frequent and accurate observations of weather and climate over the African continent until 2040.

This will provide a significant improvement of space-based monitoring of weather and climate over Africa for the next two decades, which will necessitate an increase and strengthening of existing capacities in Africa, at regional and national levels, to ensure access and exploitation of its data.

As a result, there is a significant need to strengthen African capacities at regional and national levels to ensure a smooth transition to the MTG satellites and secure access to, and exploitation of satellite data and products in support to the objectives of the Integrated African Strategy on Meteorology (Weather and Climate Services), and in line with the African Space Policy and Strategy;

The Abidjan declaration signalled agreement in principle between relevant African institutions, WMO, AMCOMET and EUMETSAT to jointly mobilize resources to enable the above.