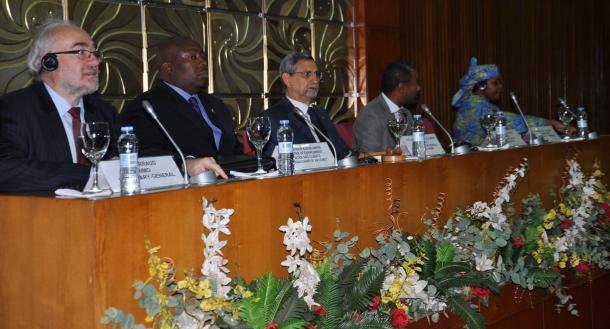 Ministers responsible for meteorology in Africa have renewed their commitment to National Meteorological and Hydrological Services (NMHSs) and endorsed a roadmap to strengthen service delivery.

The Third Session of the African Ministerial Conference on Meteorology (AMCOMET-3) was hosted by the government of Cabo Verde, in Praia, from 13th -14th February 2015. The session focused on strengthening resilience to climate change and extreme weather through improved weather and climate services. These are vital to food security, water resource management, disaster risk reduction and health, as well as other key economic sectors like transport, energy and tourism.

“Knowledge, research and innovation are all vital to the competitiveness of the African economy and to allow us to meet weather, water and energy challenges,” said Dr. Emanuel Antero Veiga, Minister for Environment, Housing and Territorial Planning and chair of the meeting.

“Meteorology has no boundaries and AMCOMET is a platform of dialogue and exchange. It is a platform for us to discuss common concerns and come up with common solutions," said Dr.  Veiga.

The Praia Ministerial Declaration reaffirmed the need for National Meteorological and Hydrological Services to be given “all necessary resources and adequate institutional frameworks to enable them to fully meet their mandates and perform their roles as fundamental components of the national development infrastructure of their countries and of the continent.”

AMCOMET-3 discussed the Implementation and Resource Mobilization Plan of the Integrated African Strategy on Meteorology, which provides concrete ways to enhance the delivery of weather and climate services needed to build the continent's ability to respond to climate change.

The Praia Ministerial Declaration noted that “the plan is an important tool to mobilize resources through partnerships and collaboration to build much needed resilience for communities and economies in Africa.”

Ministers endorsed plans for a new Regional Climate Centre (RCC) for Central Africa to consolidate research and forecasting capabilities for this sub-region in line with similar existing centres in eastern, southern, west and north Africa.

The AMCOMET session also backed the establishment of a partnership between the African Climate Policy Centre (ACPC), AMCOMET and WMO to create and oversee the Climate Research for Development (CR4D) as pan-African research agenda to help advance climate research on the continent and improve services to end users.

Ministers considered how to ensure that the interests of the meteorological community are reflected in the draft pan-African Space Policy and Strategy. An AMCOMET taskforce will work towards developing an implementation plan for the African Regional Space Programme in collaboration with the African Union (AU) space working group and other ministerial conferences.

Ministers noted progress made by African countries in complying with the International Civil Aviation Organization (ICAO) and WMO technical regulations on Quality Management Systems (QMS). About 56% of African countries are currently QMS compliant; The Praia Ministerial Declaration agreed to “elevate QMS requirements to the national agenda, which is critical for the safety of air navigation over the African skies and a mandatory requirement by the International Civil Aviation Organization (ICAO).”

The Praia Ministerial Declaration praised WMO’s Severe Weather Forecasting Demonstration Project (SWFDP) for improved information in early warning forecasts for disaster risk reduction. The Declaration recognized that SWFDP has been successfully implemented in southern and eastern Africa, as a flagship for the continent and urged for its implementation in other sub-regions of west, central and north Africa.

The ministerial conference approved the budget and constitution of AMCOMET, which was set up in 2010 under the auspices of the African Union Commission (AUC) and WMO. The conference agreed that the next session of AMCOMET would take place in Tunisia in 2016.