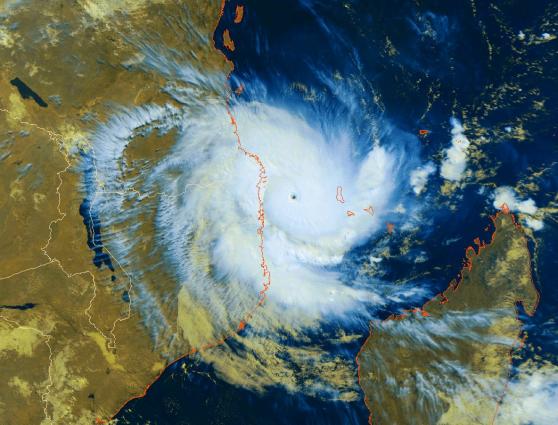 A few weeks after IDAI which wreaked havoc on central Mozambique (and eastern Zimbabwe), the country is dealing with another unprecedented event. Tropical Cyclone Kenneth made landfall in northern Mozambique on 25 April, near the border with Tanzania, in an area where no tropical cyclone has been observed since the satellite era. There is no record of two storms of such intensity striking Mozambique in the same season. Torrential rainfall in the days following the cyclone worsened the problem and hampered humanitarian operations.

The northern city of Pemba, which escaped the brunt of the initial impact from Kenneth, experienced some of the worst of the rainfall. From 27 to 28 April, 168.7 mm of rain fell in 24 hours and from 28-29 April, it was as much as 254.7 mm. The province of Cabo Delgado suffered extremely severe flooding and landslides, with severed transport links and cut off communities, making the relief effort even more difficult. Dozens of fatalities were reported, in addition to the hundreds from Cyclone Idai.

The Office for the Coordination of Humanitarian Affairs (OCHA) released emergency funding and appealed for additional resources.

There were advance warnings about the path and strength of Kenneth, and Mozambican authorities evacuated thousands of people from the most vulnerable areas. Tanzania also issued top-level red alerts to warn of the dangers from rain, floods and landslides. Kenneth hit the Comoros Islands en route to Mozambique, causing widespread damage and casualties. According to WMO’s Regional Specialized Meteorological Centre, La Reunion, operated by Météo-France, Kenneth intensified very rapidly from the equivalent of a category 1 storm to a strong category 4 storm. It weakened slightly before making landfall in a fairly rural region north of the city of Pemba (between the islands of Tambuzi and Matemo and near a town called Mucojo). Initial reports still rank it at landfall as the equivalent of a Category 4 storm on the Saffir Simpson scale, with averaged winds of more than 100 knots (185 km/h) and gusts of up to 270 km/h.

The RSMC La Reunion had warned that it was an “extremely dangerous system," with life threatening storm surge when landing on the Mozamibican coast of between 3 to 5 meters in some areas south of the landfall. There are currently no data available about the size of the actual storm surge.

Mozambique is still struggling with the aftermath of Cyclone Idai, which hit further south.

This cyclone season in the South West Indian Ocean has been exceptionally intense, with 15 storms, including 9 intense cyclones. It is now tied with the record season of 1993-1994.

Cyclone Kenneth occurred on the eve of a week-long WMO fact-finding mission to Mozambique to discuss with authorities the lessons learned from Cyclone Idai and future measures to improve the effectiveness of early warnings and public safety.  The impact of climate change and sea level rise on Mozambique’s resilience to such tropical cyclones and extreme weather is also likely to feature in the discussions.