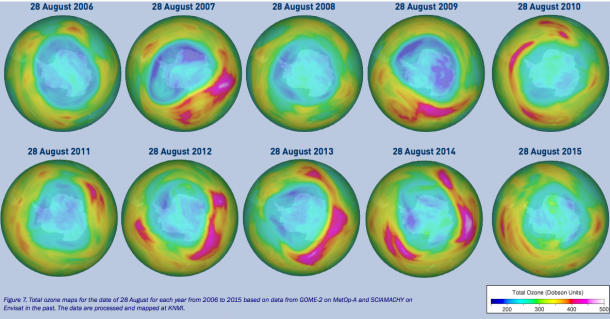 WMO has published the first issue in the 2015 series of the Antarctic Ozone Bulletin, with information on the state of the ozone layer in Antarctica and surrounding areas.

Measurements with ground-based instruments and with balloon sondes from some stations in the Global Atmosphere Watch network show first signs of ozone depletion, according to the bulletin. Satellite observations show that the area where total ozone is less than 220 DU (“ozone hole area”) has been significantly above zero since 18 August. This is a relatively late onset of ozone depletion.

The ozone hole area on 27  August was approx. 5.1 million km2, about half the long-term average. The date of the onset of ozone depletion varies considerably from one year to the next, depending on the position of the polar vortex and availability of sunshine after the polar night. In 2015, the vortex has been relatively stable and concentric around the South Pole. This can explain the late onset of ozone depletion.

As the sun returns to Antarctica after the polar night, ozone destruction will speed up. It is still too early to give a definitive statement about the development of this year’s ozone hole and the degree of ozone loss that will occur. This will, to a large extent, depend on the meteorological conditions.

However, the temperature conditions and the extent of polar stratospheric clouds so far indicate that the degree of ozone loss in 2015 will be similar to that observed in 2014 and 2013 and probably somewhat larger than in 2010 and 2012.

WMO and the scientific community will use ozone observations from the ground, from balloons and from satellites together with meteorological data to keep a close eye on the development during the coming weeks and months.  The bulletin is issued at roughly two-three week intervals from August to November. The bulletins are based on data provided by WMO Members which operate ozone monitoring stations in the southern hemisphere.