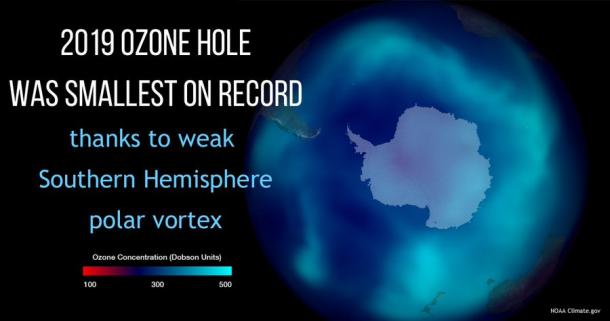 In 2019, the hole that developed in the ozone layer over Antarctica was the smallest on record since the ozone hole was first discovered, according to scientists at NASA and the US National Oceanic and Atmospheric Administration.

“It’s great news for ozone in the Southern Hemisphere,” said Paul Newman, chief scientist for Earth Sciences at NASA's Goddard Space Flight Center in Greenbelt, Maryland. “But it’s important to recognize that what we’re seeing this year is due to warmer stratospheric temperatures. It’s not a sign that atmospheric ozone is suddenly on a fast track to recovery.”

The long-term recovery of the ozone layer is underway but is still expected to take years, according to the 2018 quadrennial review from the Scientific Assessment Panel of the Montreal Protocol, which controls ozone depleting substances. Northern Hemisphere and mid-latitude ozone is projected to heal completely by the 2030s followed by the Southern Hemisphere in the 2050s and Antarctic by 2060, according to report. WMO is one of the contributors to the Scientific Assessment and its Global Atmosphere Watch network stations monitor ozone, both in the troposphere, the lower 10 km of the atmosphere (where it is a pollutant), and in the stratosphere, 10 to 50 km above the ground (where it provides protection from the sun's harmful ultraviolet rays.

The weather system  causing the rapid rise of stratospheric  temperatures also lead to weakening of the Antarctic polar vortex, a slowly-spinning pool of stratospheric air trapped by a ring of fierce westerly winds—the polar night jet—that emerges in the upper stratosphere during winter at the South Pole. The region poleward of the polar jet includes the lowest temperatures and the largest ozone losses that occur anywhere in the world.

The breakdown of the polar vortex helped the ozone hole in two ways. The early season warmth minimized further formation and persistence of polar stratospheric clouds. Because these clouds enable the chemistry that produces ozone-destroying substances, fewer clouds meant less ozone destruction.The weak polar vortex also allowed more ozone-rich air from lower latitudes of the Southern Hemisphere to mix into the polar stratosphere and partially patch the hole that had begun to form. The lingering warmth prevented it from reforming.

This is the third time in the last 40 years that weather systems have caused warm temperatures that limit ozone depletion. Similar weather patterns in the Antarctic stratosphere in September 1988 and 2002 also produced atypically small ozone holes.

There is no identified connection between the occurrence of these unique patterns and changes in climate.