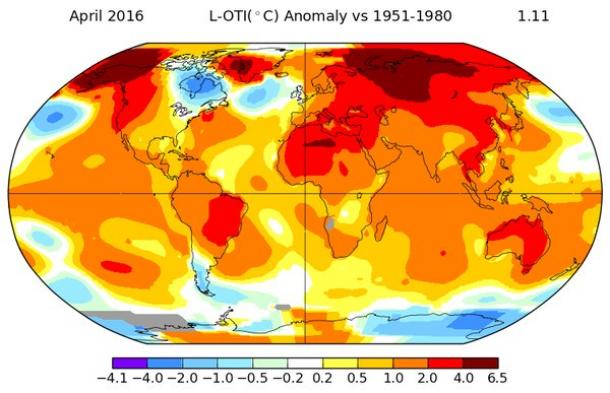 Global temperature records were broken yet again in April for the 12th consecutive month, the longest such streak in the 137-year record of the U.S. National Oceanic and Atmospheric Administration (NOAA). Overall, 13 out of the 15 highest monthly temperature departures in the record have all occurred since February 2015.

The global analysis from NOAA confirmed the findings of separate datasets from NASA and the Japan Meteorological Administration.

“Another month, another record,” said WMO Secretary-General Petteri Taalas. “The extraordinary heat that was recorded in 2015 pales by comparison to 2016. It is a combined effect of climate change and El Nino,” said Mr Taalas.

“El Niño is fading fast and will probably give way later this year to La Niña. But any cooling effect from La Niña will be temporary and will not be enough to rein in the global warming from greenhouse gases,” said Mr Taalas.

“The rapid implementation of the Paris Climate Change agreement is taking on the utmost urgency, if the ambitious 1.5-2.0 C targets would be reached,” said Mr Taalas.

“For the first time ever, carbon dioxide concentrations in the southern hemisphere have joined those in the northern hemisphere and passed the 400 parts per million level. They are likely to stay there. This is more than just a symbolic threshold. At the current rate of increase in CO₂ levels, we are on track to reach the 2°C temperature limit within the next two generations,” said Mr Taalas.

Measurements at Cape Grim on Tasmania’s northwest coast reached the 400 ppm milestone on 10 May and at Casey Station in Antarctica on 14 May, according to CSIRO and the Bureau of Meteorology of Australia. The stations form part of WMO’s Global Atmosphere Watch network, which spans 100 countries, including stations high in the Alps, Andes and Himalayas, as well as the Arctic and Antarctic. 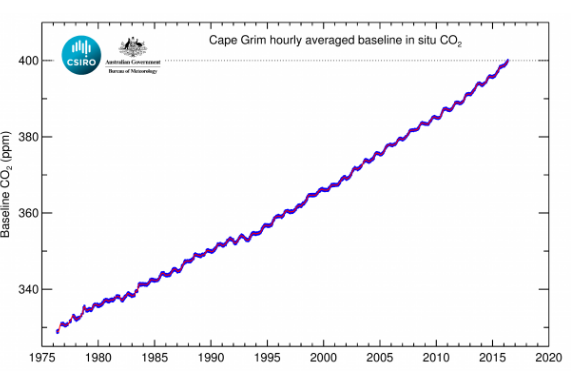 CO₂ concentrations over the southern hemisphere are trailing those in the planet’s northern half, where 400 ppm level was breached in 2014-15.

Human activity has increased the direct warming effect of CO₂ in the atmosphere by 50 percent above pre-industrial levels during the past 25 years, according to NOAA's 10th Annual Greenhouse Gas Index

According to the NOAA monthly temperature report, much of Russia and Alaska witnessed temperatures of at least 3.0°C (5.4°F) or greater above average. South America, Africa, and Asia (with an exceptional heatwave in Southeast Asia) also had record high average temperatures.

The April globally averaged sea surface temperature was 0.80°C (1.44°F) above the 20th century monthly average, the highest on record.