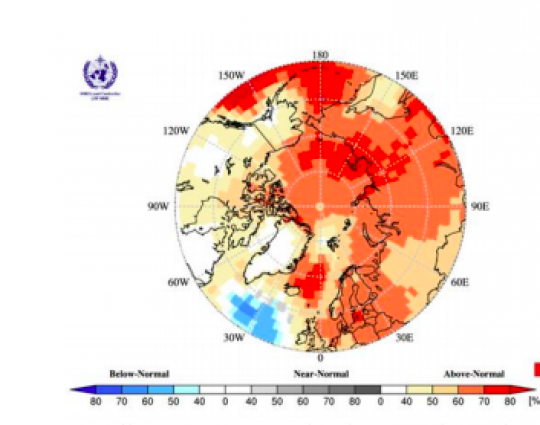 The forum (ACF-5) was held on 27-28 May 2020 as a virtual meeting led by the Arctic and Antarctic Research Institute (AARI), Roshydromet. It brought together nearly 90 participants from 12 countries representing meteorological services, shipping industry, indigenous people, and other key partners and decision makers.

ACF-5 presented key climate information on the state of Arctic climate (temperature, precipitation and sea-ice) during Winter/Spring 2019/20 and the Arctic Summer 2020 outlook.

Warmer than normal surface air temperatures over Eurasia and the Arctic Ocean contributed to below to near normal ice conditions during the 2019-2020 winter across the entire Arctic. Forecast variability in above normal temperatures and wetter-than-average conditions across the different Arctic regions for June–August 2020 are contributing to the spatial variability in spring break-up and minimum sea ice extent forecast for the summer of 2020.

Precipitation: Wetter than average conditions during FMA 2020 were observed across the majority of the Arctic. Wetter than normal conditions are expected to continue across Alaska, and portions of the Chukchi, Eastern Siberia, and northern Canadian regions.

Sea-ice: The Northern Hemisphere March 2020 maximum sea-ice extent was the 11th lowest since 1979. Earlier than normal spring break-up is expected for the majority of the regions across the Arctic, with the exception the Barents Sea, Greenland Sea, and the eastern half of Hudson Bay, where a later than normal spring break-up is expected. Below normal 2020 minimum sea ice extent are forecast for majority of the Arctic regions; exceptions are above normal conditions forecast for the Barents and Greenland Seas.

Annual surface air temperatures over the last 4 years (2016–2019) in the Arctic (60°–85°N) have been the highest on record. The volume of Arctic sea-ice in the month of September 2019 (after the melting season) has declined by more than 50% compared to the mean value for 1979–2019. To support Arctic decision makers in this changing climate, the recently established Arctic Climate Forum (ACF) convened by the Arctic Regional Climate Centre Network (ArcRCC-Network) under the auspices of the World Meteorological Organization (WMO) provides consensus climate outlook statements in May prior to summer thawing and sea-ice break-up, and in October before the winter freezing and the return of sea-ice.

The overall impression of the Forum by the end-users was strongly positive and productive. The ACF was recorded, and the video can be viewed here. The presentations from ACF-5 can be found here.

The consensus statement is available here.