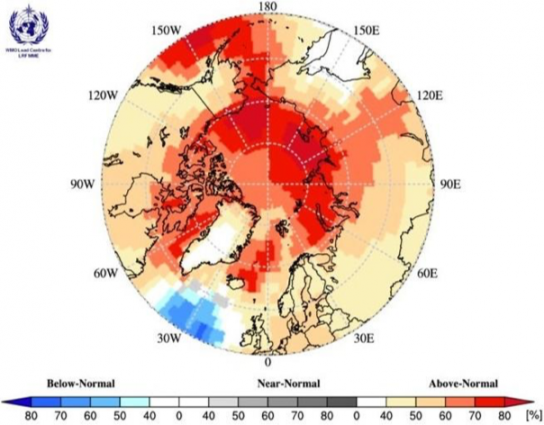 Following a warmer than average summer, surface air temperatures during winter 2019-2020 are forecast to be above normal across most of the Arctic. according to the Arctic Climate Forum, which also issued forecasts for sea ice and precipitation.

Arctic temperatures continue to warm at more than twice the global mean. Annual surface air temperatures over the last 4 years (2014-2018) in the Arctic have been the highest on record since 1900.

The extent of winter sea-ice is at record low levels, and the volume of Arctic sea-ice present in the month of September has declined by more than 50% compared to the mean value for 1979-2018.

To support Arctic decision makers in this changing climate, the new Arctic Regional Climate Centre Network now provides climate outlooks in May prior to summer thawing and sea-ice break-up, and in October before the winter freezing and the return of sea-ice. It is part of an international drive to improve climate and sea-ice forecast.

The fourth session of the Arctic Climate Forum was held via video-conference on 30 October 2019. Hosted by WMO and coordinated by the Norwegian Meteorological Institute, it was attended by the member countries of the Arctic Council, as well as representatives from the Arctic shipping and indigenous organizations.

It concluded that the previous summer was warmer than average over most of the Arctic domain, with Eastern Siberia experiencing its warmest mean summer temperature on record.

Exceptions are north central Canada and the northwestern part of Russia, where average surface air temperatures were below normal. The September minimum sea-ice extent was the second lowest on record since 1979 (tied with 2007 and 2016). Sea ice volume was also significantly lower in comparison to 2018 (thinner ice).

The outlook for the upcoming winter months indicates that the average surface air temperatures are likely to be above normal for the entire Arctic for November, December 2019 and January 2020 (see figure). The fall freeze-up of sea ice is expected to be earlier than normal in the Barents Sea, and normal for Hudson Bay. For all other regions the fall sea-ice freeze-up is expected to be later than normal.

The reality of climate change and its impacts prompted the need for  Pan-Arctic seasonal predictions, based on the well-established  Regional Climate Outlook Forum collaborative process pioneered by the World Meteorological Organization (WMO).

Users at the national levels are advised to consult their respective National Meteorological and Hydrological Services who can add more detail to the regional outlooks in the national context.

The next session of ACF will be held as a face-to-face meeting in May 2020 to consider the outlook for boreal summer of 2020. The aim is to hold the meetings on a regular basis to bring together the science community, key decision-makers and important partner organizations to discuss priority products for climate-sensitive users. All ACF sessions will include indigenous participation, as climate change impacts affect all aspects of their day-to-day life.  More information is available here. 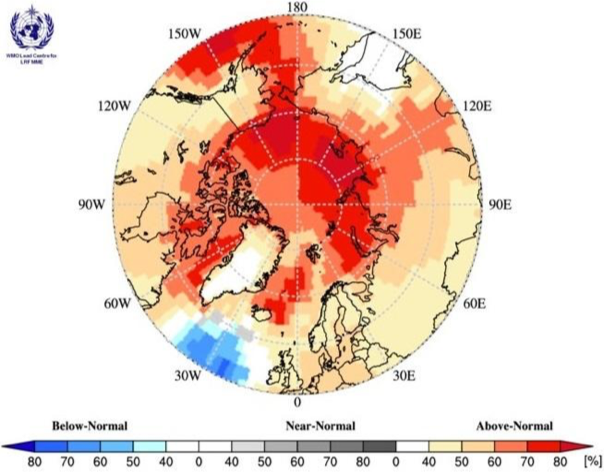