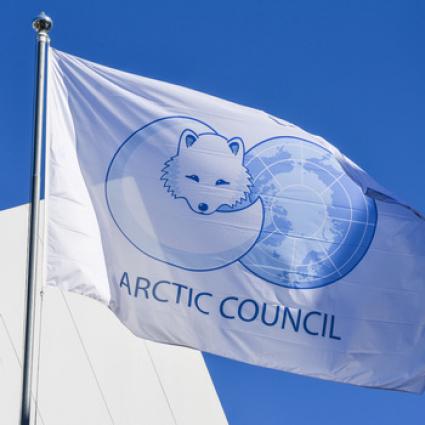 Increased meteorological cooperation in the Arctic is one of the focuses of a series of meetings taking place this week in Finland, attended by a top-level WMO delegation.

WMO President David Grimes and Secretary-General Petteri Taalas addressed an Arctic Meteorology summit in Levi, which was opened by Finnish Minister of Transport and Communications Anne Berner and Finland's Ambassador for Arctic Affairs Aleksi Härkönen. It brought together directors of Arctic and European meteorological services, the heads of the European Centre for Medium Range Weather Forecasts and EUMETSAT, specialists from companies operating in the Arctic region, and local community leaders including the President of the Finnish Sámi Parliament.

The meteorological summit on 20 March was intended to share knowledge among different stakeholders and to strengthen observations in one of the most data-sparse regions of world. It came ahead of a Senior Arctic Officials’ meeting,  which brings together representatives from the eight Arctic States, the six indigenous Permanent Participant organizations, six Working Groups, and over 30 Observer states and organizations. WMO was granted observer status at the Arctic Council in May 2017.

Like nowhere else on our planet, the Arctic is going through unprecedented change and warming at least as twice as fast as rest of globe.

“Chatham House rules don’t apply in the Arctic,” said WMO Secretary-General Taalas. “What happens in the Arctic does not stay in the Arctic,” he said. Weather anomalies in lower latitudes are related to shrinking Arctic sea ice, whilst the contribution of the melting of the Greenland ice sheet to sea level rise has almost tripled, he said.

The current Arctic winter will very likely be confirmed as the warmest on record. Rising temperatures are causing permafrost to thaw, and this is causing irreversible changes to landscapes, said WMO President Grimes.

“There is a strong need for better monitoring, observations and predictions in Arctic regions to monitor and track the type and pace of changes. There is a need for long-term sustained commitment for action to monitor the state of the Arctic climate and to understand the role of the Arctic in the earth system. This is a priority for climate science,” he said.

"The impact of climate change will be largely visible in society, and therefore research and services will be needed in various fields. The biggest contribution of the Arctic Meteorology Summit has been the dialogue between climate experts from different countries and policymakers, representatives of the industrial world, safety authorities and the indigenous peoples", said Juhani Damski, Director General of the Finnish Meteorological Institute, which hosted the meteorological summit.

A concrete example of cooperation that has already been launched is the new satellite product published by the Finnish Meteorological Institute which monitors the ice and snow situation of the Northern Hemisphere almost in real time. The ice data in the service comes from the Norwegian-operated OSI SAF project, which is funded by EUMETSAT. The Finnish Meteorological Institute provides the data on snow cover.

WMO is working to establish an Arctic-Polar regional climate centre network to disseminate more information to stakeholders and local communities. It is also spearheading the Year of Polar Prediction to improve observations and forecasts in both the Arctic and Antarctic. The Arctic Winter Special Observing Period started on 1 February.

WMO is also strengthening its Global Cryosphere Watch programme, which is designed to acquire and distribute data and derived products relevant to the cryosphere (i.e., sea ice, lake ice, river ice, snow cover, glaciers, ice caps, ice sheets, and frozen ground, which includes permafrost). Implementation of the Global Cryosphere Watch was discussed at a meeting of WMO’s EC Panel on Polar and High Mountain Observations, Research and Services, which took place in Levi on March 21-23. WMO President Grimes has co-chaired the panel of experts since its inception, alongside a representative from the Southern Hemisphere. One of the activities under its guidance is to better understand and monitor sea-ice-atmosphere processes in Polar Regions and to apply Arctic science and research to the collective understanding of the circumpolar Arctic.