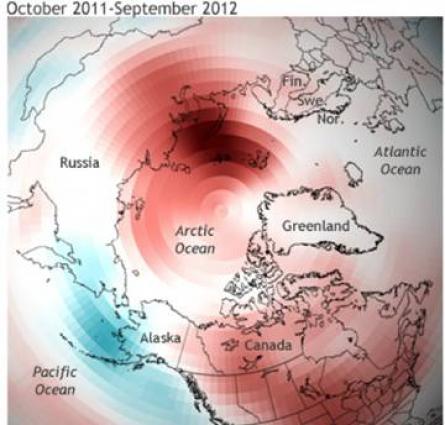 The Arctic Report Card 2012 highlights the dramatic impact of persistent warming in the Arctic, which witnessed numerous record-setting melting events this year.

Changes in the sea ice cover, snow cover, glaciers and Greenland ice sheet are reducing the overall surface reflectivity, with bright, white surfaces that reflect summer sunlight being replaced by darker surfaces, e.g., ocean and land, which absorb sunlight. These conditions increase the capacity to store heat within the Arctic system, which enables more melting - a positive feedback.

“Thus, we arrive at the conclusion that it is very likely that major changes will continue to occur in the Arctic in years to come, particularly in the face of projections that indicate continued global warming,” it said.

A second key point in Report Card 2012 is that changes in the Arctic marine environment are affecting the foundation of the food web in both the terrestrial and marine ecosystems.

Highlights of the Report Card include:

• Longest observed duration of melting on the Greenland ice sheet, with a rare, nearly ice sheet-wide melt event in July.