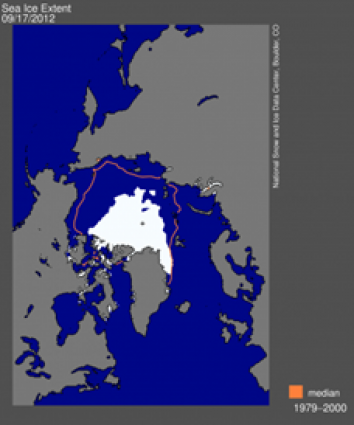 On September 16, Arctic sea ice appeared to have reached its minimum extent for the year of 3.41 million square kilometers (1.32 million square miles), according to a preliminary assessment from the U.S. National Snow and Ice Data Center. This is the lowest seasonal minimum extent since satellite records began in 1979 and is the result of persistent warming in the Arctic. The sea ice extent will now begin its seasonal increase through autumn and winter.

The data is provisional. Estimates and trends identified by other national sources are similar to NSIDC. The World Meteorological Organization will consolidate sea ice data from a variety of Members around the globe in compiling its annual Statement on the Status of the Global Climate. >> More