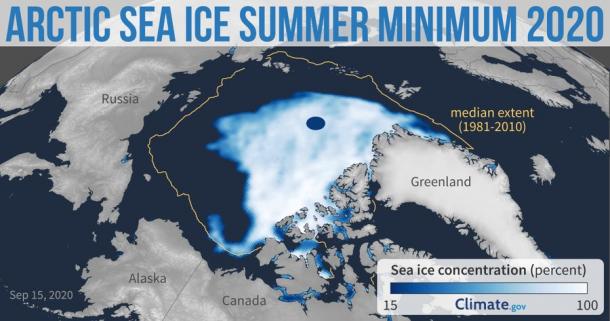 Arctic sea ice – a key climate change indicator - has reached its annual minimum extent after the summer melt season. It was the second lowest extent only after the record low observed in 2012.

The 2020 figure—preliminary because a late-season surge of summer warmth could still drop the extent further—continued an observed trend of long-term Arctic sea ice decline.

There are a number of causes for the massive loss of ice this summer. This includes extremely high air and water temperatures. Accordingly, heat impacted the ice from both above and below, resulting in widespread melting.

A record-breaking heatwave and unprecedented wildfires in Siberia were a major contributing factor during a northern hemisphere summer which will leave a deep wound in the cryosphere, with major impacts on ice shelves and glaciers in the northern hemisphere.

“It's been a crazy year up north, with sea ice at a near-record low, 100-degree (Fahrenheit) heat waves in Siberia, and massive forest fires,” said Mark Serreze, director of NSIDC. “The year 2020 will stand as an exclamation point on the downward trend in Arctic sea ice extent. We are headed towards a seasonally ice-free Arctic Ocean, and this year is another nail in the coffin.” 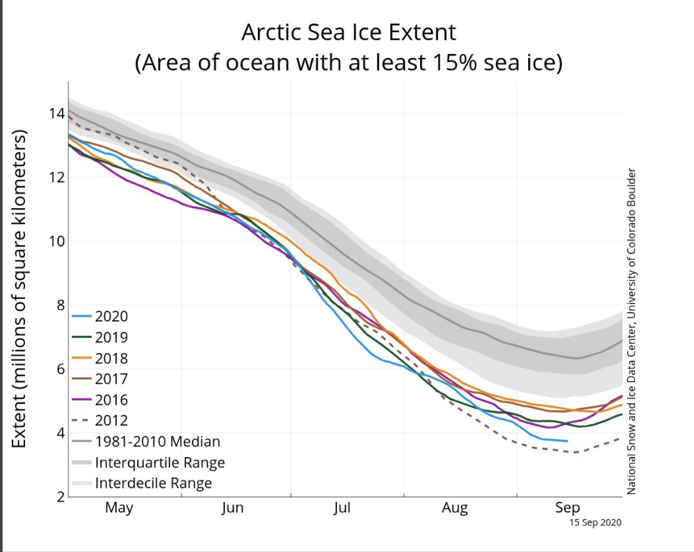 “This threshold means the Arctic is more ocean than ice, a blue highway that’s been open since mid-July and won’t close until well into October,” said Ted Scambos, senior research scientist at the Earth Science Observation Center at the University of Colorado-Boulder.

Temperatures in the Arctic are rising more than twice as fast as the global average. Unique amplification processes and feedbacks, such as the rapid decline of sea ice, significantly contribute to this warming. The consequences of a warming Arctic will be far-reaching across the northern hemisphere.

The fast-warming Arctic has started to transition from a predominantly frozen state into an entirely different climate, according to a comprehensive new study of Arctic conditions by scientists at the National Center for Atmospheric Research (NCAR).

"The rate of change is remarkable," said NCAR scientist Laura Landrum, the lead author of the study published in Nature Climate Change. "It's a period of such rapid change that observations of past weather patterns no longer show what you can expect next year. The Arctic is already entering a completely different climate than just a few decades ago."

In the new study, Landrum and her co-author, NCAR scientist Marika Holland, find that Arctic sea ice has melted so significantly in recent decades that even an unusually cold year will no longer have the amount of summer sea ice that existed as recently as the mid-20th century. Autumn and winter air temperatures will also warm enough to enter a statistically distinct climate by the middle of this century, followed by a seasonal change in precipitation that will result in additional months in which rain will fall instead of snow.

Among long-time observers of Arctic sea ice, the 2020 value was significant in that it not only punctuated a long-term decline, but also because it fell below the 4-million-kilometer (1.5-million-mile) threshold for only the second time in the satellite record—after  2012, when the minimum extent dipped to 3.39 million square kilometers (1.31 million square miles).

The exact time at which the sea ice reaches its absolute minimum depends on the weather conditions in the Arctic, and can only be determined once there is clear evidence that the sea-ice extent has begun to grow again. Based on past experience, this usually comes in mid-September, though sometimes not until the second half of the month.

The sea ice extent is measured by satellite data, including by NASA, the National Snow and Ice Data Center (NSIDC) at the University of Colorado Boulder, AWI, the EUMETSAT OSI SAF, and JAXA-NiPR. Sea-ice extent is defined as the area where ice concentration is at least 15 percent. 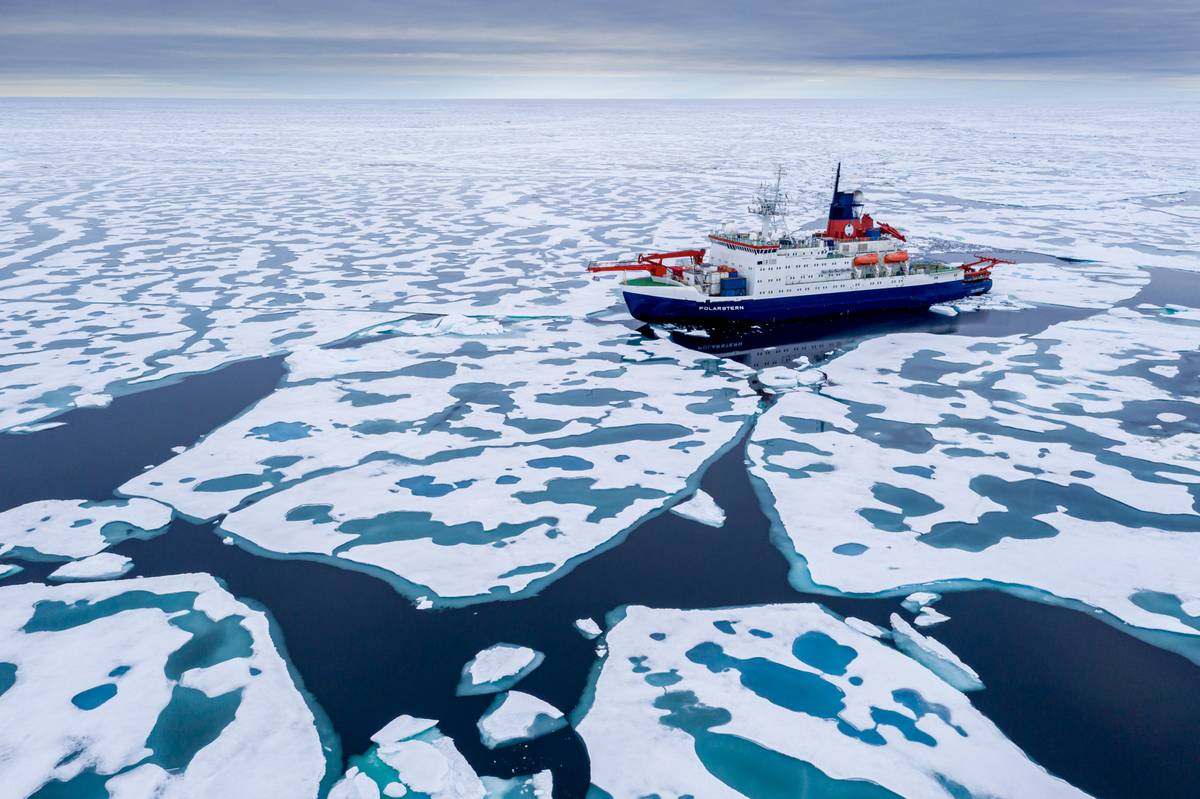 The rapid ice melting was observed in detail by experts on board the German research icebreaker Polarstern, which is the central observatory for the most ambitious Arctic research expedition ever undertaken and involving scientists from 17 nations.

“The scale of Arctic sea-ice retreat this year was breath-taking. Just a short time ago, when we reached the North Pole, we could see broad stretches of open water reaching nearly to the Pole, surrounded by ice that was riddled with holes produced by massive melting. The Arctic ice is disappearing at a dramatic rate. With the MOSAiC expedition, we’re investigating the underlying processes on site, and in more detail than ever before, so that we can accurately represent these rapid changes in the Arctic in our climate models,” says Expedition Leader Prof Markus Rex.

Polar Stern crossed in the geographic North Pole on 19 August, passing through the Fram Strait on the North-east side of Greenland in a region that used to be home to thick multi-year ice.