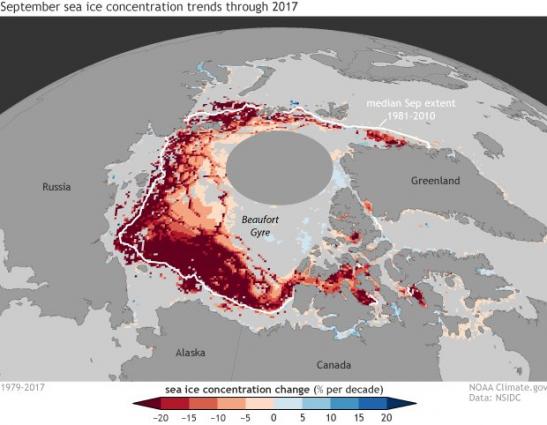 Arctic sea ice has probably reached its annual minimum for 2018, according to the National Snow and Ice Data Center (NSIDC). Sea ice extent dipped to 1.77 million square miles (4.59 million square kilometers) on September 19, and again on September 23. After that, ice extent began to rise, signalling an end to the summer melt season.

The 12 lowest Arctic sea ice minimums have all occurred in the last 12 years.

Warm water from the North Pacific enters the Arctic Ocean through the Bering Strait, and in recent decades, this warm water has exerted an increasing influence on Arctic Sea ice. Decades ago, the Beaufort Gyre north of the Alaskan and Siberian coasts served as a sea ice nursery. Ice could remain in that gyre for years, thickening over time, but by the late 1990s, ice had begun to diminish in the southern arm of the gyre. Multi-year started to melt or be transported out of the Arctic, leading to younger, thinner ice more prone to melt. First-year ice that has not survived a single melt season now dominates the Arctic.

Sea ice extent in the Arctic is declining in all months, but the decline is largest in September, which is historically the end of the summer melt season. But these sharp declines in summertime ice extent are beginning to extend into the fall freeze-up. In November 2017, sea ice scientists noted a dearth of sea ice in the Chukchi Sea, as well as the Bering Sea to the south.

Such a widespread absence of sea ice has implications for indigenous hunters who rely on animals that depend on sea ice, and sea ice loss combined with permafrost thaw contributes to coastal erosion. When sea ice is slow to re-form in the fall, Arctic coastal communities are especially vulnerable to battering waves and flooding that accompany winter storms.