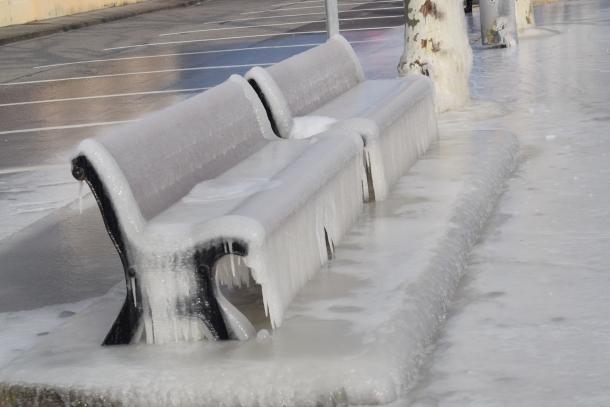 The end of the Northern hemisphere winter has been marked by extreme weather conditions, with exceptionally high temperatures in the Arctic, an extended cold wave and heavy precipitation in Europe and Atlantic storms.

Region-wide advisories and regularly updated severe weather warnings from national meteorological and hydrological services helped authorities prepare for impacts and protect human lives. Despite this, there was widespread transport disruption, strain on energy supplies and dozens of weather-related deaths were reported. 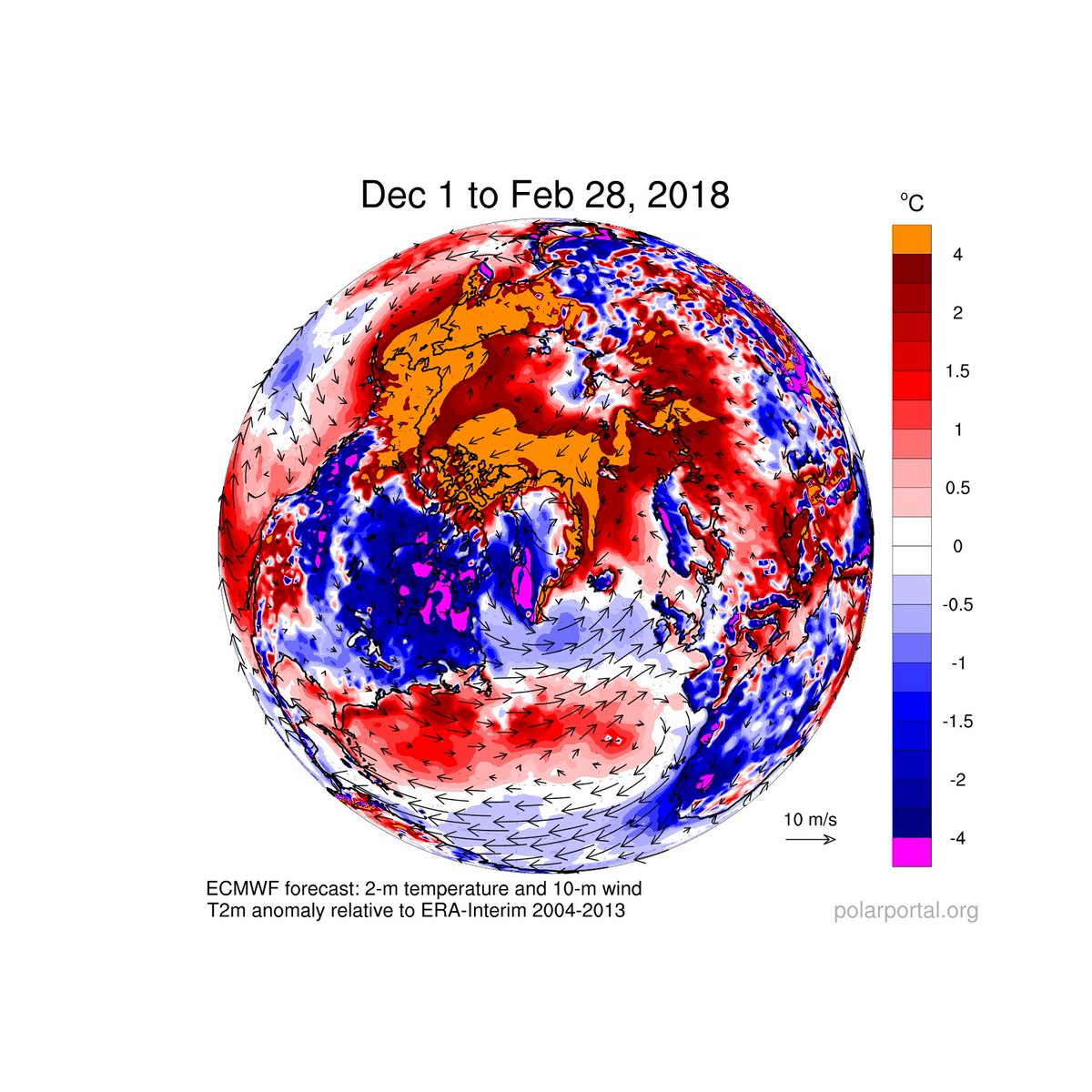 The late cold spell is unusual but not exceptional. In general cold waves are becoming more infrequent as a result of climate change.

The extreme weather was triggered by large scale and interconnected atmospheric circulation patterns and a recent meteorological event called a Sudden Stratospheric Warming Event high up in the Stratosphere, about 30 km over the North Pole. This warming results from a breakdown of the usual westerly winds and often leads to cold easterly winds coming from Siberia which influence temperatures in Europe.

The stratospheric warming event led to a split in the polar vortex, which is an area of low pressure in the upper atmosphere, with swirling westerly jet stream winds circulating around it. Typically, those winds are strong enough to keep the coldest air in the Arctic during the winter. The split allowed the cold air to spill out into the mid-latitudes and for the warmer air to enter the Arctic.

One indication of the strength and position of the jet stream is the inter-connected  North Atlantic Oscillation and Arctic Oscillation. Both are currently negative (meaning that the jet stream is weak). This usually translates into a warm Arctic, cold continent pattern, with cold waves in Europe, as well as episodes of heavy precipitation particularly over southern Europe and the Mediterranean rim countries, and Atlantic storms. WMO documented similar instances in Eurasia in the northern hemisphere winter in 2009/2010 and again in 2011/2012.

“Because of teleconnections, the poles influence weather and climate conditions in lower latitudes where hundreds of millions of people live. Warming Arctic air masses and declining sea ice are believed to affect ocean circulation and the jet stream, and are potentially linked to extreme phenomena such as cold spells in the northern hemisphere,” said WMO Secretary-General Petteri Taalas.

Much of  this winter (1 December to 28 February) was mild in the Arctic, culminating in extraordinary warmth in February. For the month of February, most of the inner Arctic was more than 5°C warmerthan the 2004-2013 average. Several regions were more than 10°C warmer, according to the Polar Portal, a Danish Arctic research institution.

The unusual warmth coincide with the start of the Year of Polar Prediction’s Arctic Winter special observing period, which aims to increase observations in the Arctic as part of a wider drive to strengthen the knowledge base about polar weather and climate change.

The temperature at Cape Morris Jesup weather station at the very top of Greenland, at one of the closest points of any land mass to the North Pole, rose above the freezing mark on several occasions since Feb. 16. The Danish Meteorological Institute (DMI) has only twice previously measured similar high temperatures. The first time was in 2011 and the second time was in 2017.  The reason for the exceptionally high temperature is probably the combination of relative hot air in the Arctic and the warming foehn wind around Cape Morris Jesup, according to DMI. 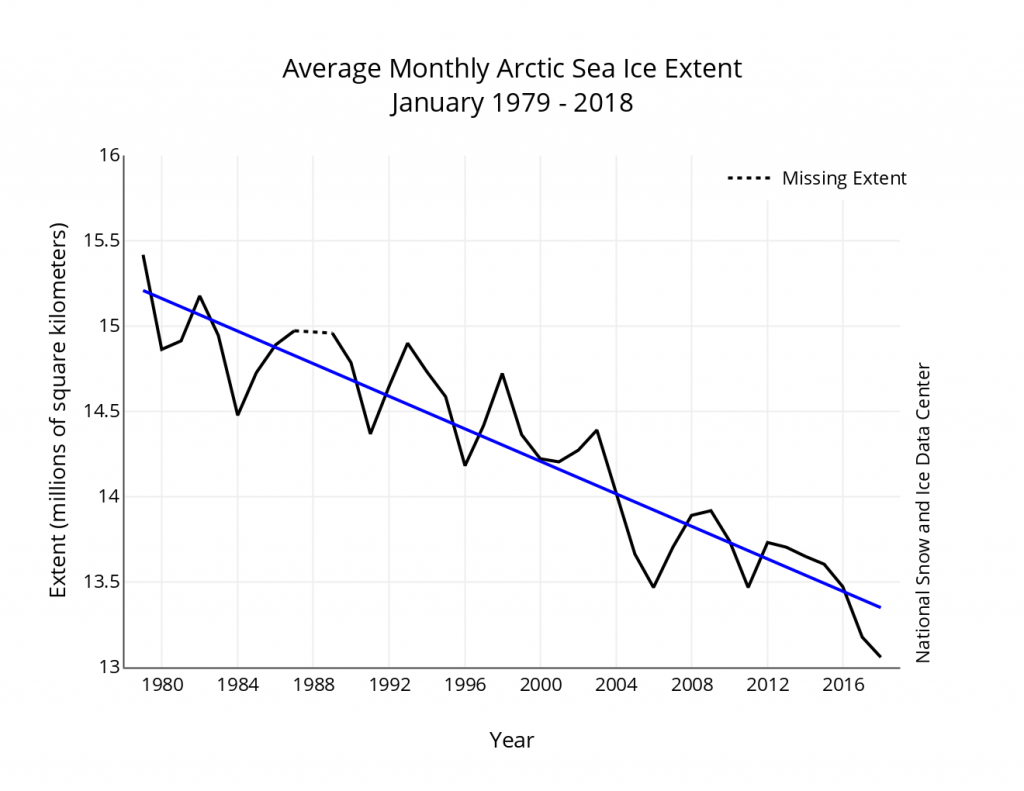 Records have been kept at the weather station since 1980 and show that the average temperature is minus 32.9 ° C in February.  The heat, accompanied by moist air, is entering the Arctic not only through the sector of the North Atlantic Ocean that lies between Greenland and Europe, as it has done in previous years, but is also coming from the North Pacific through the Bering Strait.

The high temperatures in the Arctic are of particular concern because Arctic sea ice extent in January was the lowest on record and there are fears that the sea ice minimum in March (after the Arctic winter) may again be a new low. The US National Snow and Ice Data Center said that for the month of January, air temperatures at the 925 hPa level remained unusually high over the Arctic. Nearly all of the region was at least 3°C or more above average. The largest departures from average of more than 9°C were over the Kara and Barents Seas, centered near Svalbard. On the Pacific side, temperatures were above 5°C above average. 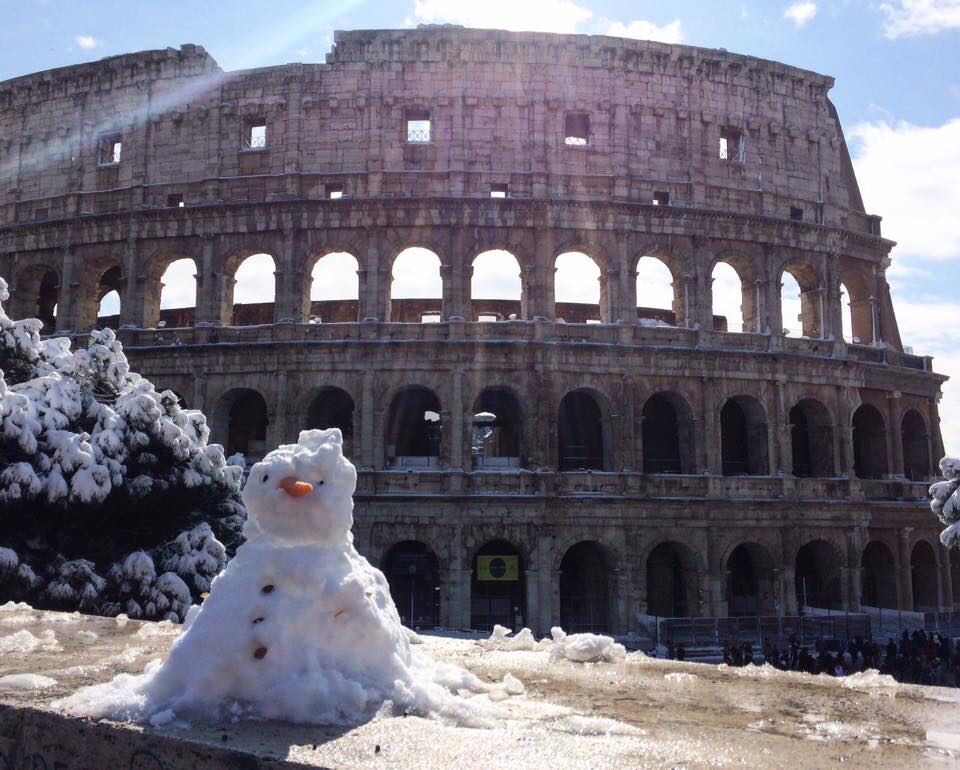 In the final week of February, many countries in Europe issued severe weather alerts and warnings for cold, ice and snow, causing transport and energy disruption, and a health risk to vulnerable groups. The wind chill factor meant that temperatures felt even colder than recorded.

The Met Office in the United Kingdom forecast bitter cold and widespread snow at times for many areas this week. The UK officially broke its record for the lowest maximum temperature for March in a 24 hour period. Tredegar in south Wales was below -4.7 °C all day

MeteoFrance reported temperatures of more than -10°C below the long term average in southern and eastern France, with heavy snowfall in Corsica. Germany’s weather service, Deutscher Wetterdienst said that temperatures fell to -30°C on the Zugspitze mountain in the south of the country on 28 February.

In Hungary, the lowest minimum daily temperature record was broken, with a recording of -24.6°C  in the Carphathian Basin on 28 February. Serbia had a top-level red alert for cold temperatures for several days.

As warm air masses from the south collided with the cold air, heavy precipitation fell in southern European countries. The Colosseum in Rome was covered with snow and the beaches in Naples were also white with snow, as was Mount Vesuvius.  Hailstorms hit the Arabian Gulf, including Oman and Saudi Arabia, and Morocco experienced high winds and heavy rains.

The Portuguese meteorological service, IPMA, and Spain’s AEMET issued warnings on 27 February for winter storm Emma, which swept in from the Atlantic with high winds and heavy precipitation.

This brought heavy snow, blizzards and freezing rain to the Republic of Ireland and southern UK on 1 and 2 March. A top-level red-alert for potentially life-threatening hazards was issued by MetEireann and the Met Office. There was serious transport disruption, including delays and cancellations on air and rail services and the closure of Dublin airport.

The US National Weather Service issued warnings of a powerful storm system affecting the northern Mid-Atlanic and into the Northeast, with multiple hazards starting 2 March.

Ahead of the cold wave, the Regional Climate Centre for Climate Monitoring  for WMO’s Regional Association VI (which includes Europe) operated by the Deutscher Wetterdienst issued a Climate Watch Advisory, with effect from 20 February.

"A period with significantly below-normal temperatures (cold spell) at least for this and the next 2-3 weeks is expected for most of Europe (from Spain to Greece and from Ireland to Russia). The coldest days are expected for the week beginning 26 February, with weekly temperature anomalies below -10°C in western European Russia, Belarus, Ukraine and Poland.

Weekly temperature anomalies below -6°C are expected in Central Europe, northern Italy, the Balkans and the Baltic States. The weekly anomalies for southern, western and northern Europe are forecasted with -3°C to -6°C.

Daily minimum temperatures are expected to be below 0°C even in the south. This cold period with surface frost could freeze the developing crops and fruits and could be a risk of life for vulnerable people exposed to the cold."

It issued a separate Climate Watch on 23 February.  "A period with significantly above-normal precipitation for the next two weeks is expected for southern Europe (from Portugal to Turkey) with locally heavy precipitation, wind gusts, flooding and in higher altitudes with snow especially in the Balkans. A further prolongation might be possible afterwards. The probability for this anomaly is estimated to be above 80%, in the first week (26 February - 4 March) above 90%.“

Climate Watch Advisories are not operational forecasts. They are guidance for the National Meteorological and Hydrological Services (NMHS) who are responsible for monitoring the situation and issuing national forecasts and alerts.  Meteorological services in Europe have been active in issuing detailed forecasts – including the wind chill factor – and working with affected sectors such as health, transport and energy to protect the public and limit impacts.