ARGO collects its one millionth observation 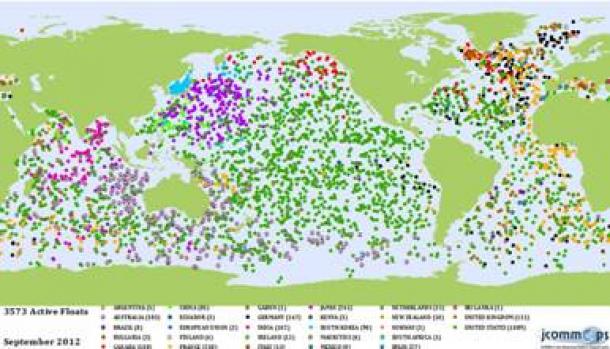 ARGO collects its one millionth observation

Today the mean sea level is rising, Arctic sea ice cover is shrinking and high latitude areas are warming rapidly. These effects are caused by a mixture of long-term climate change and natural variability. An improved understanding of global changes in both the atmosphere and ocean is needed to project regional impacts and guide international actions. Until recently, very little data was available on the ocean, but that has now changed thanks to a programme co-sponsored by WMO and UNESCO’s Intergovernmental
Oceanographic Commission (IOC). press release

In 1999, a small group of oceanographers outlined a plan to set up an array of profiling floats to monitor the state of the upper 2 km of the global ocean. The initial objective was to maintain a network of 3,000 units, in ice-free areas, providing both real-time data and higher quality delayed mode data and analyses to underpin a new generation ocean and climate models. The programme was called Argo.

Argo is now a collaborative effort of over 30 countries and by November 2012, it had collected its millionth profile of temperature and salinity, twice the number obtained by research vessels during all of the 20th century. 120,000 new profiles are collected every year, at the impressive rate of 1 profile approximately every 4 minutes. Each profile consists of up to 1,000 measurements of temperature and salinity at varying depths.

Today Argo, with over 3,500 active floats, provides global-scale, all-weather subsurface observations of the oceans, an unprecedented dataset for researchers studying the temperature, salinity, and circulation of the global oceans and how these change over periods ranging from days to decades. This data is also crucial for weather forecasts.

Argo, a major component of the Global Ocean Observing System, is managed by the WMO and IOC Joint Technical Commission for Oceanography and Marine Meteorology. This is an intergovernmental body of technical experts that provides a mechanism for international coordination of oceanographic and marine meteorological observing, data management
and services, combining the expertise, technologies and capacity building capabilities of the meteorological and oceanographic communities.

The 1 millionth observation is a symbolic milestone for Argo as we seek to increase our understanding of the oceans and their role in earth's climate.