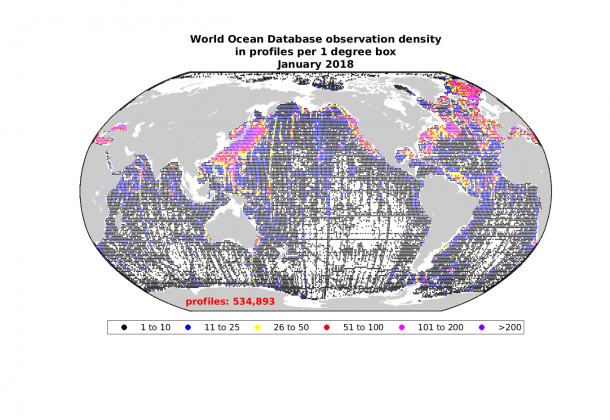 An international effort delivering an unsurpassed look at changes occurring in the ocean worldwide has achieved a major milestone as it marks its 20th anniversary. The Argo programme, which incorporates about 4,000 floats worldwide, delivered its two millionth profile of physical data from the from the upper 2 kilometers of the worlds oceans.

The Argo project has revolutionized physical oceanography and climate science, providing a unique snapshot of our changing oceans and now stands on the cusp of a major expansion into new dimensions of the ocean.

Argo floats are cylindrical free-floating devices that stand about 150 cms high and operate for up to five years on battery power. Once deployed, the floats dive 1,000 meters deep, drift with the ocean currents for several days, then sink an additional 1,000 meters before slowly rising to the surface while collecting temperature and salinity data. This vertical series of measurements is known as a “profile”. At the sea surface, they transmit the data via satellite before diving down again.

Just has the atmosphere has weather balloons, Argo provides the ocean’s robotic profilers. Since the first float was deployed in 1999, the Argo Program has produced nearly four times as many profiles as every other ocean observing tool combined.

A recent report published in Science said research indicated that the world's oceans are warming faster than previous estimates by the Intergovernmental Panel on Climate Change.

"The relatively short period after the deployment of the Argo network (see the photo) in the early 2000s has resulted in superior observational coverage and reduced uncertainties compared to earlier times,"  said the report by US and Chinese scientists.

Multiple lines of evidence from four independent groups thus now suggest a stronger observed OHC warming. Although climate model results (see the supplementary materials) have been criticized during debates about a “hiatus” or “slowdown” of global mean surface temperature, it is increasingly clear that the pause in surface warming was at least in part due to the redistribution of heat within the climate system from Earth surface into the ocean interiors, it said.

As the radiative forcing of the Earth system has increased over time, so has the rate of ocean heating. As more of the warming signal propagates into the deeper ocean over time, the maintenance of Argo and development of a deep array (below 2000m) will be vital to  the ongoing monitoring of anthropogenic climate change.

“While Argo is global and relatively uniform spatially, it complements satellite and other sources of in situ observations. It provides data from very remote ocean regions where in situ oceanographic marine meteorological observations from other means (e.g.voluntary observing ships and data buoys) are sparse,” says Etienne Charpentier, Chief of WMO Observing Systems Division.

“Temperature and salinity data from the global Argo array is helping scientists understand oceanic and conditions, interactions between the ocean and the atmosphere, as well as long-term climate trends. Argo data are routinely assimilated in numerical ocean prediction models, some of which are now coupled with atmospheric models, helping to improve medium range weather forecasts as well as sub-seasonal to longer prediction. Argo also supports operational forecasts for predicting tropical cyclone paths and to support maritime route planning,” he says.

Argo is one of the central elements of the Global Ocean Observing System, which is co-sponsored by the Intergovernmental Oceanographic Commission (IOC) of UNESCO and by WMO. Argo is monitored by the IOC-WMO Joint Technical Commission for Oceanography and Marine Meteorology Observations Programme Support Centre (JCOMMOPS).

“Argo floats have been out there for nearly two decades, quietly exploring our oceans’ changing temperature and salinity patterns,” said Susan Wijffels, Senior Scientist at the Woods Hole Oceanographic Institution is the co-chair of the International Argo Programme. “They are our ‘silent sentinels’ – letting us peer into the mysteries of our remote and hostile deep oceans, which are so important to our daily lives.” 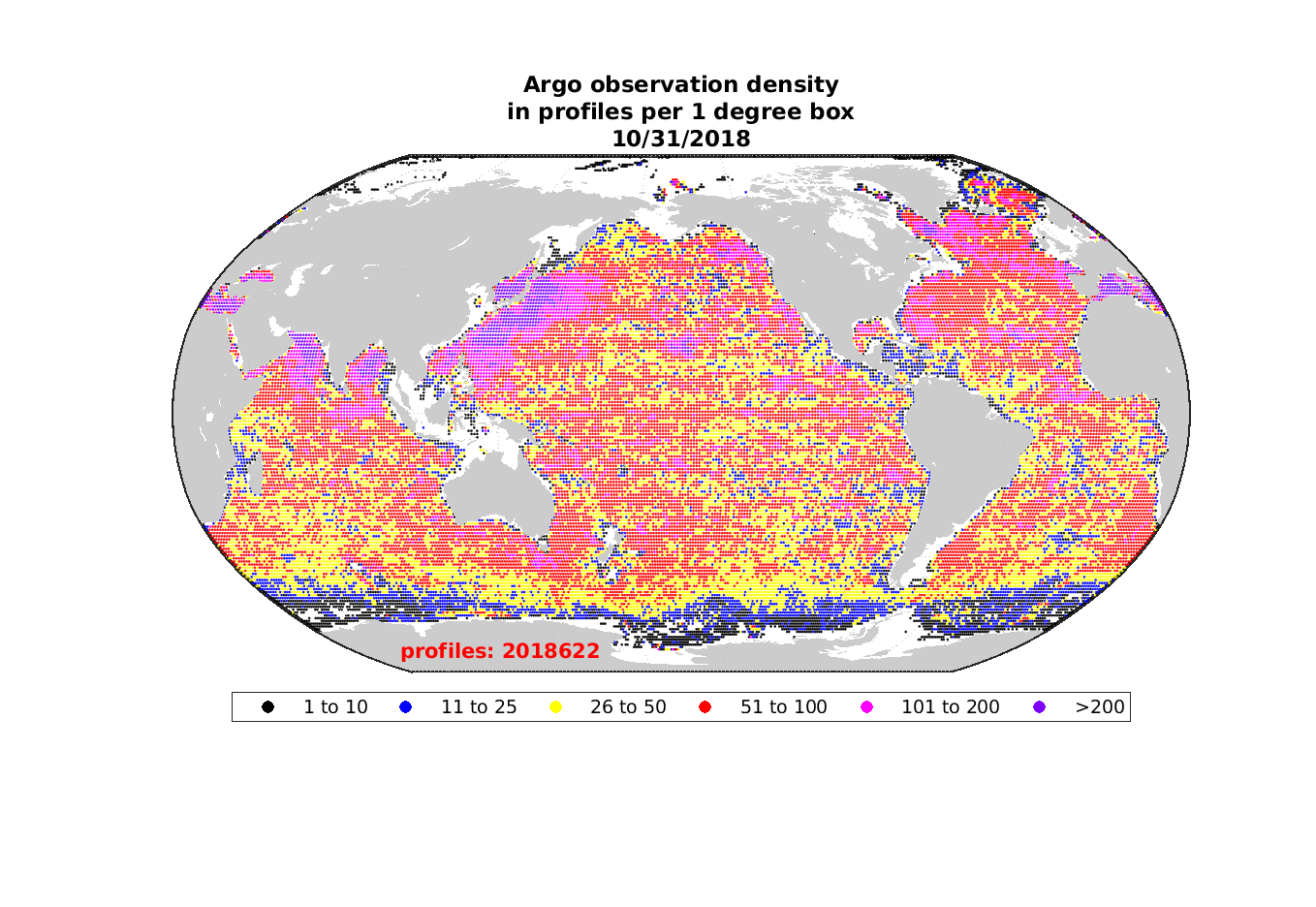 Two decades of Argo salinity data reveal that the wet (high rainfall) regions of the world are becoming wetter and the dry regions drier. The warming of subsurface layers of the ocean causes expansion of the water column that accounts for about one-third of global sea level rise.

The oceans cover 71 percent of the Earth’s surface. They influence our weather and climate and store more than 90 percent of excess heat trapped by greenhouse gases, thus shielding us from even higher temperatures and acting as a buffer against climate change.

Argo exemplifies international collaboration on a scale rarely seen in the scientific community, with around 800 Argo floats deployed each year by 26 countries. Many other nations contribute logistical support and ship access.

Large-scale projects are underway to test floats that can descend to a depth of 6,000 meters, to add sensors that measure biogeochemical (BCG) variables like oxygen, pH, and nitrate, and to expand further into seasonally ice-covered seas. Ocean acidification, deoxygenation, and ecosystem health will come into Argo’s gaze through BGC Argo. This will dramatically improve the number observations taken by research vessels.

“Argo is entering in a new era that will need an increased financial and political support from the international community. The 2020 vision for a global full-depth and multidisciplinary array will enable a new range of forecasting capabilities, fundamental ocean research, climate assessments, and blue economy benefits. To implement that vision, national Argo budget will have to triple and, deployments into Member States Exclusive Economic Zones be facilitated”, says Mathieu Belbéoch from JCOMMOPS.

For more information on the Argo program see: http://www.argo.ucsd.edu/About_Argo.html,http://www.jcommops.org/board?t=Argo and Argo Story map