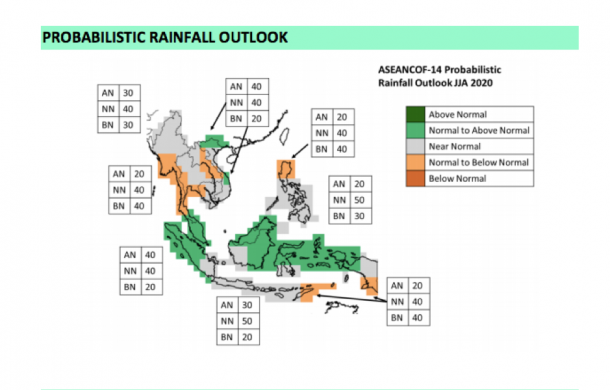 The ASEAN Climate Outlook Forum has issued its seasonal forecast for the summer monsoon season, June-July-August 2020 over Southeast Asia, taking into account the possible influence of the El Niño Southern Oscillation (ENSO) and the Indian Ocean Dipole (IOD) on the climate system over  the region.

For the upcoming Northern Hemisphere summer season (June-July-August), normal- to above-normal rainfall is expected over much of the equatorial region (Brunei, Malaysia, Singapore, and northern parts of Indonesia) as well as northern Viet Nam and coastal central Viet Nam.

ASEANCOF virtual session was organised by Meteorological Service Singapore as host of the ASEAN Specialised Meteorological Centre and coordinator of Southeast Asia RCC Network. The virtual session was attended by representatives of NMHSs of all ASEAN member countries  and included  online discussions on the current state of the climate and its possible evolution based on the results of questionnaires distributed to participants prior to the virtual meeting. The participants also discussed a possibility of the objective seasonal forecasting methodology to be integrated into ASEANCOF operational practice.