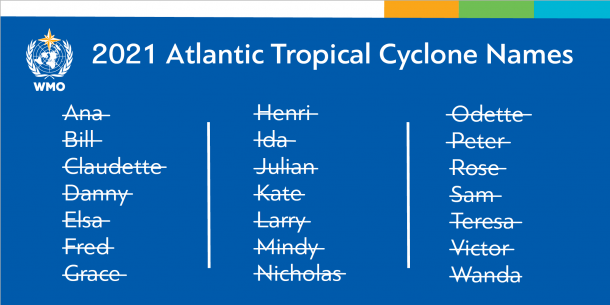 The Atlantic hurricane season 2021 has been so active that it has exhausted the regular list of storm names for the second consecutive year. WMO will now use a new list of supplemental names for any forthcoming tropical cyclones in the basin.

Tropical Storm Wanda, which is tracking in the central North Atlantic,  is the last-named storm on the regular 2021 list. If another named system forms, it will be called Adria.

WMO maintains rotating lists of names in alphabetical order for tropical cyclones to alert the public of potential hazards. Male and female names are alternated, and the lists are used every six years. If a hurricane is particularly devastating or deadly, its name is retired and a new one selected. 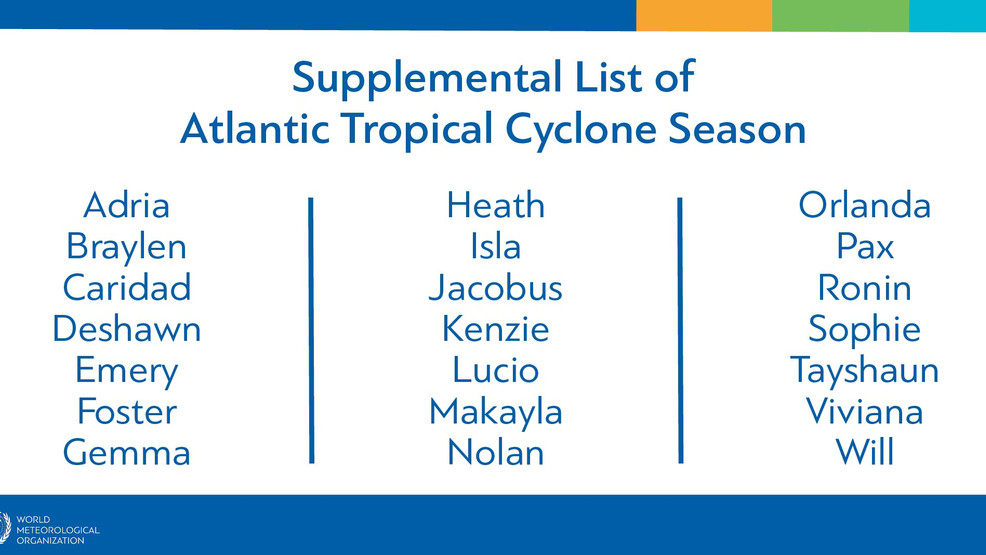 WMO’s Hurricane Committee (Regional Association IV - North Atlantic, Central America and Caribbean) decided in March to use a new supplemental list of names rather than the Greek alphabet. The Greek alphabet was used for only the second time on record in 2020, but it created a distraction from the communication of hazard and storm warnings and was potentially confusing.

The 2021 Atlantic hurricane season has so far been less devastating than 2020 but it has proved to be unusually active in terms of Accumulated Cyclone Energy (ACE) and the number of storms. Two Atlantic seasons on record have had more than 21 named storms: 2005 (28 named storms) and 2020 (30 named storms).

Even in the event of an active season, impacts are limited if major hurricanes remain at sea. And even with a quiet season in terms of ACE, a single landfalling hurricane can be very costly and devastating. Even systems with “only” the intensity of tropical storms can produce torrential rain and flooding when they make landfall.

For the first time since 1977, there were no major (Category 3 and above) tropical cyclones during October.

Hurricane Ida stands out as the season’s deadliest and most damaging storm. At its peak, Ida was category 4 on the Saffir Simpson scale. Ida tracked through the Caribbean, leaving a trail of destruction in Cuba and other islands. It made landfall near the city of New Orleans on 30 August, on the 16th anniversary of Hurricane Katrina and caused widespread infrastructure damage and power outages in the US State of Louisiana.

Ida transitioned to a post-tropical cyclone as it moved through the northeastern USA, breaking multiple rainfall records, causing disruption to transport systems and triggering deadly flash-flooding which caused dozens of casualties. The US National Hurricane Centre and National Weather Service issued multiple advisories and warnings.

The above active hurricane season was correctly predicted by the US National Oceanic and Atmospheric Administration.

This is due to a mix of competing oceanic and atmospheric conditions. Warm Atlantic sea surface temperatures, reduced vertical wind shear and an enhanced west Africa monsoon are all contributing factors. These conditions are set against the backdrop of the ongoing warm phase of the Atlantic Multi-Decadal Oscillation, which has been favouring more active hurricane seasons since 1995, according to NOAA.

A potential return of La Niña can also play a role and impact the remaining Atlantic hurricane season by helping make atmospheric conditions more conducive for tropical storms and hurricanes to form in the Atlantic Ocean.