Australia hit by heat and fires 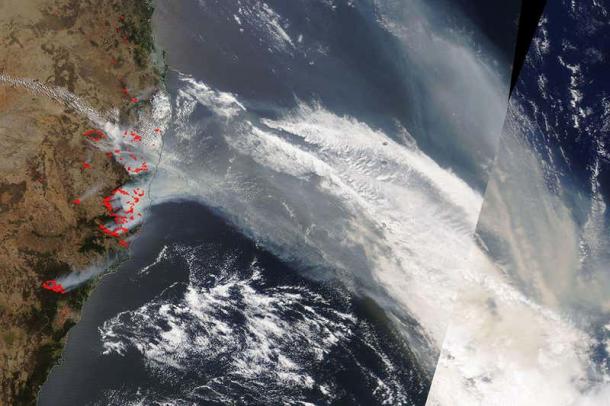 Australia hit by heat and fires

Dozens of bushfires are burning in Australia, feeding off high temperatures and winds and low humidity and soil moisture.

The extensive and intense fires have caused casualties, devastated homes and ecosystems and caused air quality problems. High levels of smoke pollution continues to travel thousands of kilometres, with plumes of smoke reaching across the Pacific and all the way to South America, according to satellite imagery.

“Catastrophic” fire conditions were observed in numerous places in South Australia on 20 November and numerous November temperature records tumbled, according to Australia’s Bureau of Meteorology.

Its 21 November forecast warned that hot dry and gusty weather will lead to elevated fire dangers through South Australia, Victoria and New South Wales and Tasmania. A Code Red alert was issued for parts of Victoria where catastrophic fire dangers are forecast.

For New South Wales, the epicentre of the mid-November  bushfires, the danger will be heightened by the risk of thunderstorms which may ignite new fires and gusts, according to the Bureau of Meteorology.

The city of Sydney was once again blanketed in smoke on 21 November.

The current fires are due to a combination of factors, including low soil moisture, heat and, importantly, wind direction and wind speed.

Australia’s October to April outlook said that there may be fewer tropical cyclones but more heat and fire risk in the coming months.

When compared to other 34-month periods commencing in January, the 34 months from January 2017 to October 2019 has been the driest on record averaged over the Murray–Darling Basin (36% below the 1961–1990 average), as well as over the northern Murray–Darling Basin (40% below average) and for the state of New South Wales (35% below average). All three regions have also been the driest on record for the 22 months from January 2018 to October 2019, whilst for the 27 months from August 2017 to October 2019 rank second in all three regions; only the 1900–02 peak of the Federation Drought has been drier.

The dry conditions of the last three years have been particularly acute during the cool season, which is important in many regions for generating runoff. Rainfall for the period from April to September was less than 50% of average in all three years in 12 of the 30 rainfall districts of New South Wales. The very much below average October rainfall over most of New South Wales and the Murray–Darling Basin as a whole has further exacerbated the effect of low inflows to date.

The incidence of wildfires is greatly influenced by natural variability in our climate, including precipitation and wind, as well as other factors not related to the climate (eg land and forest management, building practices). 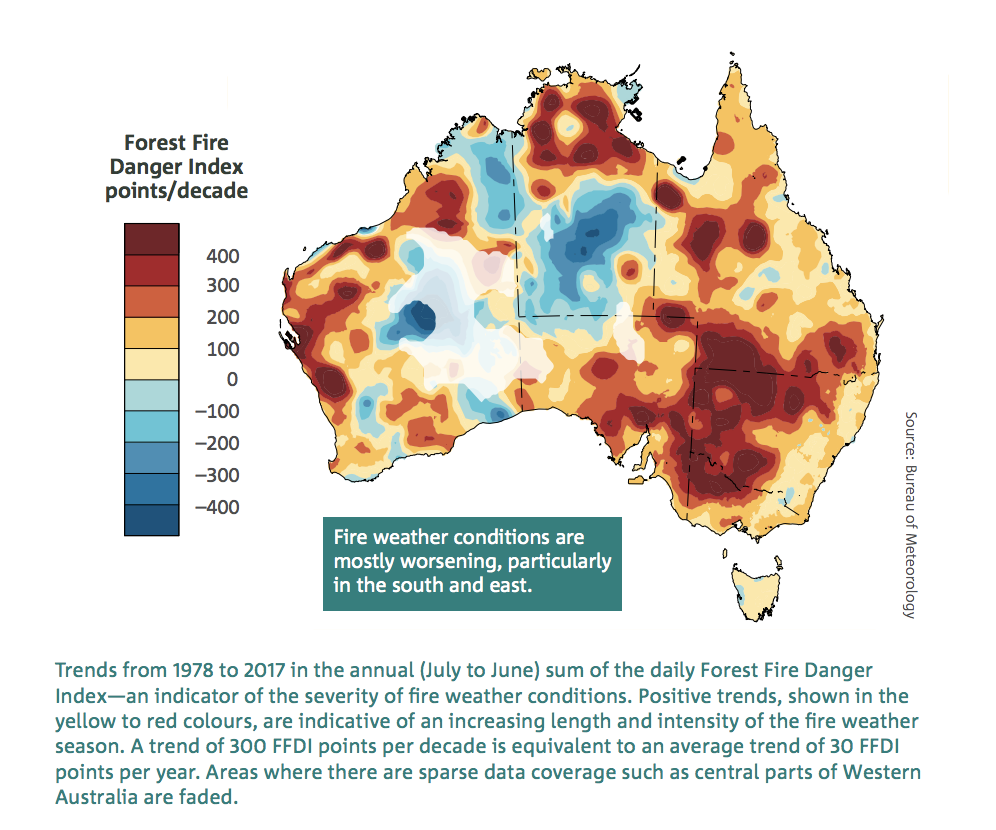 Australia’s state of the climate report 2018, issued earlier this year said that there has been a “long-term increase in extreme fire weather, and in the length of the fire season, across large parts of Australia.” Climate change, including increasing temperatures, is contributing to these changes,” said the report by CSIRO and the Australian Bureau of Meteorology.

Fire weather is largely monitored in Australia using the Forest Fire Danger Index (FFDI). This index estimates the fire danger on a given day based on observations of temperature, rainfall, humidity and wind speed. The most extreme 10 per cent of fire weather days) has increased in recent decades across many regions of Australia, especially in southern and eastern Australia. There has been an associated increase in the length of the fire weather season. Climate change, including increasing temperatures, is contributing to these changes.

Australia’s climate has warmed by just over 1 °C since 1910, leading to an increase in the frequency of extreme heat events.

There has been a decline of around 11 per cent in April–October rainfall in the southeast of Australia since the late 1990s.

Australia is projected to experience: