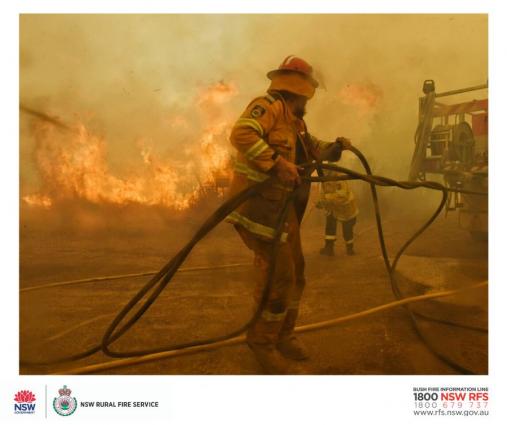 Catastrophic and unprecedented bushfires in Australia have killed more than 28 people, destroyed hundreds of homes and burned hundreds of thousands of hectares of land, causing massive devastation to wildlife, ecosystems and the environment. The fires come after Australia's hottest, driest year on record. They have led to hazardous air quality in major cities throughout Australia, impacted New Zealand and sent smoke drifting thousands of kilometres across the Pacific to South America.

The fires have led to hazardous air quality in major cities throughout Australia, impacted New Zealand and sent smoke drifting thousands of kilometres across the Pacific to South America. 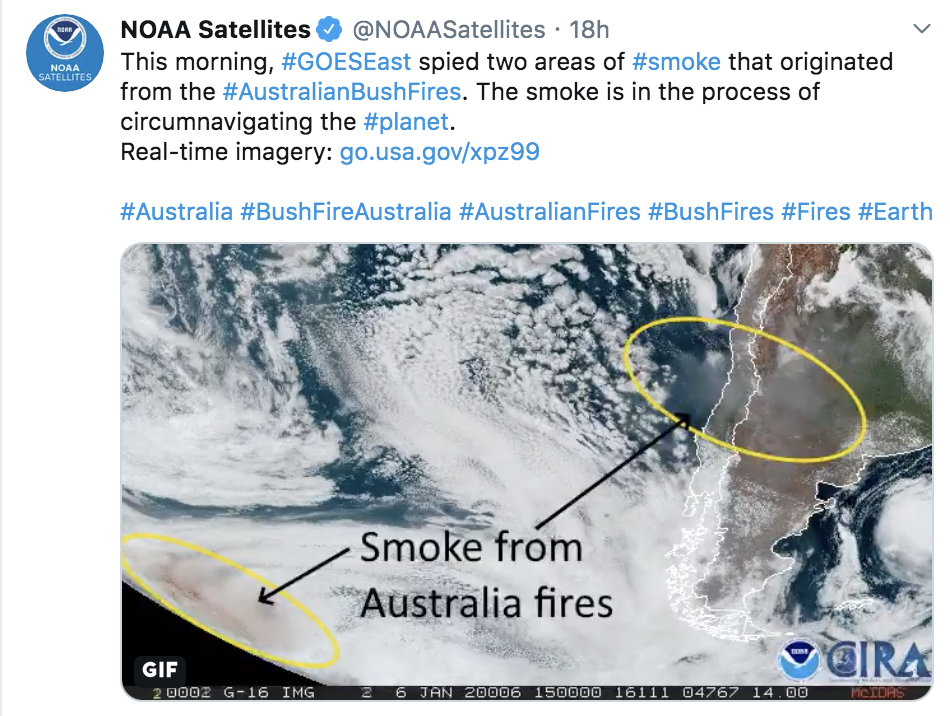 The long range transport of smoke reached both Argentina and Chile on 6 January, according to the national meteorological and hydrological services.

Wildfires release harmful pollutants including particulate matter and toxic gases such as carbon monoxide, nitrogen oxides, and non-methane organic compounds into the atmosphere. The fires have already released approximately 400 megatonnes of carbon dioxide into the atmosphere, according to the European Union's Copernicus Atmospheric Monitoring Service (CAMS). On 2 January CAMS saw that the highest concentrations of atmospheric carbon monoxide in the world were over the ‘clean’ South Pacific Ocean, having come from fires in New South Wales. Taking Australia as a whole, carbon dioxide emission hasn’t been particularly high this wildfire season, but emissions from New South Wales are many times higher than the 2003–2018 average.

In the first week of 2020, many parts of southern and eastern Australia, including the states of New South Wales and Victoria, saw catastrophic or extremely dangerous fire conditions, due to a combination of temperatures well above 40°C, prolonged lack of rain and gusty winds.   The Australian military was called in to help battle the blazes, with naval vessels evacuating residents trapped in a coastal town in the State of Victoria.

Across Australia as a whole, spring 2019 (September to December) saw the highest fire weather danger as measured by the Forest Fire Danger Index (FFDI)1, with record high values observed in areas of all States and Territories, according to Australia’s Bureau of Meteorology. More than 95% of Australia by area had spring accumulated FFDI values that were very much above average, including almost 60% of the country that was highest on record for spring

The year 2019 was unusually warm and dry for large parts of Australia, with many records set, setting the scene for a “long and challenging fire season,” according to the Australian Seasonal Bushfire Outlook December 2019 for summer 2019/2020,

“The tendency for fire seasons to become more intense and fire danger to occur earlier in the season is a clear trend in Australia’s climate, reflecting reduced and/or less reliable cool season rainfall and rising temperatures. Fire season severity is increasing across much of Australia as measured by annual (July to June) indices of the FFDI, with the increases tending to be greatest in inland eastern Australia and coastal Western Australia,” it said.

The bushfire outlook is compiled by Federal government agencies, including the Bureau of Meteorology and the Bushfire and Natural Hazard Cooperative Research Centre. 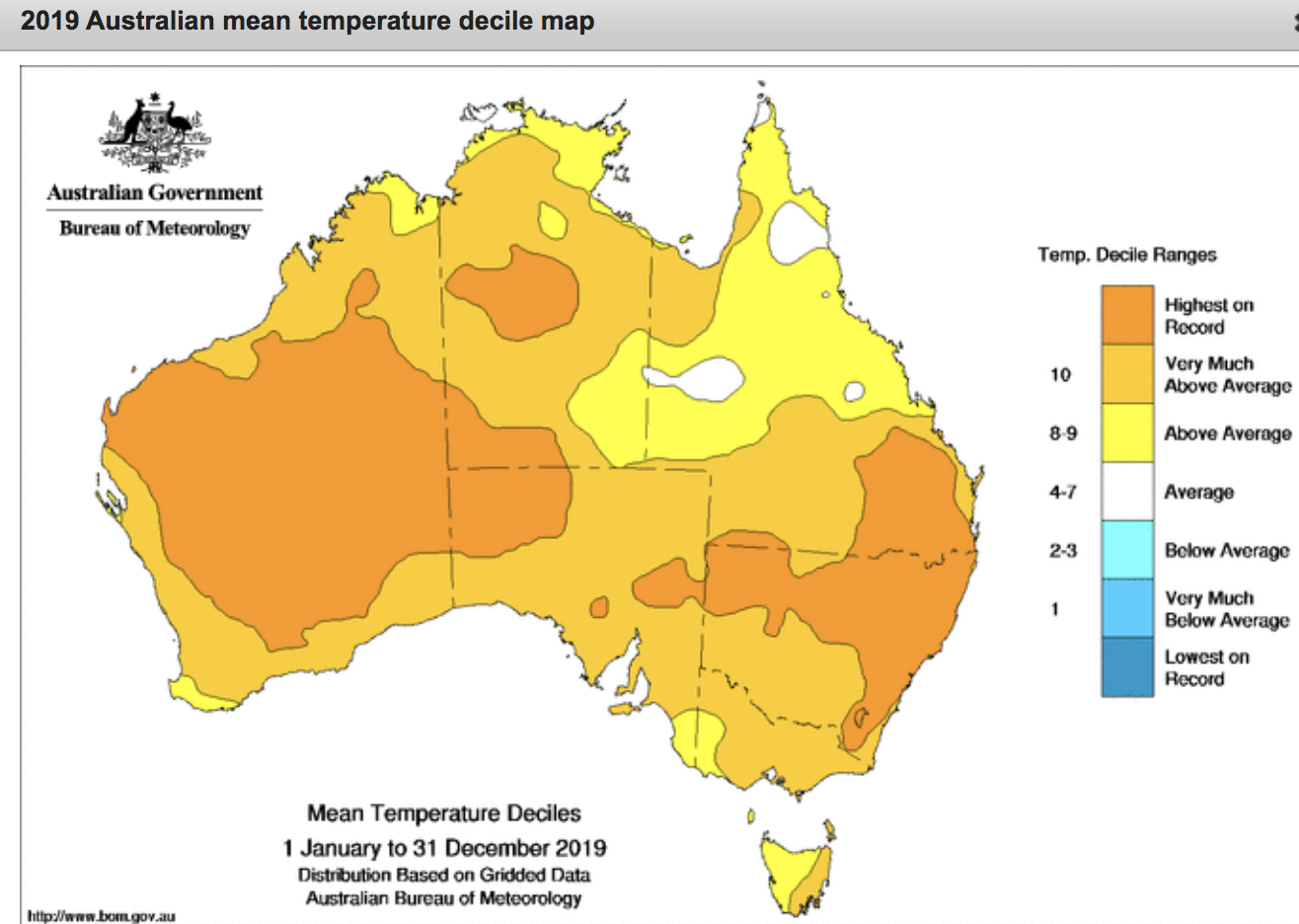 The mean temperature for the 10 years from 2010 to 2019 was the highest on record, at 0.86 °C above average, and 0.31 °C warmer than the 10 years 2000–2009. All the years since 2013 have been amongst the ten warmest on record for Australia. Of the ten warmest years, only one (1998) occurred before 2005. Warming associated with anthropogenic climate change has seen Australian annual mean temperatures increase by over one degree since 1910. Most of this warming has occurred since 1950.

Australia recorded its hottest day on record on 19 December, with an average maximum temperature of 41.9°C. In South Australia, a temperature of 49.9°C was recorded at Nullarbor, 49.8 at Eucla and 49.5 at Forrest.

2019 was also the driest year on record for Australia at 277.6 mm, well below the previous record in 1902 (previous lowest was 314.5 mm). Nationally-averaged rainfall for 2019 was 40% below the 1961–1990 average of 465.2 mm. The national rainfall dataset commences in 1900. Although every period of rainfall deficiency is different, the extraordinarily 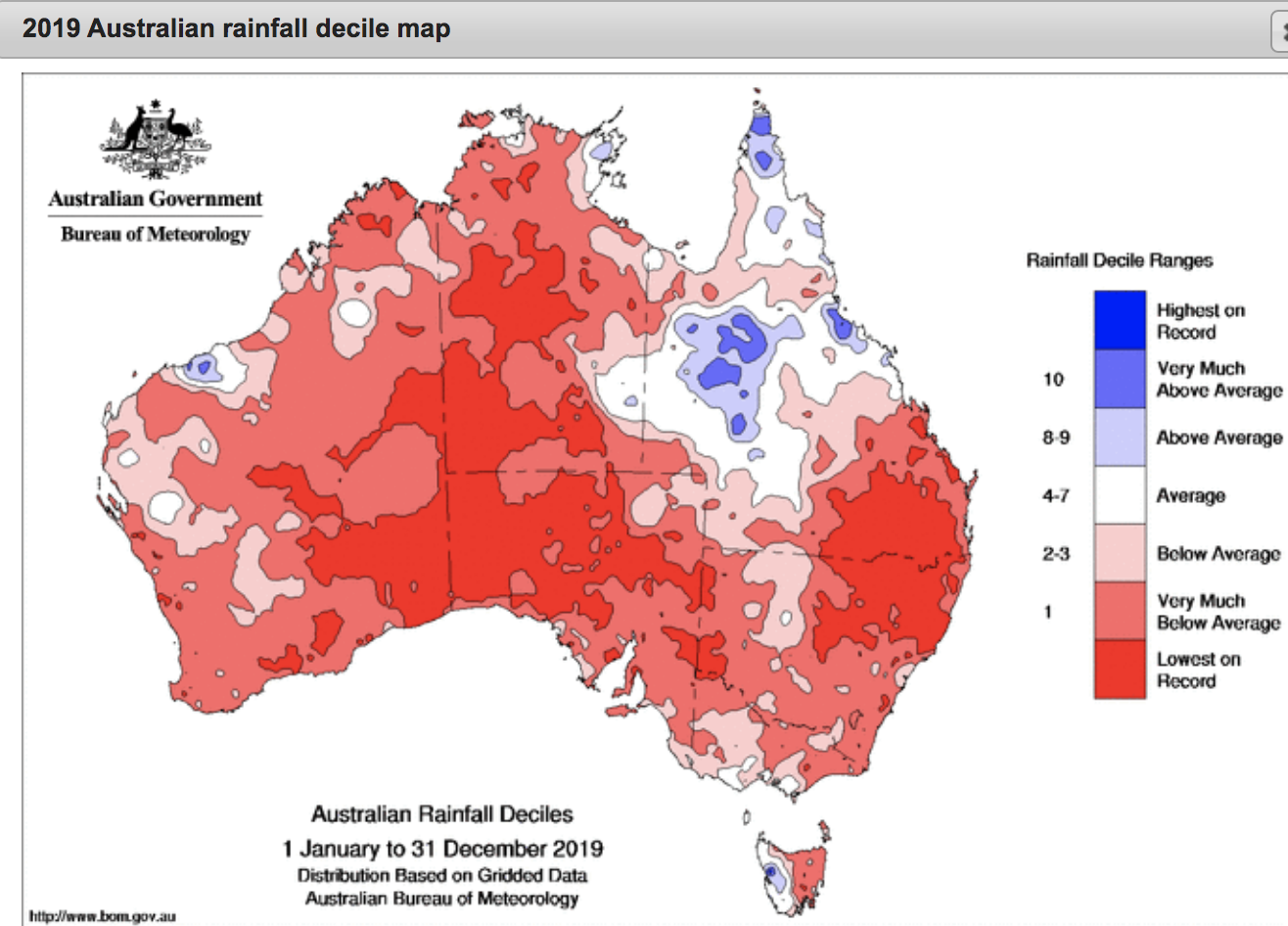 low rainfall experienced this year has been comparable to that seen in the driest periods in Australia's recorded history, including the Federation Drought (start of 20th century) and the Millenium Drought (start of 21st century).

The dry conditions of the last three years have been particularly acute during the cool season, which is important in many regions for generating runoff. Rainfall for the period from April to September was less than 50% of average in all three years in 12 of the 30 rainfall districts of New South Wales. The very much below average October rainfall over most of New South Wales and the Murray–Darling Basin as a whole has further exacerbated the effect of low inflows to date. 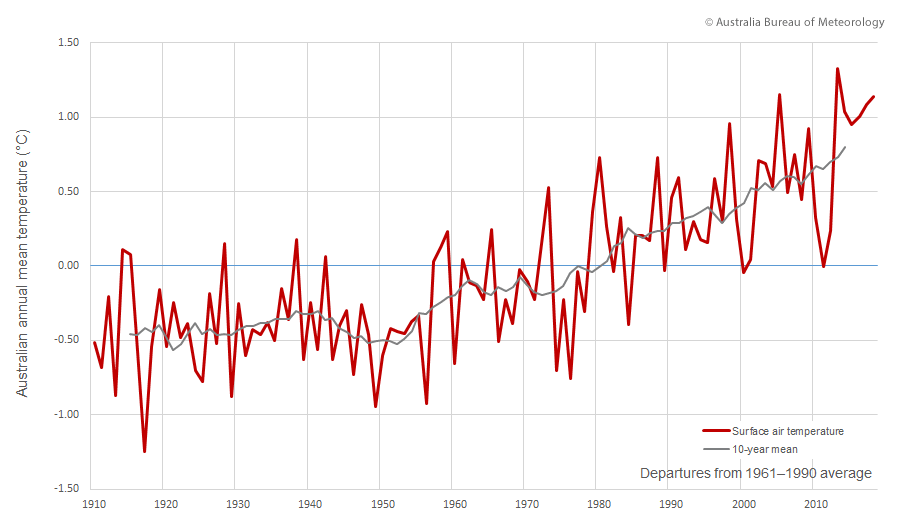 The incidence of wildfires is greatly influenced by natural variability in our climate, including precipitation and wind, as well as other factors not related to the climate (eg land and forest management, building practices). 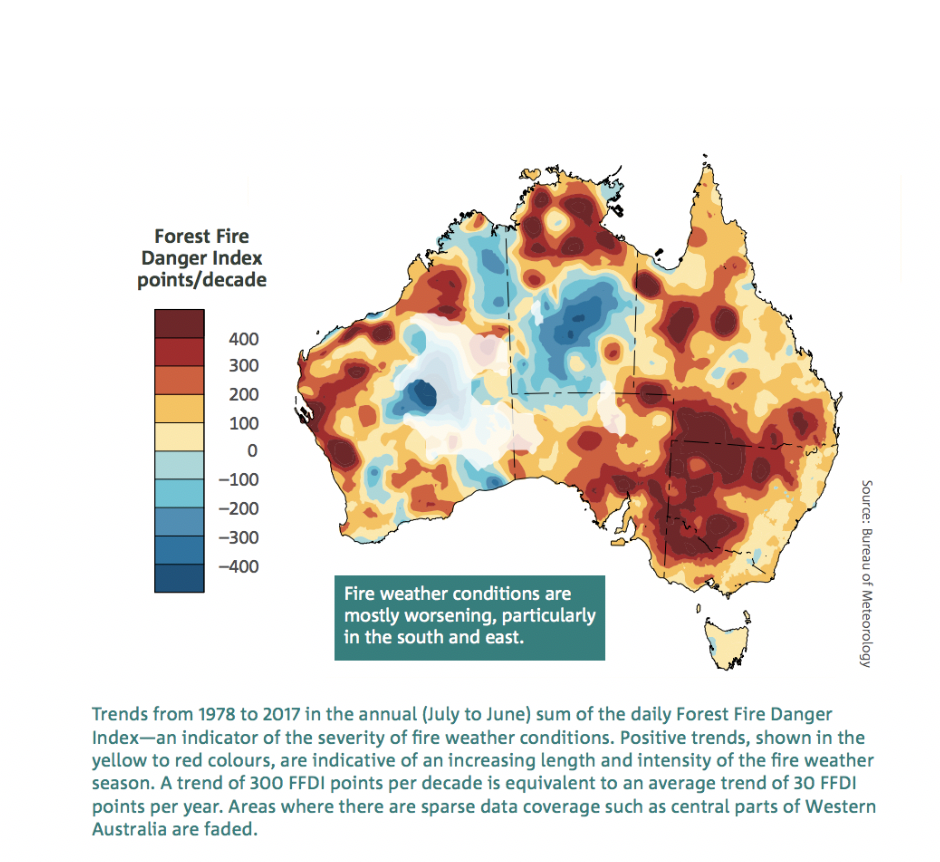 Australia’s state of the climate report 2018, issued in 2019, said that there has been a “long-term increase in extreme fire weather, and in the length of the fire season, across large parts of Australia.” Climate change, including increasing temperatures, is contributing to these changes,” said the report by CSIRO and the Australian Bureau of Meteorology.

Fire weather is largely monitored in Australia using the Forest Fire Danger Index (FFDI). This index estimates the fire danger on a given day based on observations of temperature, rainfall, humidity and wind speed. The most extreme 10 per cent of fire weather days) has increased in recent decades across many regions of Australia, especially in southern and eastern Australia. There has been an associated increase in the length of the fire weather season. Climate change, including increasing temperatures, is contributing to these changes, according to the state of the climate report.

Australia’s climate has warmed by just over 1 °C since 1910, leading to an increase in the frequency of extreme heat events.

There has been a decline of around 11 per cent in April–October rainfall in the southeast of Australia since the late 1990s.

Australia is projected to experience: • Further increases in sea and air temperatures, with more hot days and marine heatwaves, and fewer cool extremes. • Decreases in rainfall across southern Australia with more time in drought, but an increase in intense heavy rainfall throughout Australia

Australia's State of the Climate in 2018