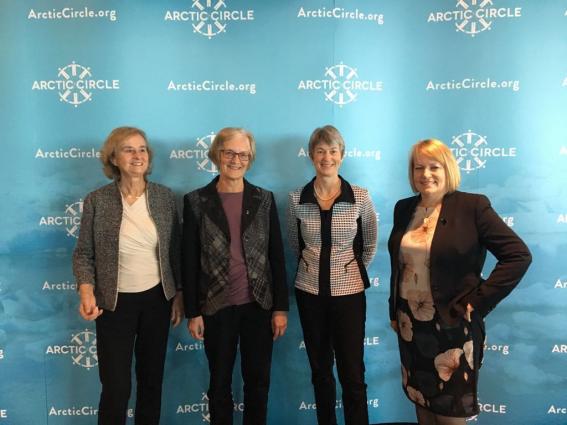 The International Day of Women and Girls in Science is marked on 11 February to improve access for women to technology, science education and technical training and to strengthen the position of female scientists and technologists.

WMO actively encourages more women to become meteorologists, hydrologists, climate scientists and oceanographers and nurtures leadership talent through dedicated training workshops and conferences to help women break through the so-called glass ceiling. In celebration of the International day of Women and Girls in Science, WMO is publishing an interview with four remarkable pioneers who broke through both the glass and the ice ceiling. All are the first female heads of their respective institutes. They occupy some of the most powerful positions in Polar science and have paved the way for others to follow. 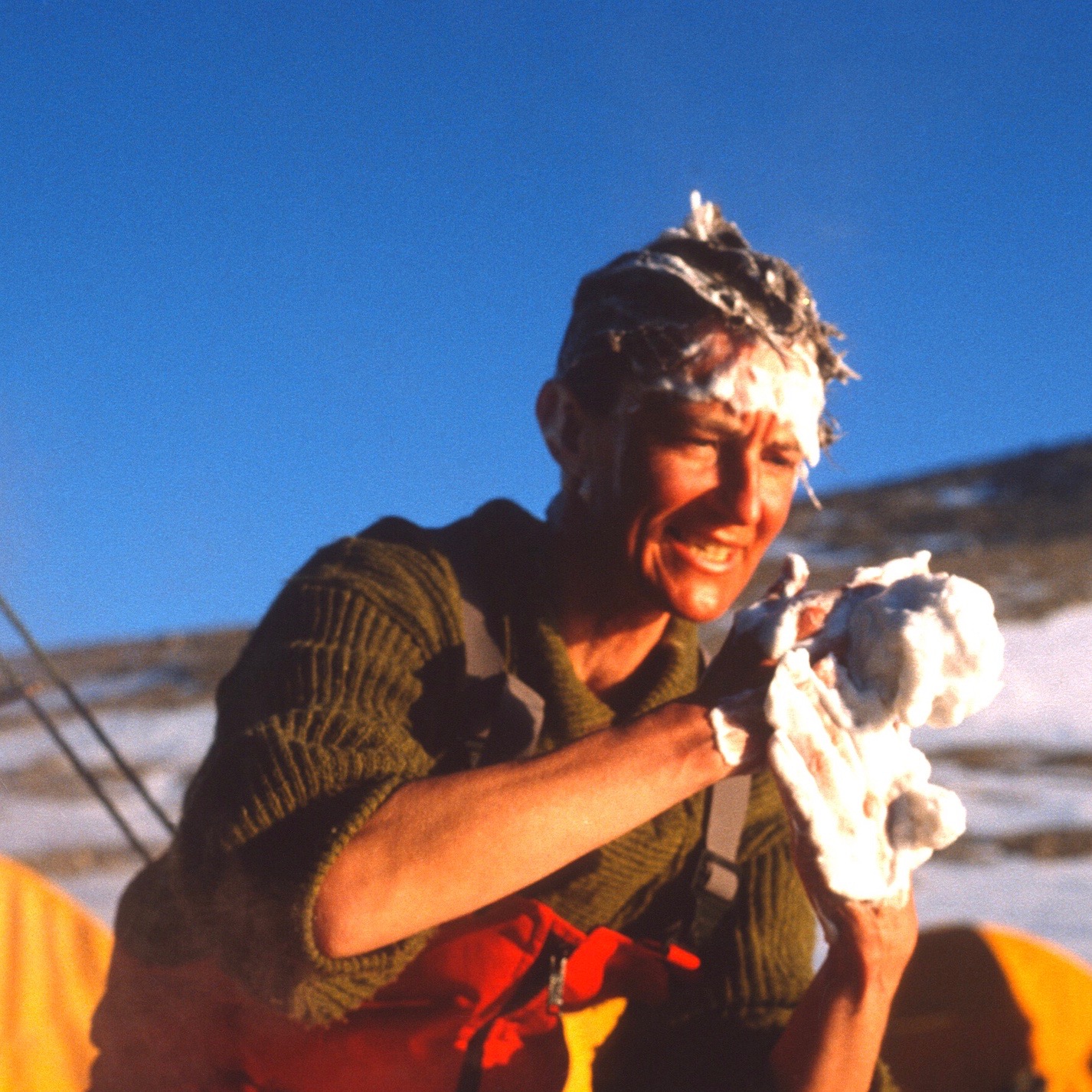 President of the International Arctic Science Committee, a non-governmental, international scientific organization which encourages and facilitates cooperation in all aspects of Arctic research, in all countries engaged in Arctic research and in all areas of the Arctic region. She has worked for 40 years with polar history and the management of polar cultural heritage. 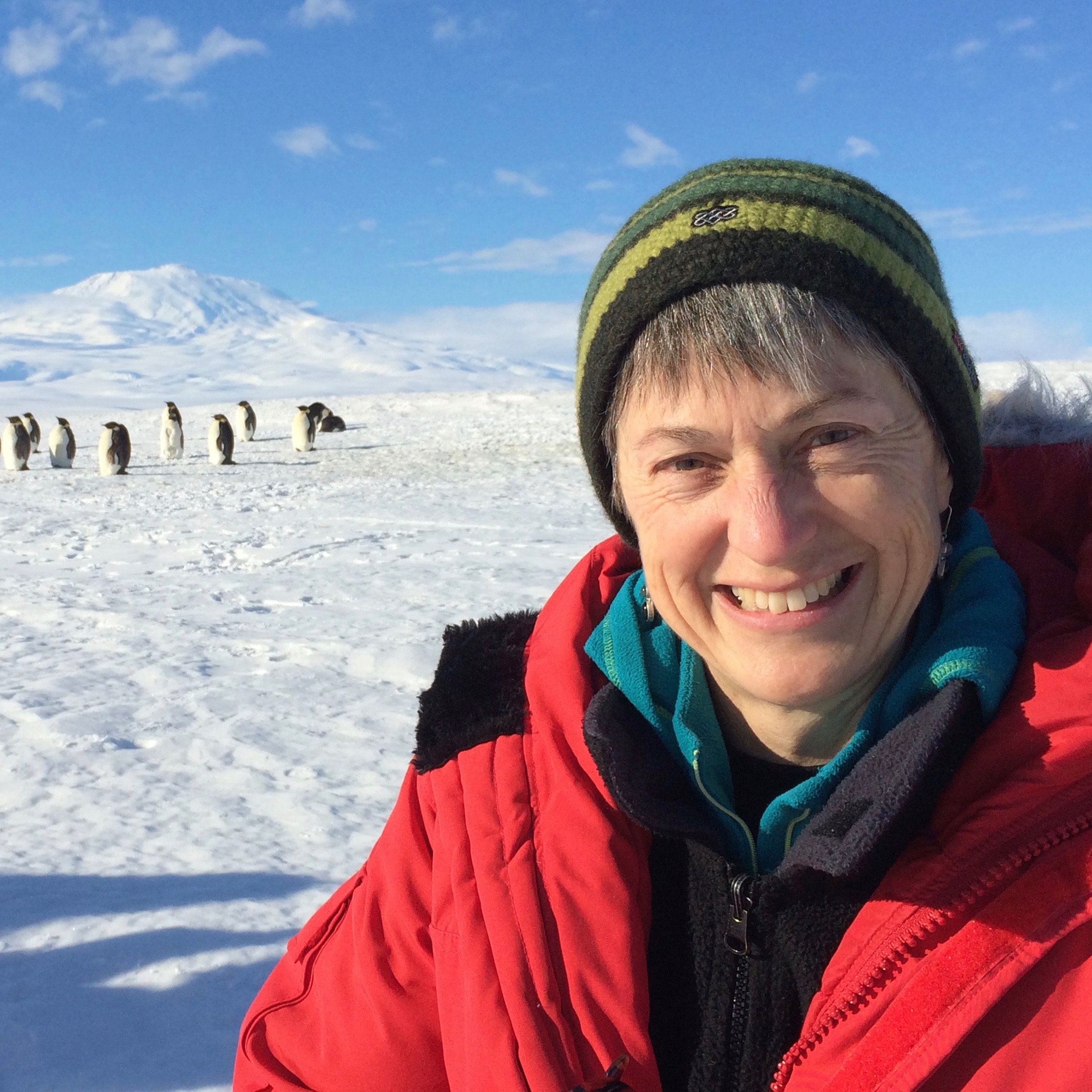 Director of the Office of Polar Programs at the US National Science Foundation. The office promotes scientific research, engineering, and education in and about the polar regions, catalyzing fundamental discovery and understanding of polar systems and their global interactions. The Falkner Glacier in Victoria Land, Antarctic, is named after her. 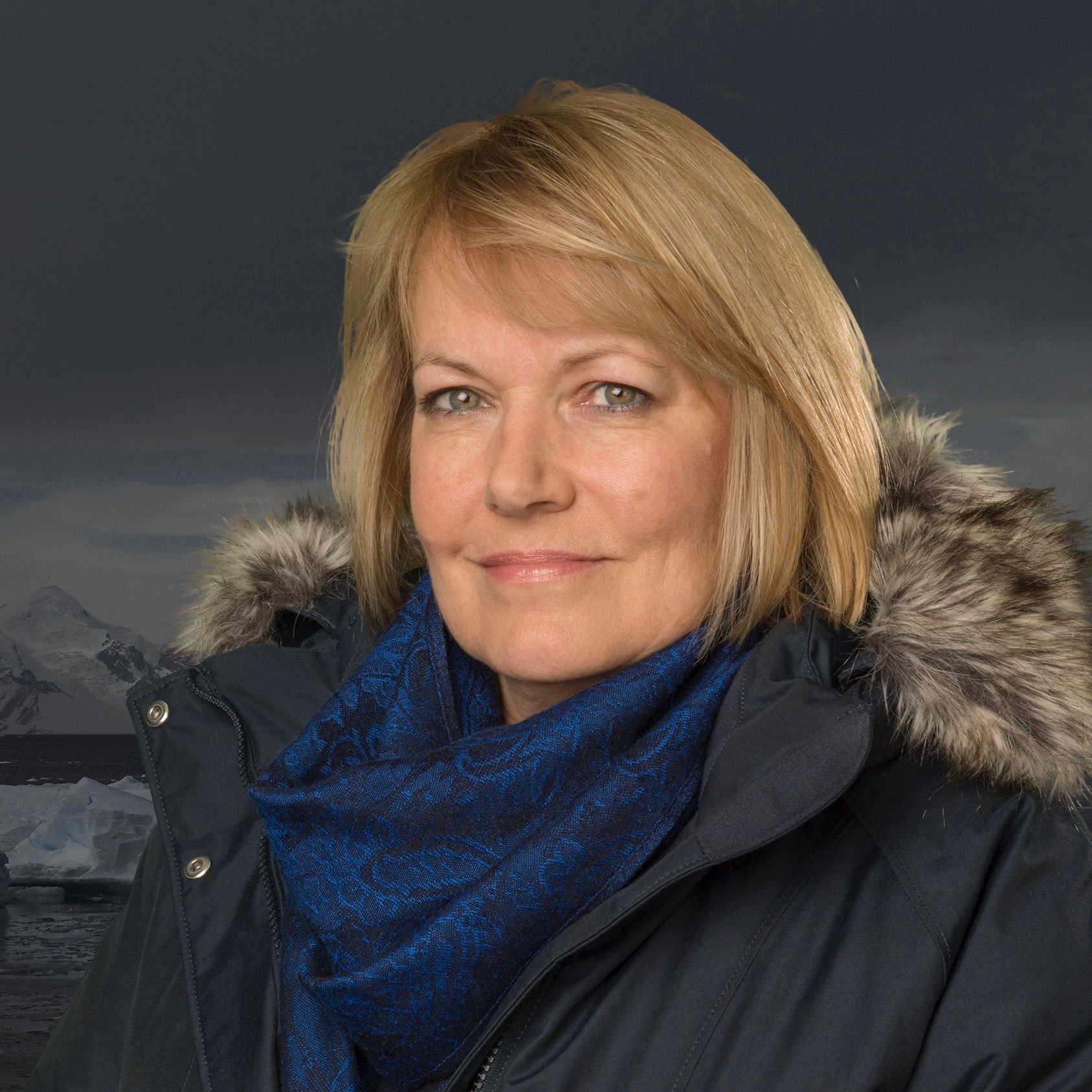 Director of the British Antarctic Survey, a research centre of the Natural Environment Research Council that undertakes world-class research and logistic support in the polar regions. 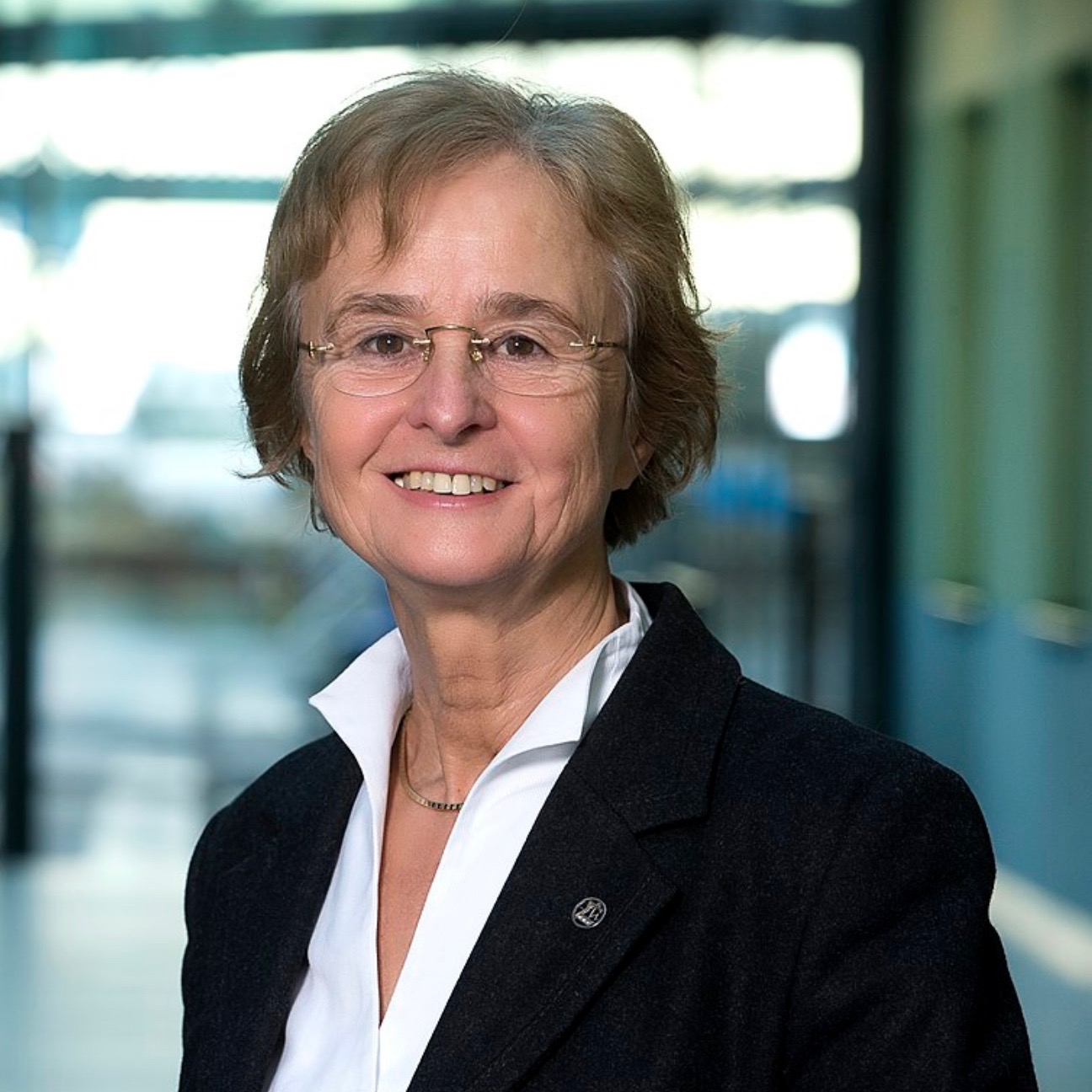 Outgoing Director of Alfred-Wegener-Institute’s Helmholtz Centre for Polar and Marine Research, Germany’s largest Polar research institute, and a vice-President of the Scientific Committee on Antarctic Research.

“It is the first time that women have held such simultaneous positions of authority. The likelihood of that happening all at once is slim, “ was the unanimous view voiced during the joint interview conducted in October 2017 at the Arctic Circle Assembly in Reykjavik, Iceland.  “We were chosen because of our competence and expertise and not because we are women.”

Here are some excerpts from the interview:

Susan Barr: I started my career in 1979 in Scandinavia with a degree in historical archaeology. I was appointed as the first cultural heritage officer for the Norwegian Arctic and I had to organize my own field work 10 weeks a year in Svalbard. In the second year, I was pregnant and people said you can’t sit in a Zodiac bouncing across the waves, but I did. In the third and fourth years, I had to take my baby with me because I had nowhere to leave her, and I used to point out that lots of women have had babies in the Arctic. I had a male assistant with me who happened to be my husband, and when I met scientists in the field they would talk to him and I had to point out that actually I was the boss.  I was the first woman to stay on the Arctic island of Jan Mayen, where women then were not allowed to be employed. Although I had incidents through the years, we can all tell anecdotes about being a woman in a man’s world, they were slightly annoying rather than serious and I never really thought about it.

Jane Francis: When I finished my degree in geology and was looking for jobs, most men on my degree got jobs on oil rigs. Some job adverts used to say at the bottom “women need not apply”. I wish I had kept those bits of paper!  But that’s because these jobs were in the middle east and also on oil rigs, where women were not employed at that time. That was in the 1970s. I almost changed career track and applied for jobs in operational research, but luckily I was offered a PhD in palaeoclimatology just in time.

Kelly Falkner: I started in oceanography when women were really just beginning to go to sea routinely. In the USA nuclear submarines were used for a while for research in the Arctic and women were not allowed to go. It shocked me when I was a young scientist. They wanted a chemical oceanographer to sample on behalf of the whole community. I thought long and hard because it would mean two months under water, but my science would benefit and I knew I was qualified so went ahead and submitted my application and got a phone call. My name is Kelly – which could be a male name – and as soon as the interviewer realized I was a woman, he started hemming and hawing on phone and then he literally hung up on me.  That was in 1991.

Karin Lochte: I am an oceanographer. When I started off on the first vessels, they only had communal showers. It was really difficult. I remember the first cruises. That was the middle of the 1980s. At the end of the 1980s new ships came with individual cabins and showers and that made things much easier.  When one of the captains retired, he came to me and said he had previously thought women would bring bad luck, but in fact it was much nicer with women on board. That was the biggest complement from such an old seaman.

Susan Barr: Young women are really surging ahead now. Nothing stops them. We used to sit in a corner waiting for someone to discover us. But they are no longer afraid to stand up in the middle of a meeting of very important men.  I live in Norway and we have a very strong gender equality programme. We have quotas and job ads that say women with equal qualifications will be preferred. This is not to say that the situation is 100% perfect yet.

Kelly Falkner: I run an organization which supports scientists rather than employing staff scientists. The statistics we keep show there is still a glass ceiling. There are plenty of young people coming on but they don’t rise to the top in many fields. Biology is doing better than others. Most physical science fields are not. Of most concern is diversity in polar science, which is particularly problematic. It’s a challenge that I feel we should really try and take on in a more concerted way.

Jane Francis: In the British Antarctic Survey, about 30 percent are women. Our science structure is similar to a university science department so we employ a lot of researchers, young research PhDs, and postdoctoral students, many of whom are women. We do have some senior women in BAS but, like many science organisations, we would like more. This Arctic Circle Assembly meeting is rather typical - there are few top women leaders but a lot of young women here. In the middle roles there is a gap. It’s often hard to get women scientists into senior roles because of carer issues.

Karin Lochte: At AWI, 30 percent of staff are female. At PhD level, it’s nearly 50 percent. At postdoc level, it reduces, and in professors it goes down to 20-25 percent. It is a historical imbalance, which will take a while to grow out. I am retiring soon and we will have another woman as director because she was really the best candidate by far.

Susan Barr: Scientists are surprised at the rate of change in Polar regions. The IPCC is surprised at the rate of change.  What is of most concern is what the thawing permafrost does in terms of infrastructure erosion around the coast, what it does to the settlements, the cultural heritage. It is changing the face of the Arctic.  In the main town of Longyearbyen in Svalbard, the valley sides are becoming unsafe.  In 2015 and ’16 we had two serious avalanches. We have to think about moving the entire older part of town. We are missing a link in reacting to climate change. The scientists are coming up with the trajectories, but we need authorities and the policy makers, to take more action.

Kelly Falkner: We have born witness to remarkable changes on our planet during the course of our careers.  We have deployed enough “eyes in the sky” to get a bigger picture of things going on the ground. For example, we used to think Arctic sea ice shrunk and grew seasonally but wasn’t really trending. And when we started to realize that this was not the case, it was unsettling because none of our models were picking up the changes fast enough.  Although the ice is diminishing, it’s a naïve assumption that we no longer need to build icebreakers. The retreating ice will lure marine traffic and escalate the need for icebreaker help under increasing storm conditions and the powerful and still unpredictable trap of seasonal ice conditions. For the National Science Foundation, it is very important to keep our eyes on the horizon and to be a reliable source of basic knowledge on climate change. Our job as scientists is to show what might change and what and where the impacts might be so that the rest of the world is informed and can decide when and how to mitigate and adapt.

Jane Francis: The melting of the West Antarctica is a major concern. This ice sheet doesn’t sit only on rock, it sits mostly below sea level. When warm water gets underneath the ice shelf it will melt from below..  Modeling suggests there will be critical thresholds, and there will be a point when the West Antarctic ice sheet may melt very slowly and then very fast. About 5 meters of global sea level rise is captured in that ice sheet.  Globally, even a small rise in sea level will impact on all coastlines. All the major cities in the world and the supply chains are on the coast so just a few centimeters of sea level rise will have a major impact.

Karin Lochte: You see politics moving, you see industry planning and the science is lagging behind. They want to know from us where the ice will be next season and we can’t tell them. We can’t really say how safe is oil drilling and what will happen if there is an accident. They are just moving ahead and this is what really worries me.   If we have business opportunities in the north you will have real problems in the south, so how do you adapt to that challenge? And that is something where it is really very short sighted because it means that people will want to migrate from the south to join the rich north. We really have to see the whole picture.