The annual growth rate of atmospheric carbon dioxide measured at the Mauna Loa Observatory in Hawaii jumped by 3.05 parts per million during 2015, the largest year-to-year increase in 56 years of research, according to the U.S. National Oceanic and Atmospheric Administration (NOAA).

The development is significant because Mauna Loa Observatory is the oldest continuous atmospheric measurement station in the world and is widely regarded as a benchmark site in the World Meteorological Organization’s Global Atmosphere Watch network.

WMO will issued its own report on greenhouse gas concentrations in 2015 later this year, based on data from 50 countries, including stations high in the Alps, Andes and Himalayas, as well as in the Arctic, Antarctic and in the far South Pacific.

In January and February 2016, the monthly average concentration of CO2 across the globe (not just Mauna Loa) passed the symbolic benchmark of 400 parts per million. In February, the level was 402.59 ppm, according to NOAA.

The jump in CO2 is partially due to the current El Niño weather pattern, as forests, plant life and other terrestrial systems responded to changes in weather, precipitation and drought, according to NOAA. The largest previous increase occurred in 1998, also a strong El Niño year.

“The impact of El Niño on CO2 concentrations is a natural and relatively short-lived phenomenon,” said WMO Secretary-General Petteri Taalas. “But the main long-term driver is greenhouse gas emissions from human activities. We have the power and responsibility to cut these.”

“This should serve as a wake-up call to governments about the need to sign the Paris Climate Agreement and to take urgent action to make the cuts in CO2 emissions necessary to keep global temperature rises to well below 2°C,” he said.

CO2 remains in the atmosphere even for tens of thousands of years, trapping heat and causing Earth to warm further. Its lifespan in the oceans is even longer. It is the single most important greenhouse gas emitted by human activities.

Concentrations of CO2 are subject to seasonal and regional fluctuations. The seasonal maximum usually occurs early in the Northern hemisphere spring before vegetation growth absorbs CO2 levels are lower for the rest of the year.

The amount of CO2 in the atmosphere has increased on average by 2 ppm per year for the past 10 years, reaching new record levels every year, according to WMO’s annual Greenhouse Gas Bulletin. The next Bulletin, based on observations from around the world, will be published in November 2016.

The Global Atmosphere Watch network spans more than 50 countries. All stations are situated in unpolluted locations. 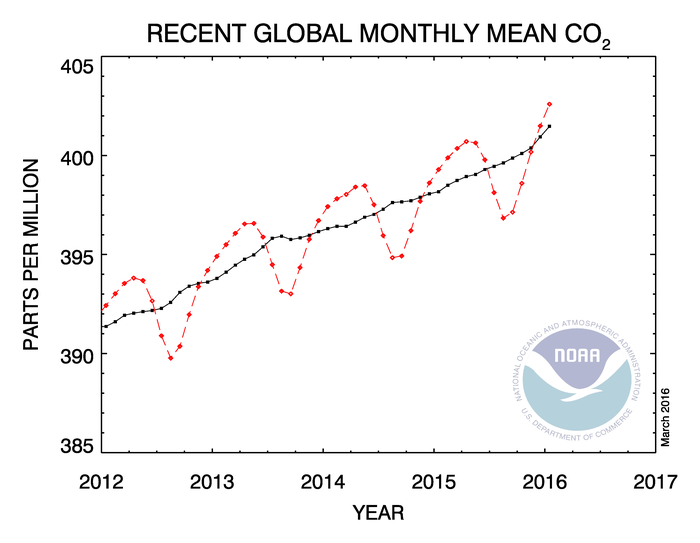