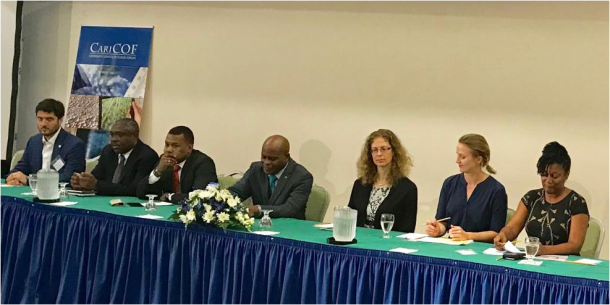 An initiative to strengthen multi-hazard early warning systems in the Caribbean was launched on November 20 during the dry season Caribbean Climate Forum (CariCOF) meeting in Barbados.

The Caribbean region is highly exposed to high-impact hydrometeorological hazards such as hurricanes and tropical storms, causing floods, landslides and storm surge. In 2017, Hurricane Irma caused massive destruction in Barbuda resulting in the subsequent full evacuation of the island while Hurricane Maria caused devastation Dominica. Barbados suffered from flooding as a result of Tropical Storm Kirk in September 2018.

The project titled “Strengthening Hydro-Meteorological and Early Warning Services in the Caribbean” will be led by the World Bank together with the World Meteorological Organization (WMO) and the United Nations Office for Disaster Risk Reduction (UNISDR). At the regional level the led implementers will be the Caribbean Disaster Emergency Management Agency (CDEMA) and the Caribbean Institute of Meteorology and Hydrology (CIMH).

Hinkson lauded the multifaceted approach being used by this initiative which brings global partners together with regional partners for the first time.  “The Climate Risk and Early Warning Systems Initiative (CREWS) brings comparative advantage of all agencies together,” Hinkson added. This approach intends to build community resilience through a functioning, gender-inclusive, cascading early warning systems for the region.

The minister, who’s ministry is responsible for disaster risk management, acknowledged that, while the capacity of the national agencies was becoming stronger, most of them were still struggling with limited financial and human resources which resulted in the limited services.

Hinkson stated that support to regional centres in the Caribbean had the biggest potential for success.  A regional framework would help people make informed decisions during natural hazards, and would improve cooperation, and leverage more funding.

Ronald Jackson, Executive Director of the CDEMA, endorsed the support provided to small islands development, and advocated for more sustainable investment in national institutions. He also stressed the need to make provisions for people with disabilities.  “All of what we do will have an impact at community level. If we do not look at national level to sustain our current investments, they might not be here ten years from now.”

David Farrell, principal of the CIMH encouraged a gender informed early warning system.  “Communication is essential to leverage and extend what we have done so far,” he said. “CREWS builds on our vision of what we think the region can achieve”.

Participants in the launch included 65 representatives from meteorological, hydrological, disaster risk management and priority sectors, as well as key expert institutions and partner agencies from the region. This initiative is financed by the CREWS Initiative. Contributing partners include Australia, France (Chair), Luxembourg, Germany, and the Netherlands. Canada is also contributing to CREWS through support to WMO.

The discussion during the launch emphasized the need for high quality forecasts with timely warnings delivered to vulnerable communities and translated into preventive actions helped save many lives and reduced economic losses in the Caribbean Region during recent hurricanes ‘seasons.

According to WMO, between 1980 and 2007 nearly 98% of the disasters, 99% of causalities and 99% of the economic losses in this region were related to hydrometeorological and climate related phenomena. Climate change is expected to further exacerbate hazard levels while unplanned urban expansion and inadequate construction practices are continuously increasing vulnerability.