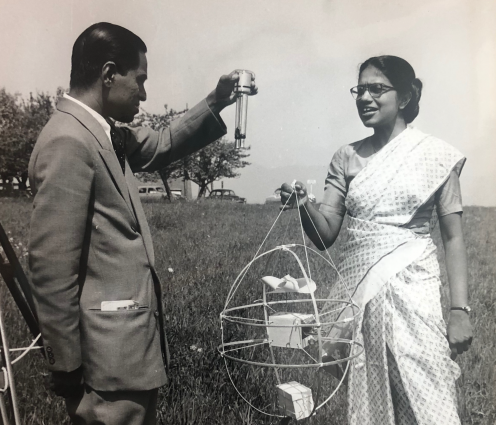 The life and career of Anna Mani, a pioneer Indian physicist and meteorologist, is being celebrated on what would have been her 100th birthday.

Born on 23 August 1918, Ms Mani, made an invaluable contributions to both her country and the international community. She worked her way up to becoming Deputy Director-General of the India Meteorological Department and excelled in what was, at the time, a male dominated profession. Dedicated to science, accuracy and perfection, Ms Mani was an expert in designing and manufacturing a wide range of measuring devices—radiosondes, ozone and radiation instruments, anemometers, rain gauges, pyranometers, to name a few.

Ms Mani started her research career in 1940 at the Indian Institute of Science, Bengaluru under the supervision of Nobel Laureate Sir C. V. Raman, working on the spectroscopy of diamonds and rubies.

Ms Mani joined the India Meteorological Department (IMD) in 1948 and worked on an ambitious programme that made India self-sufficient by designing and manufacturing its own weather instruments. Her first job was to construct recording rain gauges, hygrographs, thermographs, barographs, barometers, anemographs and so forth. Thanks to her leadership in the field, India was in the forefront of countries where meteorological data, especially of solar radiation and wind, were used for studies of alternative sources of energy.

After retirement from IMD in 1976, she worked in the Raman Research Institute, Bengaluru, and later in collaboration with the Indian Institute of Tropical Meteorology (IITM), set up a field research unit to implement a project on the assessment of potential resources for solar and wind energy in India for the Department of Science and Technology, Government of India. She headed this project almost till the end of her life.

Internationally, Ms Mani held several key positions within the World Meteorological Organization (WMO). She was elected a member of the Commission for Instruments and Methods of Observation (CIMO) advisory working group in the mid-1960s, the radiation advisory group to the WMO/International Council for Science (ICSU) Joint Organizing Committee, the CIMO working groups on atmospheric electricity and on precipitation, and the Commission for Special Applications of Meteorology and Climatology (COSAMC) working group on radiation climatology. She also assisted WMO headquarters in revising the WMO Guide to Instruments and Observing Practices, and worked briefly in Egypt as an expert on radiation.

Ms Mani said she was fortunate to not experience professional discrimination in what was considered a man's world. She did not feel either penalized or privileged for being female. When asked if she had any advice to offer young professionals thinking of a career in meteorology, Ms Mani modestly replied:

'We have only one life. First equip yourself for the job, make full use of your talents and then love and enjoy the work, making the most of being out of doors and in contact with nature'.

Read her interview with Dr Hassam Taba featured in our WMO Bulletin, October 1991: Volume 40 No.4.