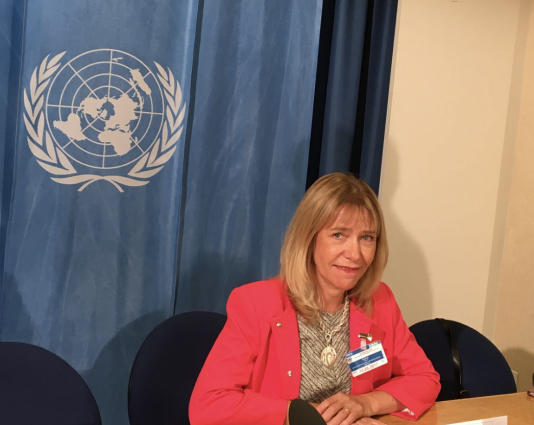 Celeste Saulo, Director of the Argentinean National Meteorological Service (SMN), has become the first woman to be elected a Vice-President of the World Meteorological Organization.

She is a member of the WMO Executive Council and a member of the Scientific Steering Committee of the World Weather Research Program. She is full professor at the University of Buenos Aires and research scientist at the National Council for Scientific and Technical Research.

Ms Saulo will support WMO President David Grimes, Assistant Deputy Minister and head of Environment and Climate Change Canada’s Meteorological Service. The positions of WMO President and Vice-Presidents are honorary. The WMO President presides over the sessions of Congress and the Executive Council, which guide WMO activities in research and services related to weather, water and climate.

“I am honoured and elated that my peers have put their trust in me to carry out this task. I eagerly join a highly professional and dedicated working group that conducts its day-to-day activities for the benefit of society through the improvement of meteorological, climate and environmental services around the world,” said Ms Saulo.

“I celebrate that a woman has been elected to this position, but above all, I hope that this appointment invites other women to trust in their abilities, take risks and seek support and consensus. All together, we must look forward to a fairer and more equitable society.”

Ms Saulo was elected to  the role of Second Vice-President. She will also serve as acting First Vice-President to fill the vacancy left by the departure of Rob Varley of the UK’s Met Office.

“I look forward to your future participation and effective contribution to the work of the Organization for the benefit of all our Members,” said WMO Secretary-General Petteri Taalas.

The election follows closely on the heels of the election of Manola Brunet (Spain) and Barbara Tapia (Chile) as the first female President and Vice President of WMO’s Commission for Climatology.