Climate Action is a priority and a driver of world affairs: UN chief 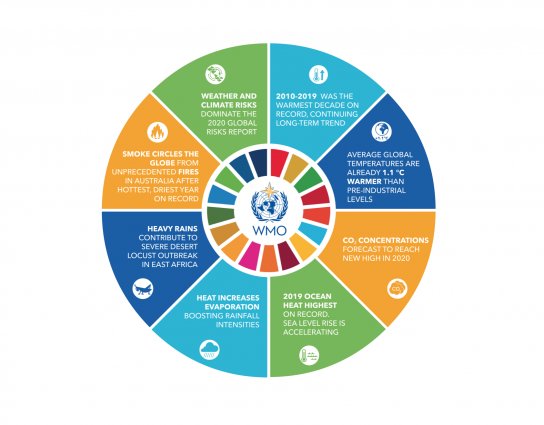 Climate Action is a priority and a driver of world affairs: UN chief

Climate action will be both a priority and a driver of world affairs through the coming decade, according to United Nations Secretary-General António Guterres.

Presenting his 2020 programme and plans for the Decade of Action to diplomats and journalists, Mr Guterres drew on World Meteorological Organization data to highlight the “vicious circle” of climate change.

“Analysis from the World Meteorological Organization showed that 2019 was the second hottest year on record, and that ocean heat content is at a record level,” he told the UN Group of Friends on Climate and Security on 3 February.

2019 concluded the warmest five-year and ten-year periods on record, with accelerating sea level rise, shrinking ice and much high-impact weather. The average global temperature last year was 1.1°C above the pre-industrial level. Each decade since 1980s has been warmer than the previous one.

New data from the Copernicus Climate Change Service/ECMWF showed that last month the global temperature was warmer than any previous January in this data record, slightly ahead of January 2016 (at 0.03°C warmer), when there was a powerful El Niño. For Europe, it was the warmest January on record, 3.1°C warmer than the average January in the period 1981-2010. Average temperatures were especially high over large parts of northeastern Europe and the Russian Federation, in some areas more than 6°C above the 1981-2010 January average.

Although regions of below-average temperature occurred over all major oceans, particularly in the southern hemisphere, air temperatures over sea were predominantly higher than the 1981-2010 average. Global means of the marine air temperature and underlying sea surface temperature were both close to the respective peak values that occurred at the time of the 2015/16 El Niño, said the monthly climate report.

“And as forests burn, the world loses vital carbon sinks and emissions skyrocket.  The smoke from Australia’s fires is now itself a literal vicious circle -- circling the globe, releasing the equivalent of as much as six months of the country’s total carbon emissions in 2018. What happens in Australia doesn’t stay in Australia – and the same can be said about any part of the world,” said Mr Guterres.

Carbon dioxide concentrations reached the highest ever daily average of 415.79 parts per million on 21 January (up from 413.21 ppm a year ago) at Mauna Loa Observatory in Hawaii. The observatory is the oldest continuous atmospheric measurement station in the world and is widely regarded as a benchmark site in the World Meteorological Organization’s Global Atmosphere Watch network.

The UK’s Met Office forecast that, for the first time, monthly CO2 levels will exceed 415 ppm at Mauna Loa during spring and summer and will remain above 410 ppm for the entire year.

CO2 remains in the atmosphere for centuries and the oceans for even longer.

Mr Guterres said that key international conferences in 2020 are opportunities for climate action. The Sustainable Transport Conference, which takes place in May, is a chance to “align our mobility systems with a climate-neutral world”.

In June, the Oceans Conference will be an opportunity to “reverse and end the assault on the world’s marine ecosystems and resources, including the rising tide of plastics pollution”, and at the Biodiversity COP15  conference in October, the world must “move decisively towards an ambitious post-2020 global biodiversity framework. Let’s not forget that one million species are in the near-term danger of extinction”.

Mr Guterres said that it is essential that the next UN climate conference, set to take place in Glasgow in November, is a success, following the “disappointment” of COP25.

“70 countries committed to carbon neutrality by 2050, including the European Union, but also many that have contributed least to the problem”, said Mr. Guterres. “That number represents less than one fourth of global emissions.  We must make this commitment universal”.