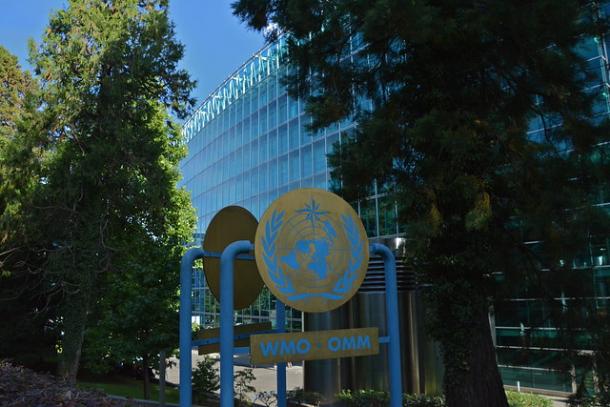 The increasing signs and impacts of climate change demand a much more focussed and integrated international response, the World Meteorological Congress was told today at the start of a session intended to sharpen action to meet the challenges.

“Changes in the climate system have been accelerating over the last few decades. The number of extreme weather, water and climate events is rising,” WMO President David Grimes told the opening ceremony of Congress, which is the top decision-making body of the World Meteorological Organization. “The size of the challenges we are facing related to these hazards cannot be overstated.”

“Socio-economic impacts are numerous and diverse, from food insecurity, public health, population displacement, and many others. Millions of people are affected every year and trends are only increasing,” said Mr Grimes, Assistant Deputy Minister and head of Environment and Climate Change Canada's Meteorological Service.

This means that traditional weather forecasts are no longer enough.

National meteorological and hydrological services face unprecedented demand for their information and expertise in the domains of climate, urban, air quality, hydrological, polar and high mountain services. And the demands are growing as a result of more extreme weather and urbanization, said Mr Grimes. 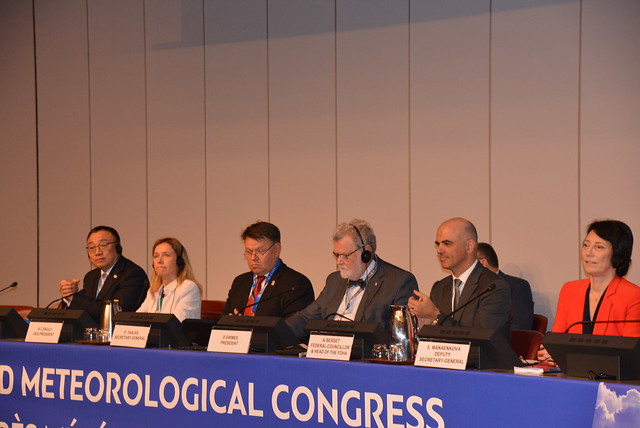 In response to these demands, that the World Meteorological Congress is to consider proposals for ambitious reforms to chart a course for WMO’s future agenda, to streamline its decision-making and governance procedures and to embrace new partnerships. It seeks to anchor water and ocean activities firmly into WMO’s core priorities and to embrace a more integrated Earth-systems approach.

The Congress takes place every four years and decides on the strategy, policies, standards, budget and office holders of the 193-member WMO.

It is due to approve a new WMO strategic plan to achieve its overarching vision: “By 2030, a world where all nations, especially the most vulnerable, are more resilient to the socioeconomic impact of extreme weather, water, climate and other environmental events; and empowered to boost their sustainable development through the best possible services, whether over land, at sea or in the air.”

Now more than ever, WMO’s expertise on climate change as the voice of scientific integrity and authority is needed, Swiss Federal Councillor and Interior Minister Alain Berset told the opening session. 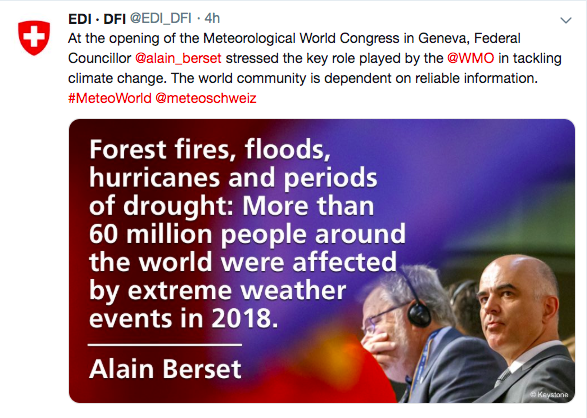 Congress heard from WMO’s two newest members – mountainous Andorra and the tiny low-lying Pacific island state of Nauru – about the need for strong meteorological services in an era of climate change.

Nauru had always relied on local traditional knowledge for weather forecasts and so only recently set up a national meteorological service for the 10,000 inhabitants.

“Today’s new global threat is climate change and it is changing everything,” said Roy Harris, Permanent Secretary of the National Emergency Service Ministry. Rising sea levels is increasing coastal erosion and there is more extreme weather including heatwaves. “Even the toughest skin of an islander is getting sunburnt,” he said.

“My wish is that my country will finally become weather-ready, climate-smart and water-wise,” said The Gambia’s minister of fisheries and water resources, James F. P. Gomez. He also set out the scale of the climate change challenges faced by his country: with a one-meter rise in sea level, 10% of its land will be gone.

“Climate change does not affect everyone and every part of the planet equally,” said Mr Grimes.

“Disadvantaged and vulnerable populations, indigenous peoples, and local communities dependent on agricultural or coastal livelihoods are at a disproportionately higher risk of adverse consequences of global warming,” he said.

One of the priorities of Congress will be to reduce the capacity gap between developed and least developed and to increase the ability of vulnerable countries to adapt to climate change and build resilience to extreme weather.

Only 27% of WMO Members have developed or advanced hydro-meteorological services, whilst 26% only deliver basic or inadequate services, WMO Secretary-General Petteri Taalas told Congress.

Some 94% of WMO Members have an established disaster risk reduction mechanism, but only 57% have impact-based forecasts, according to the most recent WMO survey.

Other items on the agenda include strengthening the observation network which underpins all forecasts; improved weather and climate services in an era of climate change and more extreme weather; hydrological services and support of sustainable water management; integrated Earth systems science; facilitating capacity development; engagement with the private sector and data policy.

There will be a dedicated ocean dialogue, a session on scaling up development partnerships, a parallel hydrological assembly and a public-private dialogue and Meteorological Technology world expo showcasing the very latest climate, weather and hydrometeorological forecasting, measurement and analysis technologies.