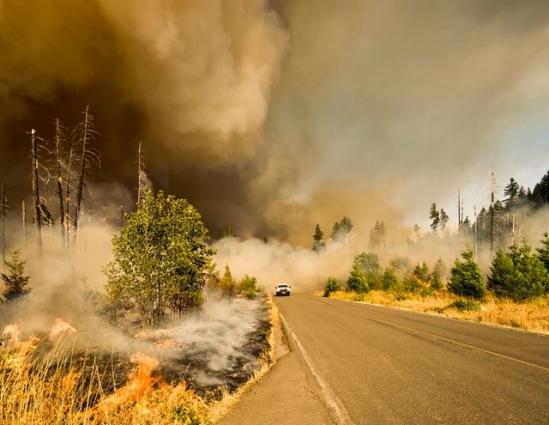 There is strengthened evidence that climate change increases the frequency and/or severity of fire weather around the world. Land management alone cannot explain recent increases in wildfires, according to an update from internationally acclaimed scientists.

An initial ScienceBrief Review on the link between climate change and wildfire risk was conducted in January 2020, reviewing 57 scientific articles. 116 scientific articles are now available. This update focuses on articles relevant to the wildfires ongoing in the western United States, new findings relevant to the wildfires that raged in southeastern Australia during the 2019-2020, and new findings since January 2020.

It is part of a collection on Critical Issues in Climate Change Science, prepared for the COP26 climate conference to be held in Glasgow (2021).

The Northern hemisphere just had its hottest summer and hottest August on record, according to the US National Oceanic and Atmospheric Administration. The most notable temperature departures from average during August 2020 included the western contiguous United States. The states of California, Oregon and Washington have been worst hit by wildfires, with dozens of casualties, razing entire neighbourhoods to the ground and forcing the evacuation of thousands of people. At the end of September, the US National Weather Service said that another extended heatwave is returning to South West California, and warned of more critical fire day for parts of California because of high temperatures, dry conditions and gusty winds.

According to the ScienceBrief Review Update, new scientific publications reviewed since January 2020 strengthen the evidence that climate change increases the frequency and/or severity of fire weather – periods with a high fire risk due to a combination of high temperatures, low humidity, low rainfall and often high winds – in many regions around the world.

The western United States is among the regions where the trends in fire weather have been most pronounced in the past at least 40 years. Fire activity is influenced by a range of other factors including land management practices. However, land management alone cannot explain recent increases in wildfire extent and intensity in the western US or southeast Australia because increased fire weather amplifies fire risk where fuels remain available.

The new analysis shows that:

Major wind-driven ocean currents are shifting toward the poles

The severe droughts in the USA and Australia are the first sign that the tropics, and their warm temperatures, are apparently expanding in the wake of climate change. But until now, scientists have been unable to conclusively explain the reasons for this, because they were mostly focusing on atmospheric processes, according to a separate study from Germany’s Alfred Wegener Institute, Helmholtz Centre for Polar and Marine Research in Bremerhaven (AWI).

“Now, experts at the AWI have solved the puzzle: the alarming expansion of the tropics is not caused by processes in the atmosphere, but quite simply by warming subtropical ocean.

“Our simulations show that an enhanced warming over the subtropical ocean in both the Northern and Southern Hemispheres are the main drivers,” said the AWI report in the Journal of Geophysical Research Atmospheres.