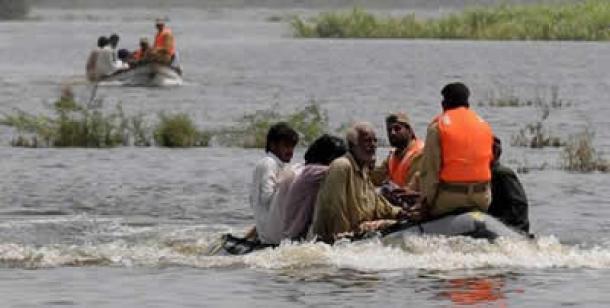 Dr. Qamar uz Zaman Chaudhry, Pakistan’s Permanent Representative to WMO and Advisor, Climate Affairs, to the Government of Pakistan, said in a statement:. “Sometimes it is difficult to relate individual extreme weather events to a climate change. But if we look at the frequency and the trend of the extreme weather events impacting Pakistan during the last two decades, then it is easy to find its linkage with climate

He said the rains in Sindh are the highest ever recorded monsoon rains during a four week period. Sindh this year received 270% and 730 % above normal monsoon rains respectively in August and September.  Before the start of these rains in the second week of August, Sindh was under severe drought conditions and it had not received any rainfall during the last 12 months.

Dr Qamar said that the rainfall was predicted well in advance by PMD and the disaster management agencies were also well prepared. But the scale of this natural calamity combined with the topography of the area having very poor natural drainage and other factors further complicated the scale of flooding.

Over the past year, WMO has been working with PMD on an Integrated Flood Management plan. As a result of these continued efforts, Pakistan has installed a Flash Flood Guidance System to help provide warnings about the imminence of potential flash-flooding. The development of such a system was the result of a WMO Expert Mission that visited Pakistan last November.

WMO in cooperation with partners continues to assist the PMD in the rehabilitation of the meteorological and hydrological network for improved flood forecasting. >>More details.