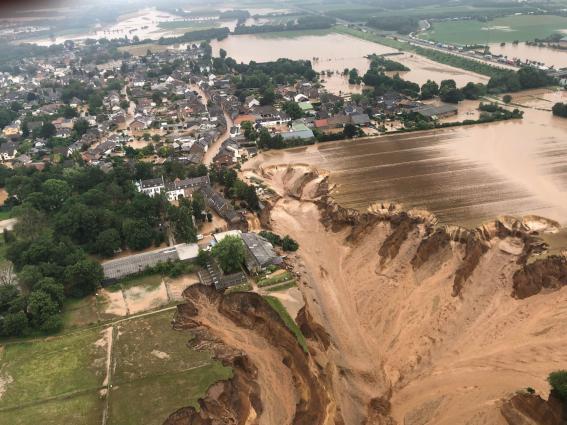 Climate change has made extreme rainfall events similar to those that led to last month’s floods in Germany, Belgium, the Netherlands and Luxembourg between 1.2 and 9 times more likely to happen, according to a rapid attribution study by an international team of climate scientists, which also found that such downpours in the region are now 3-19% heavier because of human-caused warming.

The results reinforce the conclusions of the new report by the Intergovernmental Panel on Climate Change (IPCC), which said there is now unequivocal evidence that humans are warming the planet’s climate and human-caused climate change is the main driver of changes in weather extremes. The report found that, as temperatures rise, Western and Central Europe will be exposed to increasing extreme rainfall and flooding.

Extreme rainfall hit parts of Western Europe from 12-15 July. More than 90mm fell over a single day around the Ahr and Erft rivers in Germany, far more than previous records. The resulting floods killed at least 220 people in Belgium and Germany.

The study was conducted by 39 researchers as part of the World Weather Attribution group, including scientists from universities and national meteorological and hydrological agencies in Belgium, France, Germany, Luxembourg, the Netherlands, the US and the UK. This international collaboration analyses and communicates the possible influence of climate change on extreme weather events, such as storms, extreme rainfall, heatwaves, cold spells, and droughts.

“These floods have shown us that even developed countries are not safe from severe impacts of extreme weather that we have seen and known to get worse with climate change. This is an urgent global challenge and we need to step up to it. The science is clear and has been for years,” said Dr Friederike Otto, Associate Director Environmental Change Institute, University of Oxford, co-lead of the World Weather Attribution group and an IPCC lead author.

To calculate the role of climate change on the intense rainfall that caused the floods, the scientists analysed weather records and computer simulations to compare the climate as it is today, after about 1.2°C of global warming since the late 1800s, with the climate of the past, following peer-reviewed methods that underpinned some of the key findings of the the IPCC report.

“We combined the knowledge of specialists from several fields of study to understand the influence of climate change on the terrible flooding last month, and to make clear what we can and can not analyse in this event. It is difficult to analyse the climate change influence on heavy rainfall at very local levels, but we were able to show that, in Western Europe, greenhouse gas emissions have made events like these more likely,” said Dr Sjoukje Philip, Climate Researcher, Royal Dutch Meteorological Institute (KNMI)

The study focused on the extreme rainfall that triggered floods in two areas that were particularly affected: the Ahr and Erft region of Germany, where, on average, 93 mm fell in one day, and the Belgian Meuse region, where 106mm fell in two days. The scientists analysed rainfall rather than the river levels partly because some measurement stations were destroyed by the floods. 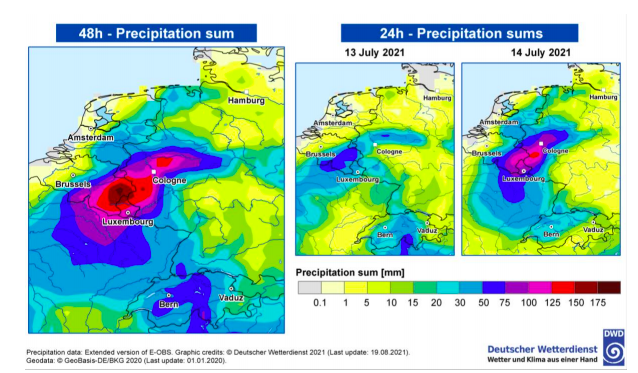 The scientists found a large amount of variability from year to year in these very local rainfall patterns, so to evaluate the influence of climate change, the scientists looked at data from a wider region. They analysed how likely it is that similar extreme rainfall could occur anywhere across a larger area of Western Europe, including eastern France, western Germany, eastern Belgium, the Netherlands, Luxembourg and northern Switzerland, and how this has been affected by increasing global temperatures.

For this larger region, the scientists found that human-caused climate change increased the amount of rain that fell in one day by 3-19%. Climate change also made heavy rainfall events similar to those that triggered the floods more likely to happen by a factor of between 1.2 and 9.

Similar events can be expected to hit any particular area of Western Europe about once in 400 years in the current climate, meaning several such events are likely across the wider region over that timeframe. With further greenhouse gas emissions and continued temperature increases such heavy rainfall will become more common.

“Our state of the art climate models indicate increases in slow moving extreme rainfall events in a future warmer world. This event starkly shows how societies are not resilient to current weather extremes. We must reduce greenhouse gas emissions as quickly as possible, as well as improving emergency warning and management systems and making our infrastructure ‘climate resilient’ – to reduce casualties and costs and make them more able to withstand these extreme flooding events,” said Professor Hayley Fowler, Professor of Climate Change Impacts, Newcastle University

“The huge human and economic costs of these floods are a stark reminder that countries around the world need to prepare for more extreme weather events, and that we urgently need to reduce greenhouse gas emissions to avoid such risks from getting even further out of hand,” said Prof. Maarten van Aalst, Director, Red Cross Red Crescent Climate Centre and Professor Climate and Disaster Resilience at University of Twente