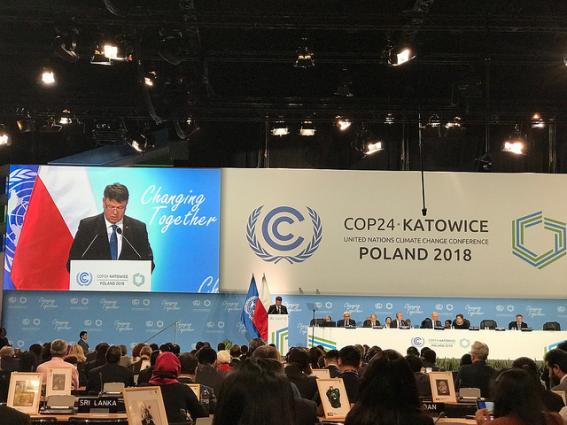 Climate science took centre stage as the annual United Nations climate change negotiations, which heard repeated calls for action to rein in global temperature increases or risk irreversible impacts.  The meeting in Katowice, Poland, concluded with the adoption of a set of guidelines for implementing the landmark 2015 Paris Climate Change Agreement, with the aim to benefit people from all walks of life, especially the most vulnerable.

The U.N. chief made two visits to the Polish city to urge the need for climate action, based on the findings of a series of scientific reports, including from the World Meteorological Organization and the Intergovernmental Panel on Climate Change.

“To waste this opportunity in Katowice would compromise our last best chance to stop runaway climate change. It would not only be immoral, it would be suicidal. This may sound like a dramatic appeal, but it is exactly this: a dramatic appeal,” Guterres told delegates. “The IPCC Special Report is a stark acknowledgment of what the consequences of global warming beyond 1.5 degrees will mean for billions of people around the world, especially those who call small island states home,” said the UN Secretary-General, who made two trips to the Polish city.

“The sooner emissions fall, the more options we keep on the table. Doing more now reduces reliance on unproven and risky techniques to remove carbon dioxide from the atmosphere. Doing less now would commit people today to the known risks of overshooting 1.5ºC, with severe risks of irreversible loss of ecosystems and shocks to the basic needs of the most fragile human societies,” he said.

Hoesung Lee was joined at the high-level session by WMO Secretary-General Petteri Taalas, who presented the latest findings on greenhouse gases and the state of the climate to assembled ministers and delegates.

"We are expecting at 2 to 4 percent increase in global carbon dioxide emissions this year. If we are are serious about the  Paris Agreement,  we need to see different numbers,” said Mr Taalas. WMO’s Greenhouse Gas Bulletin reported that CO2 concentrations in 2017 hit new records, at levels not seen in at least 3 million years. The Global Carbon Budget, published by an international consortium of researchers during COP24, said that emissions are expected to rise 2-4% this year.

“Sea level rise continues, ocean warming continues, melting of glaciers and sea ice continues. 75% of the Arctic ice mass has already melted. Your challenge is to mitigate climate change. It is not an easy task, “ said Mr Taalas.

Mr Taalas joined Mr Guterres in appealing to delegates to consider the long-term welfare of future generations rather than purely short-term economic growth.

Underlining the pace of climate change, NOAA published a new Arctic Report Card on 10 December. It said that the Arctic continues to warm at twice the rate of the rest of the globe, and may be contributing to extreme weather events in the northern hemisphere. Caribou and reindeer populations across the Arctic tundra have declined 56 percent from 4.7 million to 2.1 million animals over the last two decades, caused by loss of forage food, parasites, hunting, drought and climate warming. Sea ice remained younger, thinner and covered less area than in the past. Ice which is older than 4 years now makes up less than one percent of the ice pack.

Financial flows to developing countries for climate change adaptation were also a central theme of COP24. Mr Guterres called on developed countries must scale up their contributions to jointly mobilize US$100 billion annually by 2020.

The World Bank announced a new set of climate targets for 2021-2025, doubling its current 5-year investments to US$ 200 billion, both in mitigation and adaptation, in support for countries to take ambitious climate action.

Multilateral Development Banks announced the alignment of their activities with the goals of the Paris Agreement and in line With the science-based evidence identified by the IPCC. This represents US$ 35 billion in developing and emerging economies with an additional leverage on US$ 52 billion from private and public sources, said Mr Guterres.

WMO signed an agreement with the Green Climate Fund during COP to work together to leverage WMO expertise on weather, climate and water to increase effectiveness of GCF funded activities and support low carbon and climate resilient development.

A top-level WMO delegation, headed by Mr Taalas, attended COP24, organizing a series of side events and providing scientific support.

WMO photos at COP24 are here