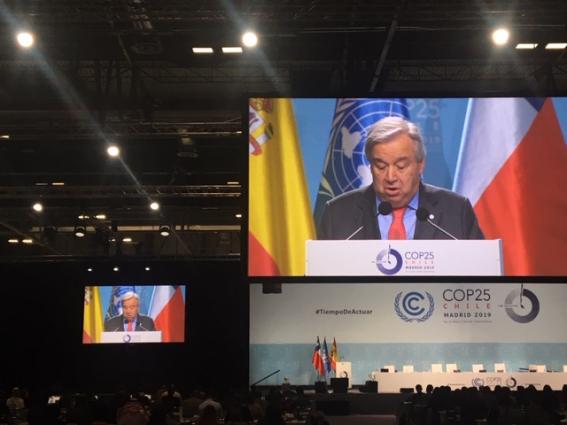 The latest climate science from WMO and the Intergovernmental Panel on Climate Change is informing negotiations at the annual United Nations Climate Change Conference.

“Do we really want to be remembered as the generation that buried its head in the sand, that fiddled while the planet burned?” he asked delegates.

“The latest, just-released data from the World Meteorological Organization show that levels of heattrapping greenhouse gases in the atmosphere have reached another new record high,” he said. “Global average levels of carbon dioxide reached 407.8 parts per million in 2018. Not long ago, 400 parts per million was seen as an unthinkable tipping point.”

“The signs are unmissable,” continued Mr Guterrez. “The last five years have been the hottest ever recorded. The consequences are already making themselves felt in the form of more extreme weather events and associated disasters, from hurricanes to drought to floods to wildfires.”

“Ice caps are melting. In Greenland alone, 179 billion tonnes of ice melted in July. Permafrost in the Arctic is thawing 70 years ahead of projections. Antarctica is melting three times as fast as a decade ago. Ocean levels are rising quicker than expected, putting some of our biggest and most economically important cities at risk” said Mr Guterres.

Ahead of COP25, WMO issued its Greenhouse Gas Bulletin on the state of atmospheric concentrations of leading long-lived greenhouse gases, including carbon dioxide, methane and nitrous oxide. All hit new records in 2018.

WMO issues its provisional statement on the state of the global climate in 2019 on 3 December. This shows that the long-term warning trend continued in 2019, with many high-impact events.

The latest climate science is highlighted at the joint IPCC-WMO Science Pavilion at COP25. This will host a number of side events throughout COP25. (WMO COP25 website)

COP25 will follow up the implementation of the Paris Climate Change Agreement.  This seeks to keep global mean temperature rise this century well below 2°C above pre-industrial levels and to pursue efforts to limit the temperature increase to 1.5°C. An Intergovernmental Panel on Climate Change Special Report on Global Warming of 1.5°C said this target was physically possible but would require unprecedented changes in our lifestyle, energy and transport systems.

“Our assessments show that climate stabilization implies that greenhouse gas emissions must start to peak from next year. But emissions are continuing to increase, with no sign of peaking soon, » IPCC Chair Hoesung Lee told the opening session.

“Our three special reports on warming of 1.5°C, climate change and land, and the ocean and cryosphere in a changing climate indicated that the impacts of current warming are much more severe than previously understood: e.g. accelerating sea level rise and ocean warming, some key ecosystems becoming much more vulnerable, and increasing risks of reaching limits to adaptation, » he said.