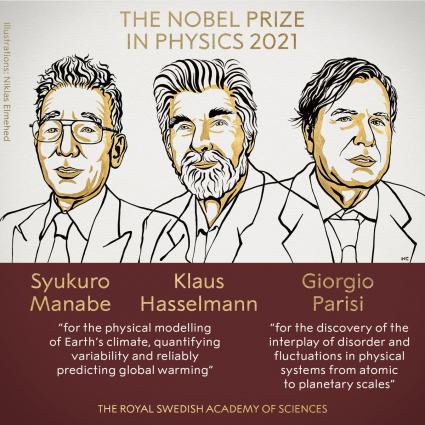 The World Meteorological Community and the international science community have welcomed the awarding of the 2021 Nobel Prize in Physics to pioneering climate scientists who laid the foundations for our understanding of the role of human activities and greenhouse gases in climate change. The award is especially timely as it comes on the eve of decisive UN Climate Change negotiations, COP26.

They share the prize with the Italian theorist Prof. Giorgio Parisi (Sapienza University of Rome, Rome, Italy) "for the discovery of the interplay of disorder and fluctuations in physical systems from atomic to planetary scales."

He stressed the urgency of translating the scientific knowledge into policy-making.

"The concrete action hasn't been ambitious enough so far. ... There's clearly a need to raise the ambition level. We cannot wait for decades to start acting," he added.

“As public awareness of climate change grows, it is encouraging to see the Nobel Physics Prize recognizing the work of scientists who have contributed so much to our understanding of climate change, including two IPCC authors –  Syukuro Manabe and Klaus Hasselmann,” said Dr Hoesung Lee, Chair of the Intergovernmental Panel on Climate Change. The WMO co-sponsored IPCC shared the Nobel Peace Prize in 2007.

Prof. Manabe was born in Japan in 1931 and studied at the University of Tokyo, where he received his PhD in 1958. He then moved to the United States to work on climate prediction using numerical simulations at the General Circulation Research Section of the National Weather Bureau. He has continued to work on global warming research at the Frontier Research System for Global Change in Japan and at Princeton University, where he has contributed to climate change prediction.

The numerical simulation techniques developed by Prof. Manabe, which take into account the interaction between the atmosphere and the oceans, are the basis of the Earth system modelling and predictions used today for long-term prediction and climate prediction, and are indispensable not only for global warming prediction but also for daily to seasonal forecasting.

Prof. Hasselmann was born in Germany in 1931 and earned his PhD at the University of the University of Göttingen and Max Planck Institute of Fluid Dynamics in 1957.  He has conducted research in the 1970s on the relationship between weather and climate. He also contributed to a better understanding of global warming and the responsibility of human activities. The methods he developed made it possible to prove this.