Climate Services for the Andes 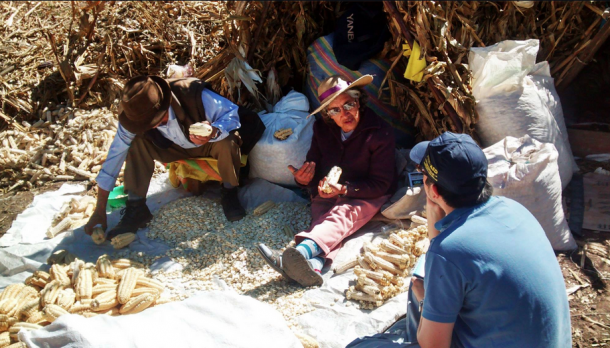 Climate Services for the Andes

In addition to improving climate services, the project also envisages the formation and training of students and professionals in meteorology and climatology.

The project is run by the Peruvian Meteorological and Hydrological Service, SENAMHI, and Federal Office of Meteorology and Climatology MeteoSwiss to improve climate services and transfer Alpine know-how to the Andes through a project known as CLIMANDES. It is financed by the Swiss Agency for Development and Cooperation (SDC) through the World Meteorological Organization (WMO).

“It is a very good example of cooperation between two mountainous countries which share many geographical and meteorological characteristics. It’s a good example of win-win cooperation,” said WMO Secretary-General Michel Jarraud.

A meeting took place with SENAMHI, MeteoSwiss, SDC and WMO during the World Meteorological Congress.

Peru is vulnerable to rising temperatures and the subsequent melting of Andean glaciers as well as ocean warming and acidification. These threaten the fabric of the country’s socio-economic development, including its water supply, agriculture, and its vital fisheries sector.

In Peru, the impacts of cold waves in the health sector and the losses due to extreme hydrometeorological events in the agricultural sector alone are estimated to amount to US$ 982 million per year, or approximately 0.5% of national GDP, according to one World Bank estimate. Improved services would help reduce these economic losses.

Nearly one third of Peru’s economically active population works in the agriculture sector. Rainfall patterns are changing and ancient techniques by farmers do not show the expected results. Vulnerable groups such as the rural population of the Andean region therefore desperately need better forecasts and support tools.

“The impact of climate change on the poorest segments of the population depends on the local and national capacities for adapting to change – which includes the ability of the government to make available reliable meteorological information and user-oriented climate services, ” said Anton Hilber, Head Global Programme Climate Change at SDC.

SENAMHI and MeteoSwiss conducted a pilot case study in the mountainous region of Cusco. It looked at the provision of advice when climate conditions favour the spread of a fungal disease which harms coffee (Peru’s top agricultural export), and early warnings against extreme weather for the maize crop.

The study estimated that the socio-economic benefits of such early warning systems would be at least US$ 10 million for a ten-year period in Cusco, and at least US $100 million at national level for coffee and maize alone.

As such, the CLIMANDES initiative will result in socio-economic benefits for numerous economic sectors and, hence, for society at large

“Climate services meeting the needs of smallholder farmers carry the potential for building resilience to climate change,” said Amelia Diaz Pablo, Executive President of SENAMHI. “As such they contribute to developing a climate-smart agriculture and thus, ultimately, enhancing food security and reducing poverty, especially in rural and mountainous regions.”

Building on the positive results of the first phase, the focus will now switch to expanding and upscaling the pilot project in the next phase planned for 2016 to 2018