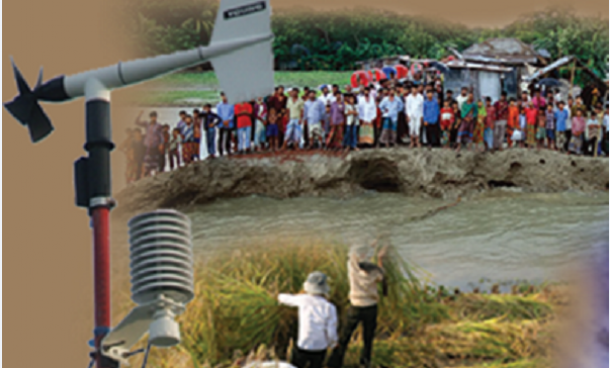 Bangladesh is one of the most flood-prone countries in the world due to its unique geographical location, topography and exposure to tropical cyclones. With 50% of the land less than 8 meters above sea level, and a coastline of some 600 km, coastal flooding is a common problem, as witnessed once again in 2017. However, loss of life in the densely populated South Asian nation has been greatly reduced by disaster risk reduction measures and early warning systems.

To improve coastal flooding forecasting capabilities in Bangladesh, the World Meteorological Organization (WMO) and Bangladesh Department for Meteorology (BMD) implemented a Coastal Inundation Forecasting Demonstration Project (CIFDP) over the last six years. The project was funded by USAID Office of U.S. Foreign Disaster Assistance and supported by a team of international experts. It was augmented by the EU sponsored Resilience Increasing Strategies for Coasts – Tool Kit (RISC-KIT).

During the implementation of the project, forecasters at BMD and a number of their key national partners worked with experts from meteorological agencies in Australia, Canada and Japan to develop an end-to-end forecasting and early warning system for flooding in the coastal region of Bangladesh. BMD successfully applied the Coastal Inundation Forecasting model in the three most recent cyclones, radically reducing the death toll compared to earlier years.

“The Bangladesh Meteorological Department is very happy about the completion of the project, which is very beneficial to various economic sectors and the people living in coastal regions of Bangladesh,” said BMD Director Shamssudin Ahmed at the project’s closing meeting in Dhaka from 28-30 November 2017. Over 18 national stakeholders including the Bangladesh Water Development Board, Red Crescent Society and Coastguard attended the meeting and discussed achievements, lessons learned and also the way forward.

“The outcome of the project is enabling the BMD to deliver science based warnings to reduces losses from storm surge and coastal flooding in the Bay of Bengal. BMD is very grateful to WMO and USAID who provided the funding for the project. BMD is also thankful to the national and international experts supporting the implementation of this project. We hope that in the future, WMO will continue providing technical assistance and support our continued capacity building, with new programmes and projects,” said Mr Ahmed. 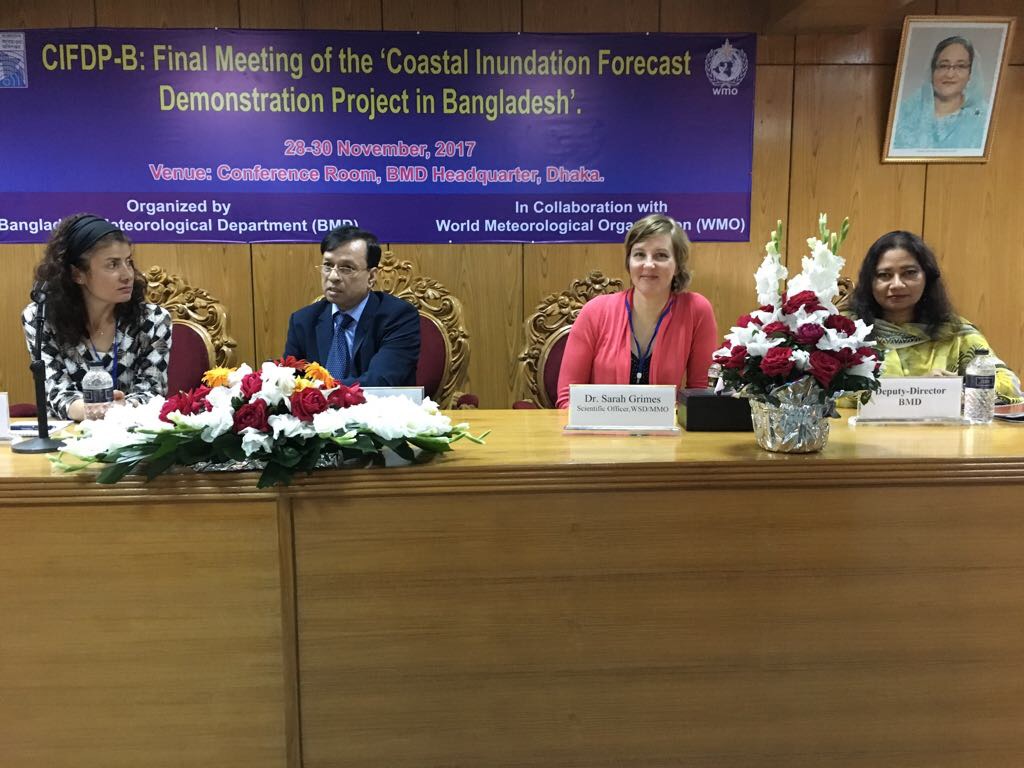 With the systems technologies and training, BMD is now able to provide improved information and new products to national and local authorities as well as non-governmental and community based organizations. This enables them to be prepared for, warn and respond to coastal water rises from both river and sea sources, and so saves lives and property.

“This project is an excellent example of forecast providers working closely with the end user community from the beginning, and with the international experts, to jointly develop the forecast system. This has created a true sense of ownership of the project by Bangladesh and supports sustainability and further enhancement of the Coastal Inundation Forecasting system,” said Val Swail, Co-Chair of the Steering Group for the project.

The value of these impact-based forecasts has already been seen in the reduction in casualties. It has also minimized loss of livelihoods and livestock such as sheep and buffalo, caused by coastal inundations. Linda Anderson-Berry, member of the Project Steering Group, underlined: “BMD has now the end-to-end early warning capability, that is based on the best science and technology available, communicated in a meaningful and timely way to local communities and emergency management authorities.”

The accuracy of the forecasts as well as the enhanced communications by BMD to users have substantially contributed to this improvement, as confirmed by meeting participants from different ministries and the Red Crescent responsible for emergency preparedness and response.

During the 2017 monsoonal floods, BMD issued warnings for expected continued heavy rainfall, and the Ministry of Disaster Management and Relief assessed that these could cause floods which would be the worst in the last four decades.

During 2017, according to WHO reports, and as of 28 September 2017, widespread flooding has killed 145 people in Bangladesh. The economic cost and disruption caused by the 2017 floods was high. A reported 145 people lost their lives. Without the early warning services, the death toll would have been even higher.

Bangladesh is mostly at sea level, subject to frequent storms and tropical cyclones, holds three major river basins and its complex river system in the coastal area is influenced by tidal dynamics. Sidr hit the country in 2007 with heavy rains, strong winds and storm surge. Around 3,000 people lost their lives, and damages amounting to $450 million were reported. In 1970 and 1991 cyclones caused high waves leading to flooding of coastal regions in Bangladesh and causing the death of over 500,000 and 138,000 people respectively. Implementation of the Coastal Inundation Forecasting model has reduced loss of life to a minimum in the three most recent cyclones.