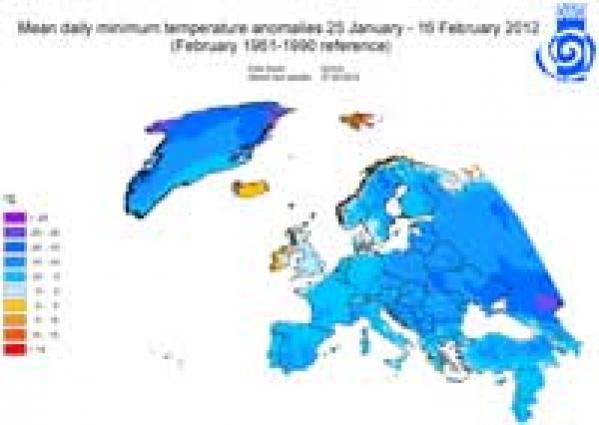 After unusually mild weather in December 2011 and early January 2012 almost all over Europe, the weather situation changed abruptly in the second half of January. An incursion of cold polar air, coming from northern Russia at the south flank of an extensive high pressure area brought a sudden cooling to almost the whole Eurasian continent). During that cold spell, also some considerable snowfall occurred over various parts of the continent. In the first half of February, the cold wave started weakening first in Asia and in mid-February also in Europe.

A detailed analysis prepared by WMO’s Regional Climate Centres for Europe (Deutscher Wetterdienst) and Asia (Japan Meteorological Agency) explains how the Siberian high pressure system prevented mild marine air masses and North Atlantic storms from crossing Europe eastward. This “blocking system”, which was fully developed around 25 January, was extremely large in its extent that time. However, such a phenomenon is not unusual in a Northern hemisphere winter. A similar high pressure “blocking” situation also led to the cold winter of 2009/2010, when cold conditions started in mid December and continued over most of January and February.

Baltic countries, Belarus, northeastern Poland, Ukraine, northern Moldova, southern European Russia experienced minimum temperatures of around -30 °C, places in northern Sweden, northern Finland and northern and central Russia below -40 °C. In eastern Central Europe, minimum temperatures below -20 °C were measured in many places, in western Central Europe between -10 °C and -20 °C (e.g. Amsterdam -18.7 °C, Zurich -18.1 °C). The cold air extended even to southern Europe. Minima below -15 °C were recorded in several places around Turin in northern Italy. The Balkan Peninsula had minima mostly below -10 °C, locally below -30 °C in highlands of Romania and Turkey and down to around -24 °C in northern Greece and northern Serbia. However, most of these minimum temperatures were not new records. Local records were broken e.g. in Estonia, Bulgaria and Serbia.

In contrast, low pressure systems carried mild air across the North Atlantic northward via Iceland to the Arctic region. The temperatures in Svalbard, far north in the Arctic, reached repeatedly up to 5 °C in that time, being higher than in Milano (Italy) or in Istanbul (Turkey) In Svalbard; it was around 15° C warmer than normal.

The change in pressure pattern is well pronounced in the switch of the so-called Arctic Oscillation which reflects the difference in pressure between polar areas and mid-latitude areas. The long duration of the cold period, its relatively late onset and the extent of the cold area are exceptional, but not unique. Similar cold spells occurred several times during the past decades. In western and central Europe.