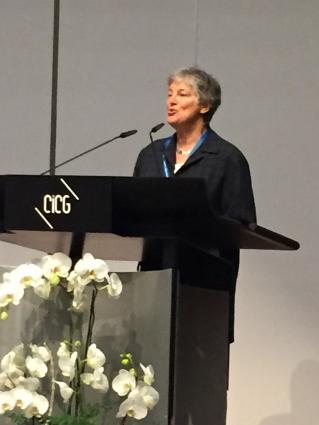 In a presentation to Congress on 29 May, Bérengère Quincy, an ambassador for the COP21 negotiations in Paris, outlined the French host’s ambitions for a sweeping Paris climate change accord based on four fundamental principals.

The first pillar and top priority is a universal accord to cut greenhouse gas emissions to keep the increase in global warming to a maximum 2 degrees Celsius above the pre-industrial era, she said.

“Our ambition is to achieve an accord which is sustainable, fair and dynamic and which gives governments and stakeholders the necessary signal to invest in a more resilient, low-carbon economy,” she said.

Because the accord will only enter into force in 2020, it is vital to cut greenhouse gas emissions in the intervening years, said Ms Quincy.

The second pillar is based on a “bottom-up” approach whereby national governments should announce national emissions cuts commitments in order to stay within the 2 degree limit.

Thirdly, she said, it was vital to commit the necessary financial resources to the Green Fund to support climate change adaptation. “If there is no agreement on financing, it will be difficult to reach an accord in Paris,” she said.

Ms Quincy said that WMO was a vital partner in the so-called “Solution Agenda” citing WMO action to strengthen weather and climate services .

“WMO will be an important partner to ensure that people in the most vulnerable countries can have access to multi-hazard early warning systems against weather and climate hazards,” she said, emphasizing the need to build the observing and surveillance network and to build national capacity.

The next round of the Paris climate agreement negotiations, leading up to COP21 in December, take place from 1 to 11 June in Bonn.