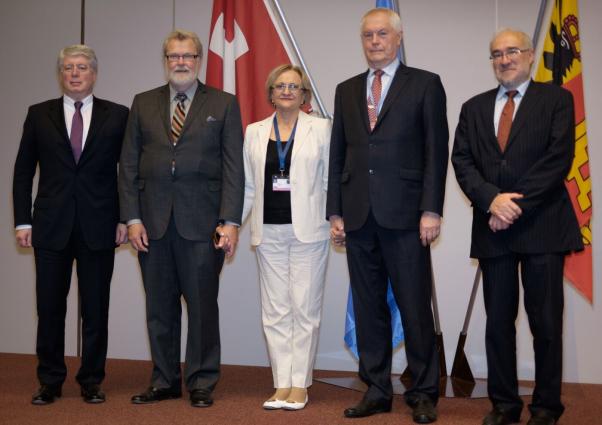 The World Meteorological Congress on Monday honoured Dr Alexander Bedritskiy of the Russian Federation, the President Emeritus of WMO since 2011, for his outstanding work in meteorology, climatology, hydrology and related sciences.

Dr Bedritskiy was presented with the IMO Prize, named after WMO’s predecessor organization the International Meteorological Organization, for his life-long contribution to meteorology.

“You are a highly respected scientist,” said WMO Secretary-General Michel Jarraud. “You have played a fundamental role in our organization.”

Dr Bedritskiy served as WMO President from 2003 to 2011. He made a major contribution to strengthening WMO and National Meteorological and Hydrological Services and to promoting recognition for their contributions to human well-being. He championed a number of initiatives to improve observing systems and data exchange, training capacity and research – especially in Polar regions.

He worked to deepen international cooperation and to ensure that the scientific expertise of WMO and meteorological services received greater attention in the broader international agenda, in particular post-2015 sustainable development and the UN climate change negotiating process. He was a member of the U.N. Secretary-General’s High-Level Panel on Global Sustainability from 2010-2012.

“Your skill, attention to detail, and your desire to do the right thing for the WMO community has ensured that WMO has always been on a strong footing,” said WMO President David Grimes.

In his acceptance speech, he emphasized the role of WMO as “an authoritative organization whose opinions are listened to all over the world.” He cited initiatives such as the World Weather Watch and Global Atmosphere Watch programmes as a model for international cooperation.

Ambassador Borodavkin, Permanent Representative of the Russian Federation to the United Nations and other international organizations in Geneva, described Dr Bedritskiy as “an authoritiative specialist and scientist who has dedicated his entire life to meteorology.”