COP24 action on Climate and Health 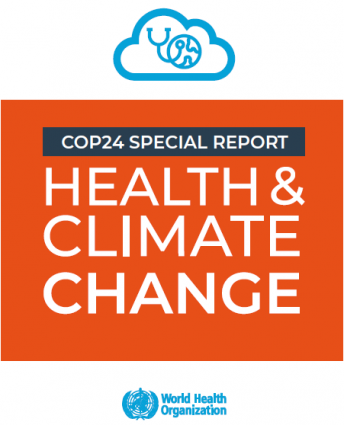 COP24 action on Climate and Health

Meeting the goals of the Paris Agreement could save about a million lives a year worldwide by 2050 through reductions in air pollution alone, and the value of health gains from climate action would be approximately double the cost of mitigation policies at global level, according to a new report from the World Health Organization.

The report, launched at the United Nations Climate Change Conference (COP24) in Katowice, Poland, said that exposure to air pollution causes 7 million deaths worldwide every year and costs an estimated US$ 5.11 trillion in welfare losses globally. In the 15 countries that emit the most greenhouse gas emissions, the health impacts of air pollution are estimated to cost more than 4% of their GDP. Actions to meet the Paris goals would cost around 1% of global GDP.

“The Paris Agreement is potentially the strongest health agreement of this century,” said Dr Tedros Adhanom Ghebreyesus, Director-General of WHO. “The evidence is clear that climate change is already having a serious impact on human lives and health. It threatens the basic elements we all need for good health - clean air, safe drinking water, nutritious food supply and safe shelter - and will undermine decades of progress in global health. We can’t afford to delay action any further.”

The report was showcased at a side event during COP24. WMO, which has a joint climate and health office with WHO, participated.

“When health is taken into account, climate change mitigation is an opportunity, not a cost,” said Dr Maria Neira, WHO Director of Public Health, Environmental and Social Determinants of Health, who moderated the side event.

Oksana Tarasova, Chief of WMO Atmospheric and Environment Research, highlighted how WHO and WMO work in partnership to improve health outcomes through better weather, climate, atmospheric and hydrological services. Priorities include improving the provision and use of climate services which are beneficial to the health sector, including seasonal forecasts and heat-health early warnings.

On air quality, Ms Tarasova said that WMO is following up on pledges made at WHO’s first ever Global Conference on Air Pollution and Health to reduce deaths due to air pollution by two thirds by 2030.  This includes commitments to strengthen the quality and availability of pollution observations, enable provision of air quality forecast and advisory services and incorporate health impacts in key scientific assessments on climate and climate change.

“We are working on providing actionable information and tools,” she said. WMO is working to improve integrated urban services embracing forecasts and monitoring of air quality and hazards such as heatwaves and flooding, because multiple hazards can happen simultaneously. But she cautioned that it was important to use a balance of policies which benefited both the climate and health.