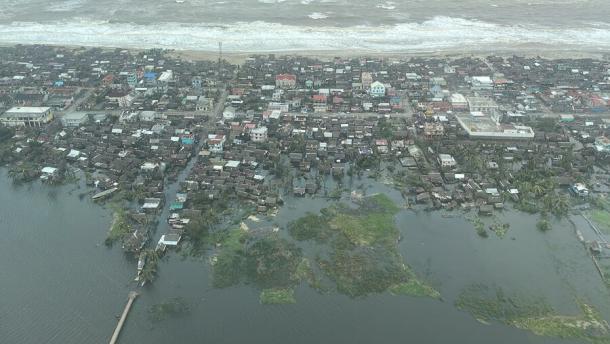 Tropical cyclone Batsirai made landfall in Madagascar on 5 February, bringing devastating winds, rainfall and flooding to the Indian Ocean nation which is still struggling with the aftermath of a previous tropical storm, Ana. Initial reports indicated that at least ten people were killed. Accurate and timely early warnings and a coordinated response helped limit the number of casualties.

Batsirai made landfall at about 19.00  local time, 14 kilometers to the town of Mananjary as a Category 3 equivalent storm, with sustained average windspeeds of 165 km/h and gusts of up to 230 km/h, according to Meteo Madagascar. It then weakened as it crossed the country towards the Mozambique Channel, and is curving to the South-East, away from southern Africa.

World Food Programme staff at the scene reported that Mananjary was devastated, with houses destroyed by the wind, and was only accessible by air. Humanitarian agencies and government authorities had mobilized aid efforts ahead of landfall, on the basis of the advance forecasts from WMO’s regional tropical cyclone centre La Réunion (Météo-France) and Meteo Madagascar.

The Office for the Coordination of Humanitarian Affairs (OCHA) said that preparations, under the Government’s leadership, included the pre-deployment of search and rescue capacity and response teams to areas likely to be impacted, aircrafts being placed on standby to support rapid assessment and response, and local purchases of humanitarian supplies to increase available stocks.

WFP said that 60,000 people could potentially be affected and 150,000 displaced is likely to increase further as river and canal levels keep rising. It will exacerbate the humanitarian situation which is already precarious as a result of tropical storm Ana, which hit in late January and affected at least 131,000 people, including 71,000 people who were displaced, according to authorities.

According to preliminary figures, the casualty toll was lower than from tropical storm Ana, which killed at least 48 people, almost all of them in the capital. The relatively limited death toll from Batsirai – a much more powerful storm – was testimony to the importance of early warning and coordinated early action.

Madagascar & Southern Mozambique should be near the height of the wet season but have experienced dry conditions when compared to what would normally be expected at this time of year. Because of the very dry ground, there is an increased the risk of flash flood, landslides during any extreme rainfall events.

Ana, the first named storm in the season, also caused heavy rain, flooding and a number of casualties in Mozambique, Malawi and Zimbabwe.